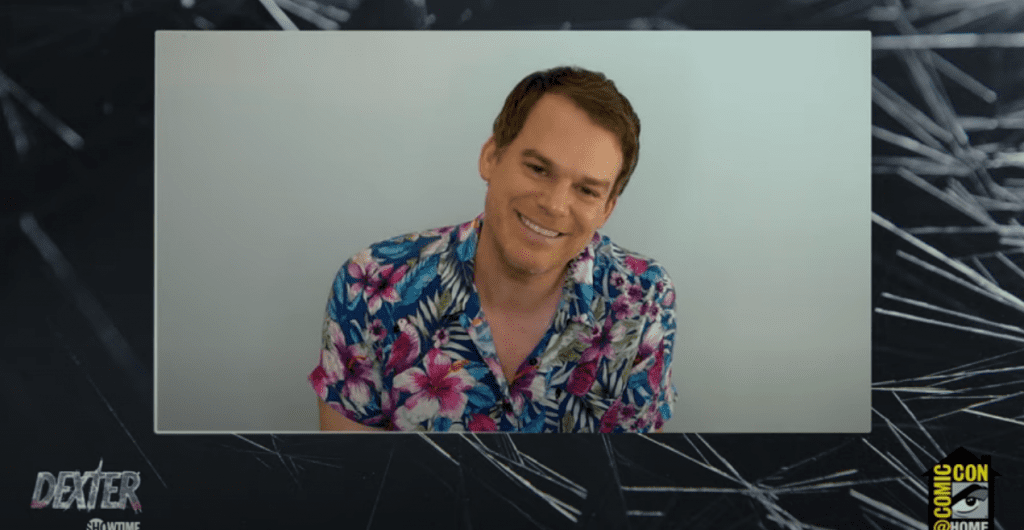 Its been eight years since “Dexter” aired its incredibly divisive series finale. Back in October of 2020, a revival of the show was announced by SHOWTIME. There were a number of people who hoped that this could be the fix that the series needed to wash the bad taste out of the mouths of fans. SHOWTIME has been heavily promoting the show’s comeback and the San Diego Comic Con (SDCC) 2021 virtual event was another big push to generate hype for the limited series.

Here’s what happened at the panel, which you can scroll down and watch in its entirety.

In a pre-recorded video, reporter Kristin Dos Santos held a discussion with “Dexter” star Michael C. Hall, incoming actress Julia Jones, producers and writers Clyde Phillips and Scott Reynolds, and Marcos Siega, the director of the majority of the 10 episodes that will make up this new season. Most of the 43 minute discussion was held by Hall and Phillips, which makes sense given they’re the main actor and showrunner respectively.

In essence, the discussion was nothing earth-shattering or phenomenal, largely because they weren’t able to say an awful lot about the show without potentially ruining things. There were a number of times where Michael had to pause and choose his words carefully in discussing Dexter’s current motivations and mental state. Additionally, most of the discussion basically stemmed from things we’d seen before as the previous two teaser trailers were replayed and questions were asked by Dos Santos about them.

Siega spoke a bit about some of the difficulties they faced in terms of shooting this series. Because the episodes take place during the winter and they needed to maintain that seasonal look, the episodes were all shot at the same time. So quite literally the crew was shooting external shots for episodes 1 and 10 on the same day because they needed to keep the visuals of the snow and scenery consistent. There was also a bit of discussion about how COVID-19 affected how they had to shoot the series and how it affected the working environment, but nothing about that was surprising.

There were a couple of plot details that were rather interesting however. It was confirmed that the series is taking place in the fictional town of Iron Lake, New York; a small town of about 2700 people. Speaking as someone who has lived in upstate New York in small towns his entirely life, I can confirm, they have this setting nailed down quite well. These small, backwoods placed are the kind of areas where everybody knows each other and nothing ever happens in a vacuum. Sure enough, Phillips and Reynolds confirmed that this is exactly the kind of social setting in Iron Lake.

They also confirmed that Julia Jones is playing the town’s chief of police. Not only is she the first woman to hold this role in the fictional town, but also the first person of color. They also stated that Dexter utilizes this relationship to have access to information that he or others normally wouldn’t have. While they didn’t go into detail about what that information was, that’s to be expected with trying to keep the story under wraps.

Also worth noting is that they confirmed that previous cast members would be returning. We already reported about John Lithgow being seen on set, and there’s also confirmation that Dexter’s late sister Deb will somehow be returning as well. Then again, considering Lithgow’s character of the Trinity Killer is also dead, well, I guess anyone is fair game to bring back as a flashback, hallucination, or vision.

The panel was very clear on stating that this revival is supposed to have a very different feeling as opposed to what we’ve seen previously on “Dexter.” This isn’t a character that we’re picking back up with after a month or two since we last saw him; nearly a decade of time has elapsed and Dexter is already established in this new town and in his relationship with the police chief.

As for what to expect with the series in general? Well, Phillips did point out that the show IS called “Dexter” so someone has to die! More intriguingly though, he also stated that the ending is going to, “blow up the internet.” One could argue that phrase is kind of cringeworthy at this point, which makes me think that perhaps Phillips is using the phrase in a more literal sense and the series will end with a bang.

After the discussion was done, they ended with a trailer that builds off of what we saw before in the previous two teasers. Again we see Dexter and his fascination with knives, his new identity as Jim Lindsay, his familiarity with people around town, and the notion that he is trying to hide something about his past. Just like the first teaser utilized “Don’t Let Me Be Misunderstood” to great effect, this one uses the Del Shannon song “Runaway.” It’s complimented by onscreen text that tells us, “You can hide from your past…” “But you can’t run away.”

There are some ominous images; Dexter hiding blood under snow, a masked person with a sniper rifle and a laser sight, what appears to be a SWAT team breaking into a building. Meanwhile, in off-screen narration, Dexter states that “Knowing if someone knows who I am, that’s it.” Given the whole premise of the series though has been Dexter trying to hide his identity and certain people discovering it over time, it would probably be more surprising if his cover didn’t get blown at some point in this season.

While the Comic Con video didn’t reveal anything about the show title or release date, the official SHOWTIME twitter and YouTube version of the trailer do tell us both. It’s likely the Comic Con video was shot and edited before SHOWTIME was willing to reveal the details.

The revival is officially titled, “Dexter: New Blood” and will premiere on Sunday, November 7th, 2021. We eagerly anticipate what Dexter as a character, and the team behind him, have waiting for us.