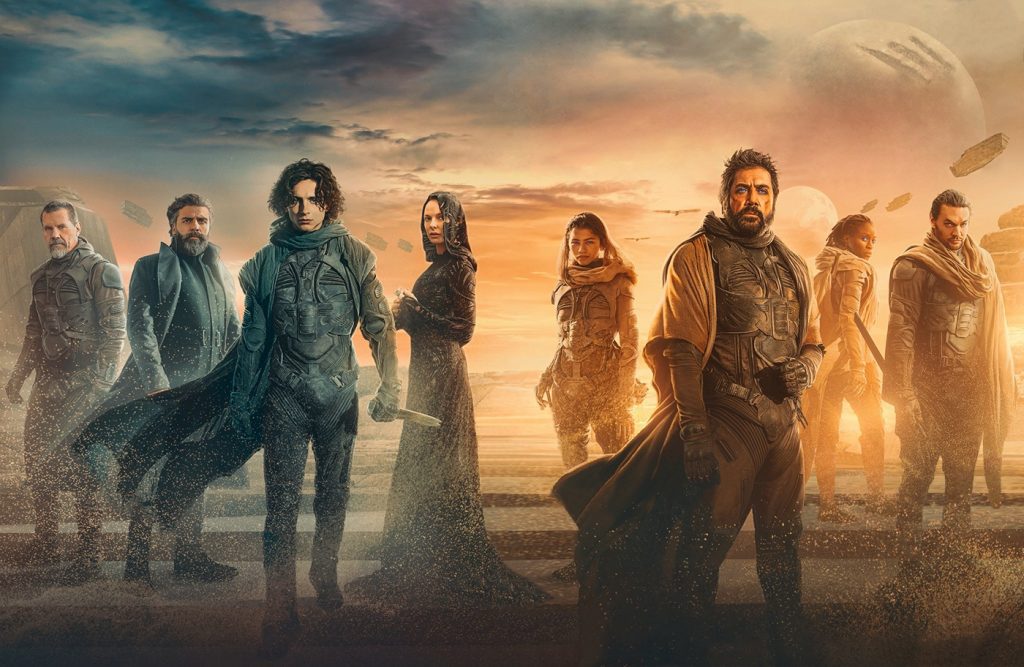 For nearly six decades, Frank Herbert’s “Dune” has remained one of the pillars of science fiction. It had been previously adapted first for film by David Lynch, and then by the SciFi network as a mini-series. The former was a stylistic adaptation with legions of devoted fans (including myself), the series has long been considered a significant challenge for anyone to attempt a better adaptation. After a pandemic delay of more than a year, director/screenwriter Denis Villeneuve has managed to exceed all expectations, but that doesn’t mean it will appeal to all viewers.

It’s interesting to note that of the two most lauded science fiction book series, both deal with a millennium-scale timeline and a galaxies-scale Empire, and have both been seen as nearly impractical to attempt to adapt from page to screen. Both are truly spectacular attempts- Apple TV+’s “Foundation,” and now “Dune“.

The production design and score helps set the tone for a universe with a weight and age to it. Nearly every location and spaceship are designed with the impression of immense scale. The humans inhabiting the world feel so very minor moving within them. It’s a suitable way to reflect the scale of an inhabited galaxy with happenings on a single-world having cascading effects.

The casting [mostly] winds up working really well, with Timothée Chalamet’s Paul Atreides standing out as he carries the storyline on his shoulders. Rebecca Ferguson as Paul’s mother, the Lady Jessica, is the only one that feels amiss from the character. She often winds up being fearful, having to struggle to tap those fears down, while her book’s representation is as a far more stalwart bulwark.

Newcomers to the story may be a bit lost, and need some friends to help explain the various characters and their machinations. Within the novels, there is a great deal of inner dialogue going on, and the earlier adaptations used prolific voiceovers to help fill-in the blanks. In this version, there is none of it. Villeneuve has opted for a more minimalist approach.

The story of “Dune” may not appeal to everyone – it’s part religious crusade, part political intrigue, and part war film, so long on talking and introspection and rather short on action. Consider many classic books, recognized as such and their craft appreciated, but they may not be page burners to a wider audience (“A Tale of Two Cities,” “Dangerous Liaisons,” or “The Great Gatsby”). Even for readers of those works, they will realize at the end there was something deeply special and important that they just read. It might just not be their go-to preference. “Dune” feels like the grand epic in the tradition of “Lawrence of Arabia” and “Cleopatra.”

For most viewers, even if it it feels confusing, and a surprise to find out that this is only the first half of the first book. However by the time the credits roll and the lights come up, they’ll know that they just watched something special.

“Dune” is rated PG-13, and opens in theaters everywhere as well as streaming on HBO Max on October 21st 2021. While you can watch it at home, this is one of those films that is served best by being seen on the largest screen with the best sound system you can find in your area.