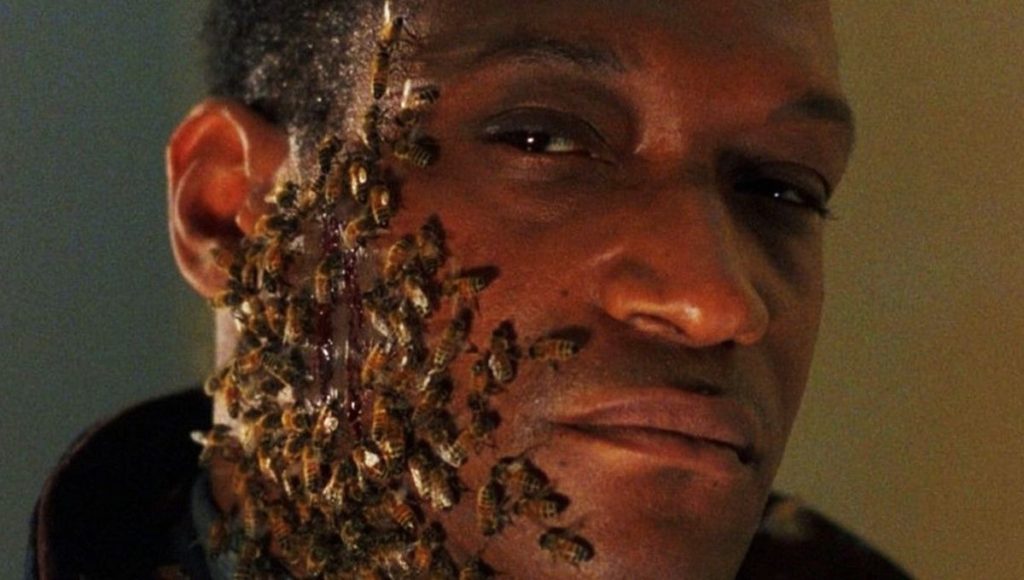 Full disclosure: horror is one of my least favorite genres. Romcoms probably take the number one spot of films I actually enjoy and can be counted on one hand, but horror films simply don’t do much for me. That’s not even to say I don’t like them at all, just that I’m not the filmgoer who spent their adolescence scouring the horror section of Blockbuster seeking out the strangest, bloodiest, low budget gorefests.

This is important to note because you’re probably going to have a knee jerk reaction as to why countless films horror fans love are absent from *my* favorites list. I don’t follow horror directors, I don’t know the obscure creators or special effects artists throughout the decades. And yes, even some of the classics that define the genre are only ok at best to me. I don’t say this to be pejorative to those that DO love these things, just that they are going to be excluded from this horror list by circumstance and preference. I know that I’m a novice when it comes to the genre, and that’s by choice and that’s ok.

Because horror encompasses countless sub genres, sub-sub genres, and even sub-sub-SUB genres, it would be impossible to list the top 5 favorite horror movies. The genre is simply too vast and diverse to do that accurately. So I’m going to limit it to one single sub genre, and one that I actually do have some experience in enjoying. Not expert level, of course, but I’ve seen quite a few to at least make a determination of which ones I like the most. So, here is my list of the top 5 favorite slasher films!

Final Note: This list does include home invasion or torture films, as things like “The Strangers” and the “Saw” franchise, which are kind of sub genres on their own. Sure, they have elements of the slasher flick, but tend to have different themes and premises that don’t qualify as a through and through slasher flick. Ok, enough disclaimers, on with the list!

Can you really have a top 5 favorite slasher flick without including “Scream” on there? I mean, you probably can but I’m sure most people would have a LOT of questions as to why it’s absent. Wes Craven somehow reinvents his own wheel within the slasher genre, redefining an entire era of film and tropes that were consistently copied for decades after. “Scream” really sets itself apart for utilizing all of the classic slasher cliches in new and inventive ways. from the Hitchcock style opening to the in film meta commentary to the reveal that there’s not one but TWO ghost face killers all speak to the perfect balance of familiarity and originality. In addition, “Scream” sports some fantastically sharp writing (that opening banter between Drew Barrymore and Ghost Face is absolutely brilliant even on paper) and some of best overacting from Matthew Llliard and Skeet Ulrich. That’s not slander either; they’re absolutely fucking genius in their performances, and their reveal and banter back and forth is simply wonderful. “Scream” is a staple of my Halloween viewing rotation, and I watch it every year now.

No, not the recent remake. I’m talking about the original 1992 “Candyman,“ the one that put Tony Todd on the iconic horror map forever. Though perhaps more of a psychological thriller/supernatural horror flick (with elements of romance?), I would still consider the original a slasher film at heart. It has all the beats of a classic- unkillable entity hunting down unsuspecting offenders and murdering them in horrific fashion, but it is also elevated by its incredibly sharp social commentary. “Candyman” disguises complex social issues underneath the veneer of a classic supernatural slasher flick. It’s so much smarter than people think, and despite less than stellar sequels, the original film still holds up to this day. It is rare that a slasher film is this clever, and that sets “Candyman” apart from the rest of peers. I hadn’t seen it sometime, but rewatched it again in preparation for the new 2021 remake/sequel (review here) and was pleasantly surprised at how well it has stood the test of time.

Before you crack your knuckles in preparation for a full on assault in the comments, hear me out. First, you need to know I’m a sucker for meta narratives, especially within the horror genre. “Freddy vs. Jason” is by no means a good movie, but it’s damn good fun and a really solid way to bring two iconic slasher icons together in one film. Packed with great kills and constant self referential quips, the film really does a great job in pitting these two together in a showdown. “Freddy vs. Jason” is silly and downright dumb, but it’s also good fun at just about every turn and never takes itself too seriously. It knows exactly what it is, why it exists and delivers on just about everything it sets out to do. “Freddy vs. Jason” may not be a good movie, but it is one of my favorites of the many, many, MANY films in the Freddy and Jason canons. If for nothing else, it doesn’t have a dude on a rooftop trying to take down Jason with nothing more than a jab and right cross.

Perhaps one of the most surprisingly enjoyable films on the list, “You’re Next” is one of those rare horror films that garnered critical acclaim as well as audience buzz. Critics tend to be significantly harsher to horror films in any sub genre, but “You’re Next” is elevated by a sharp script and playful approaches to common horror tropes. It’s another meta narrative that knows exactly what it’s doing, and actually starts out as a home invasion type flick and quickly transforms itself into a slasher film. The masks are cool, the story and characters are weird and eccentric, and the tropes are anything but typical. “You’re Next” plays with the final girl trope pretty well, and manages to offer some surprises in a typically tired genre. If you haven’t seen this film, I highly recommend it. It’s one of the few slasher/horror films I actually own and have no problem throwing it on when I want a good old fashioned but fresh slasher flick.

Who would’ve thought that blending “Groundhog Day” with a masked killer would go so well? “Happy Death Day” is another sleeper hit for me, one that I had no desire to see but ended up being so thankful that I did. Jessica Rothe is nothing short of brilliant here, too. Carrying the film on her shoulders and elevates the already strong and unique premise to a whole new level. Fun fact: I actually saw the sequel “Happy Death Day 2U” before I saw the original, and while it isn’t as strong as its predecessor, it was good enough to make me go back and watch the first one. I was not disappointed. Seriously, this is just a damn good time at the movies. “Happy Death Day” is really fun, and of course it’s a little meta but that makes it all the more interesting for me.