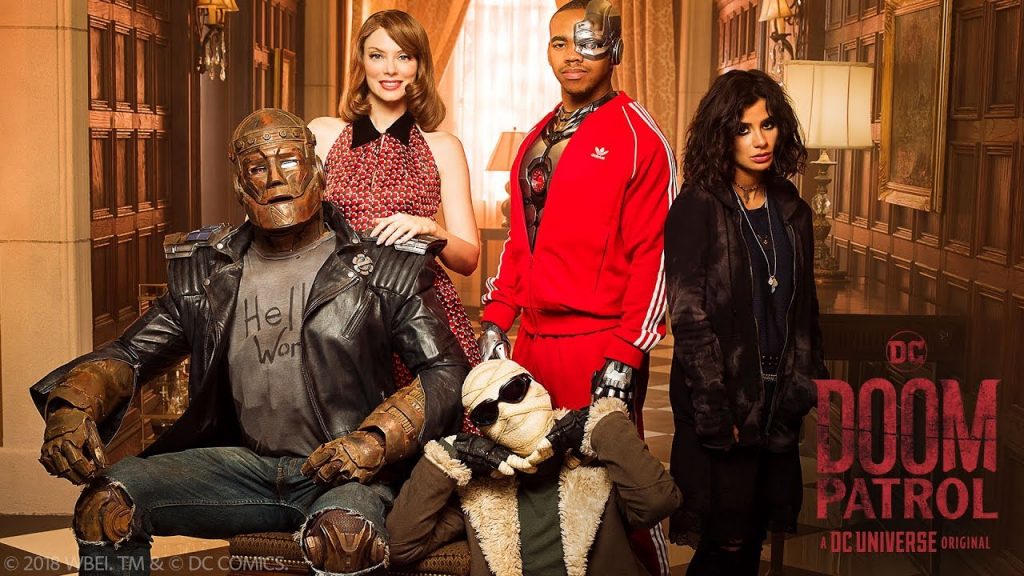 “Doom Patrol” is the Most Bizarre DC Has to Offer, and it Works?? [Review]

There’s abstract and absurd, and then there’s “Doom Patrol.” There aren’t enough words to describe the ride the DC series sends you on. I can’t even tell you to strap in, because halfway through the first season whatever restraints you’ve imagined aren’t enough. And yet, perhaps the strangest thing about “Doom Patrol” is that it all works. It turn it creates a can’t look away, edge of your seat experience packed humor, action, f bombs, and heart. On paper, there is simply no logical reason this series should be watchable for more than 15 minutes. But much like our ragtag group of failed super experiments, 24 episodes of it still isn’t enough. It manages to do the impossible- blending outrageous characters and story with humor and heart.

Developed for television by Jeremy Carver and based on the DC Comic series of the same name, “Doom Patrol” follows a group of unlikely heroes who have all received powers through tragic means. Considered outcasts by society and all-star superheroes alike, the group live together in a giant mansion under the supervision of the chief, the would be leader and father figure. Throughout the series, each member is forced to confront their own personal demons (and some real ones) while also learning to live with their abilities. And, much like every superhero team up, they must all come together to fight evil and save the world.

In its most basic form, “Doom Patrol” is a pretty straight forward tale of unwilling protagonists desperately trying navigate in a world they don’t understand with powers none of them really want. They have their own self discovery, as well as their own “let’s all work together team” moments that you would expect from any superhero tale. But that’s about where the similarities stop.

I can’t stress this enough- it is outright bizarre and nothing can prepare you for how weird it gets. Whenever you think you’ve got a handle on things, it throws another curveball at you that you’re forced to try and wrap your mind around. Surprising just about anyone (myself included), the show manages to pull it off in a way that makes it one of the most binge worthy shows available. It’s hard to explain why it works because it has everything working against it, but somehow this show makes it happen.

Part of the shows success perhaps lies in its sustained absurdity. Rather than try to ground it in some kind of reality or attempt to dumb it down, “Doom Patrol” ops for full on assault mode. In the first season alone, we are introduced to a villain who can fourth wall break and narrate our heroes stories both in the show and the comic simultaneously, an interdimensional portal inside a donkey, a talking religious zealot cockroach, a sentient gender neutral teleporting street, a nazi scientist puppet show, a snow globe who’s cult like inhabitants attempt to bring about the end of the world, and of course, a man who’s part tree and part raptor head. And that’s just the first 6 episodes.

If it all sounds like too much, it is. And you’d be forgiven for not wanting to know more. But underneath the sex demons, SeX Men (another bureau for, you guessed it, sex), and scants (don’t ask) is a heart powered by its outstanding performances. The entire cast of the actual Doom Patrol are what give the show a consumable pace. They provide viewers with tragic, broken people we can’t help but root for. While everyone deserves their moment in the spotlight (you can’t go wrong with Alan Tudyk) as there really isn’t a bad performance here, the true standouts are Diane Guerrero as Crazy Jane and Brendan Fraser as Robotman.

Guerrero portrays a traumatized girl with multiple personalities (64 to be exact) each with their own distinct characteristics and superpowers. The ease in which Guerrero goes from Baby Doll (a personality of a very young, naive child) to Hammerhead (a takes nothing from no one hothead) to Penny Farthing (a young British girl with a stutter) is absolutely incredible. She seamlessly transitions from personality to personality, never losing site of Jane (her more levelheaded primary) nor feeling as if she’s only slightly different. They are all distinct, and Guerrero proves her chops. Likewise, Fraser returning to the screen is welcomed for anyone who is a fan or knows the personal tragedies he experienced in his later years. Fraser is downright hilarious in his delivery and presence, which is even more amazing considering his physical form is a giant metal robot head that never changes its expression. Because of this, Fraser never gets to physically emote with his face, relying solely on body language and voiceover delivery. Fraser is so good with both, somehow pulling every emotion from an unchanging robot face.

Lastly, for all of its love of the bizarre and outrageous, “Doom Patrol” tackles trauma with care and sensitivity without ever shying away from consequences or the more disturbing aspects of it. Whether its Negative Man (a brilliant Matt Bomer) struggling with his own sexuality or Rita Farr (a delightful April Bowlby) wrestling with her mother’s taboo acts to get her young daughter into Hollywood, this is where the show becomes much more grounded. It is perhaps in this anchor of self discovery, truth and consequences that provide the balance the show needs to stand out and bring some order to the chaos. Make no mistake, the show is still chaotic as hell, but if you start to peel back some of layers, you’ll discover a purpose.

This is bizarre done right. It presses on the gas and rather slow down to give you time to breath, it floors it. The show pushes the limits of what a viewer can handle episode after episode. But by doing this, it becomes easier to sit back and enjoy the ride. Once you accept the absurdity, the show rewards you with a very human look at superheroes marred by the tragedies of their past. This harmony between the outrageous and exploration of the human condition makes “Doom Patrol” something truly special. Add to that its powerhouse performances, and you have one of the best shows DC has to offer.

Seasons 1 and 2 are currently streaming on HBO Max.