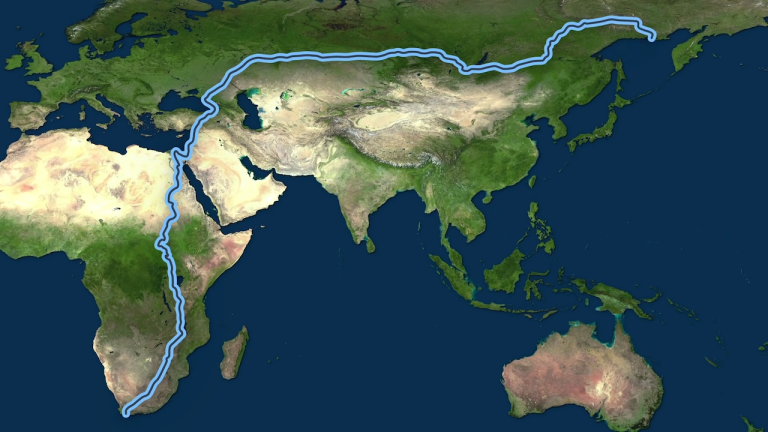 Longest Walkable Distance On Earth Has Been Calculated

If you’ve ever really wanted to take a journey and be gone for over three years while you trekked accross the world, the longest walkable distance has finally been calculated. To the knowledge of Joseph Pisenti who was able to figure it out this trail has never been completed. By anyone. That could be for various reasons including having to cross borders and weather issues that would more than certainly effect your health and impact what you had to carry to survive.

Russian winters if you were there at the wrong time are lethal. And if you don’t have the supplies you need to survive then you can pretty much count on perishing, unless some nice people were to take you under your wing. Plus the route takes you through desert which could be unpleasant should you not know how to keep cool. In fact the route is sprinkled with extreme weather conditions throughout the way.

The path starts in L’Agulhas, South Africa and finishes in Magadan, Russia. It would be a great accomplishment and no doubt get someone entered in the Guinness Book of World Records for many years to come. That is until someone else finds an even longer walkable distance.

What makes this the longest walkable distance?

Well while calculating the route there were some rules that Joseph had in place. First there had to be no bodies of water you had to cross. Because taking a boat would be cheating. No shortcuts! Second you had to be able to calculate it using Google Maps. It had to be mappable and safe(ish). The route from L’Agulhas, South Africa to Magadan, Russia measures 23,068 kilometers and has elevation changes of 123,000 meters. Which yes you must be very careful while changing altitudes, so on those parts of the journey you will have to stop a few days at a time to get used to the elevation or you could get sick and die.

Nobody in history has ever before managed to complete this real-life achievement. People have already climbed the tallest mountain, sunk to the deepest part of the ocean and even landed on the moon, but nobody has ever accomplished the longest possible walk. So what would it actually be like for you if you decided to become the first. Here is a brief overview of both the horrible and amazing things that you would end up experiencing.

Considerations To Make Before Buying a Commercial Property in Istanbul