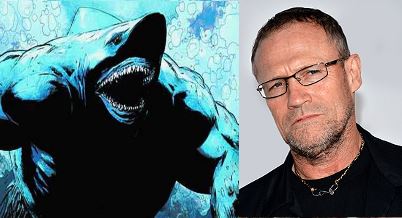 Casting for James Gunn’s Suicide Squad 2 has been pretty active recently, and the latest news is that Michael Rooker is in talks to take on the role of King Shark. Rooker and Gunn have worked together before, most notably in the Guardians of the Galaxy franchise in which Rooker starred as Yondu Udonta in both films. This news was reported by the Wrap but has not been confirmed by Warner Bros.

King Shark was first introduced in the Superboy comics in 1994. Nanaue or King Shark is a humanoid shark who is the son of “The King of All Sharks” or the Shark God. He has been a member of the Secret Six, the Secret Society of Super-Villains, and the Suicide Squad. King Shark has also appeared in the TV show The Flash where he was played by Dan Payne. In the TV show, he was a marine biologist from an alternate Earth who was mutated by a particle accelerator.

Other casting rumors for Suicide Squad 2 include Daniela Melchior as Ratcatcher, Ant-Man‘s David Dastmalchian as Polka-Dot Man, Guardians of the Galaxy alum David Bautista possibly as Peacemaker, John Cena in an as yet unknown role, and Idris Elba, who was originally thought to replace Will Smith as Deadshot but now will have some other role, possibly the de facto leader.

Margot Robbie (Harley Quinn) and Jai Courtney (Captain Boomerang) are returning and it is believed that Viola Davis (Amanda Waller) will also return.