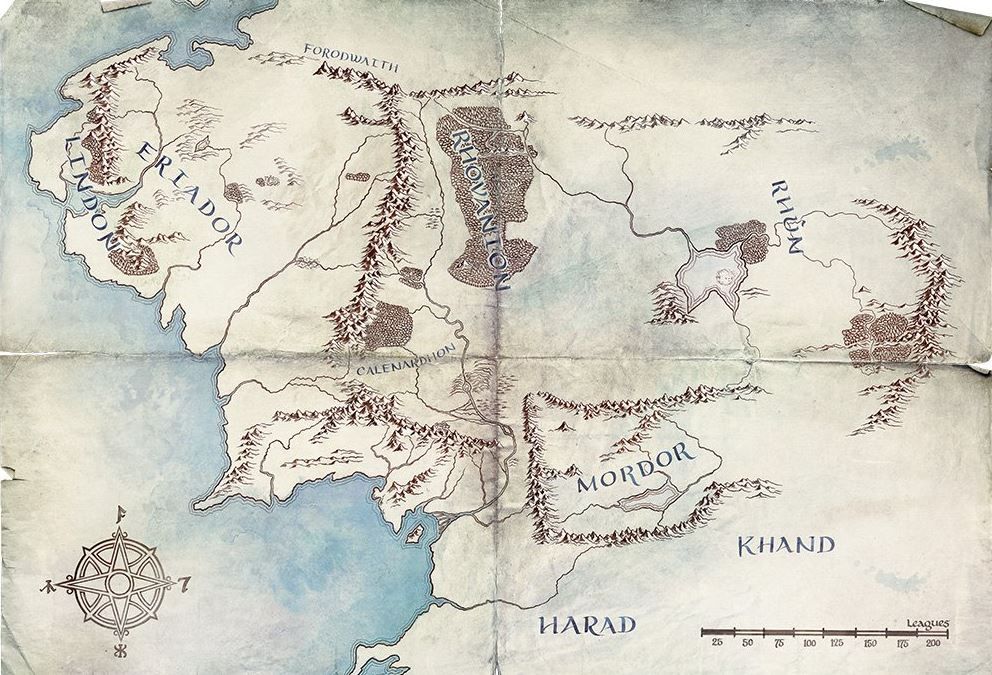 Since the announcement of Amazon’s Lord of the Rings TV series, fans have been speculating if the show would be a follow up or side story to accompany Peter Jackson’s epic movies. Now we have some breadcrumbs thanks to the shows official twitter feed which has spent the past week trickling out clues about what it will actually be about. Last Friday, the feed posted a map of middle-earth with all of the names removed. Today saw an updated version of that map with the names added as well as a larger version that could be pored over.

Die hard fans recognized that the map does not represent the map of middle-earth that most people are familiar with. The main trilogy of books took place during the Third Age which began after Sauron was first defeated and the One Ring was lost. However, this map features names and places that only existed during the Second Age which was several thousand years before Frodo and the gang showed up. The biggest clue came in the form of the map showing the name “Calenardhon,” which was an archaic name for what would eventually become the Kingdom of Rohan. Other familiar locations such as Gondor are not present at all since they were not established until after Sauron was defeated.

This kind of marketing seems to accomplish two things for people who might be anxious about whether and LOTR show could work. It shows off that the people who are working on the show are not afraid to go into the deeper lore of the world and give hints that only Tolkien scholars might know. And it also gives a clue that this show is going to tell its own story and will not necessarily be tied to the stuff that everyone already knows. While the history of the Middle-Earth is well documented in multiple books, there are enough gaps to carve out something that would feel familiar and different.The main thing in their favor is that for much of the LOTR lore, most of that only exists in notes or the stuff that was compiled posthumously by JRR Tolkien’s family. That leaves plenty of stories that could be created that would not interfere with the history that is already out there. On the other hand, it is always a risk to create something that was created by someone who cannot approve of the work being done.

It is one thing when an author like George R.R. Martin approves of a Game of Thrones prequel because he is still alive to see the pitch and approve of what the producers want to do. We have seen with other series like Dune what happens when that author is not around to oversee what future authors do with their toys. The numerous Dune prequels and sequels contained stuff that was in Frank Herbert’s notes but was not in his authorial voice, which made the whole affair feel like fan fiction. It’s a tightrope walk that is practically guaranteed to piss off some group of fans and can never truly make everyone happy. Especially with a series as beloved as Lord of the Rings which has been in the culture for over 60 years. The series as a whole is pretty much the bedrock of every piece of high fantasy that has been released since, which is a lot to live up to. Thankfully, all the producers have to do is make something better than those Hobbit movies, so at least they have a lower hurdle to cross.

Are you excited for the Lord of the Rings Prequel series? Tell us in the comments!