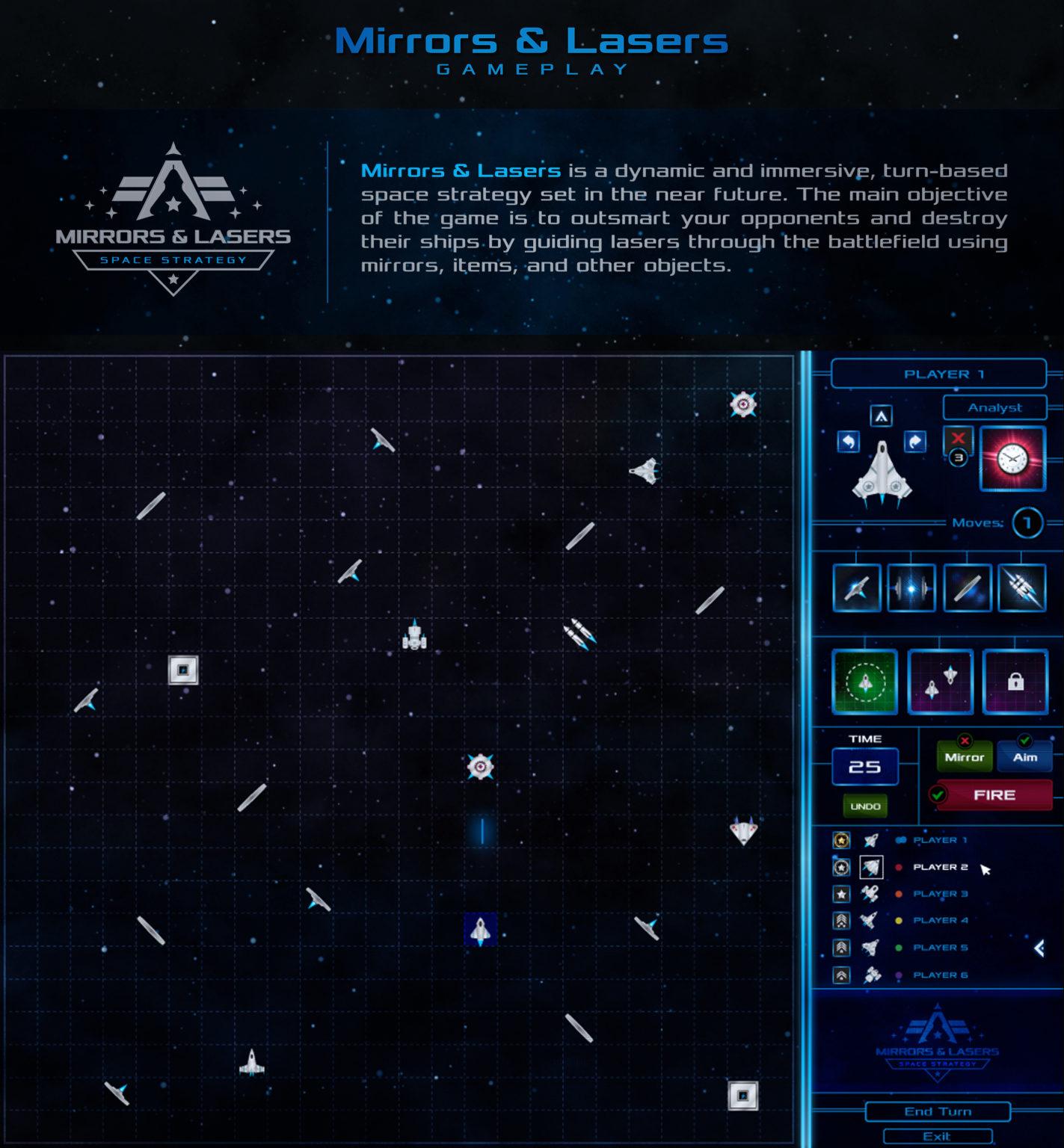 Mirrors & Lasers is an indie 2d strategy video game developed by Mickaël Bergeron Néron and Milan Andjelkovic. Set in space in the future, two or more players must, turn by turn, use mirrors, items, and augmentations to direct lasers and hit the enemy ships.
Gaming

There’s a game my brother and I used to play with pens and paper. We’d call it “Mirrors and Lasers”. It basically played like this (I recommend watching the video below for a visual explanation, or you can keep reading):

On a grid, two players each have a laser-shooting spaceship. Turn by turn, players can either place one diagonal mirror (which can deflect lasers) or move their ship by one tile in any direction. The goal: to place mirrors or move your ship in a way such that a laser starting from your own ship hits the other ship.

It’s simple enough, but challenging, and we had a lot of fun playing this together or each with our own group of friends at school during recess. We even had some variations with walls, bombs, and being able to shoot a laser from the other ship to ante things up.

But, unless you’re playing DnD, pen and paper games have their limitations…

That’s why, with the conviction that Mirrors & Lasers should be adapted to a video game, I teamed up with a graphic designer, and together we made a video game version of it.

We added a ton of elements, added augmentations (single-use powers), items, and countdown-based special abilities. We made a single player campaign mode as well as a multiplayer skirmish mode. We added random passing asteroids that destroy everything in their path, added cargo-containing “spacedrops” that randomly appear on the battlefield and which you definitely should collect before your enemies do, added the ability to play up to six players in a match, and much more.

We added a lot, but we have some limitations. While my friend knows graphic design and I know programming, neither of us knows sound production, soundtrack composition, and marketing…

And that’s why we are now launching a Kickstarter.

The Kickstarter will run from August 13th to September 11th and will help finance the final stage of the game. The money collected will help pay freelancers for sounds, music, marketing, and translation to four additional languages, in addition to paying for our own efforts, considering that we are now both working part time to finish this game.

Additionally, if we’re able to reach our final milestone of C$ 75000, we’ll develop a mobile version of the game in addition to adding content to the current version of the game, such as new achievements and maps, an aiming system (a system to help visualize the path a laser will take), and even organizing online tournaments to find out who’s really the best Mirrors & Lasers strategist in the galaxy!

As is customary, we offer rewards for different pledge levels. For 5$, you get featured in the credits and receive a digital Thank You certificate signed by us. For 10$, you’ll also get a copy of the game on Steam when it comes out. For 25$, you’ll also become a beta tester of the game, and thus be able to provide valuable feedback while we finish the game… We have tiers for 50$, 100$, and even 250$ for our highest rewards. You can visit our Kickstarter page to see the reward tiers.

You can also join our Discord server to follow development of the game.

If you are interested in this project, please share abundantly, as this will greatly help us reach our funding goals and make Mirrors & Lasers, the video game version, a reality.

Ultimately, this is a project I hold close to heart, having played it a lot with my brother and my friends with pens and paper during childhood, and I’m incredibly happy to have reached a point where the game will soon be ready for the world to enjoy, and for you to play.

You may follow our Kickstarter or watch the video above to see a trailer of the current state of the game.

Thank you for reading, and we hope to see you in Mirrors and Lasers.

Author Bio: Mickaël Bergeron Néron is the lead game developer at Quavelty Games and Octopus Games, two small game studios based in Montreal, Canada which are comprised of video games enthusiasts who work on hobby video game projects in their part time.