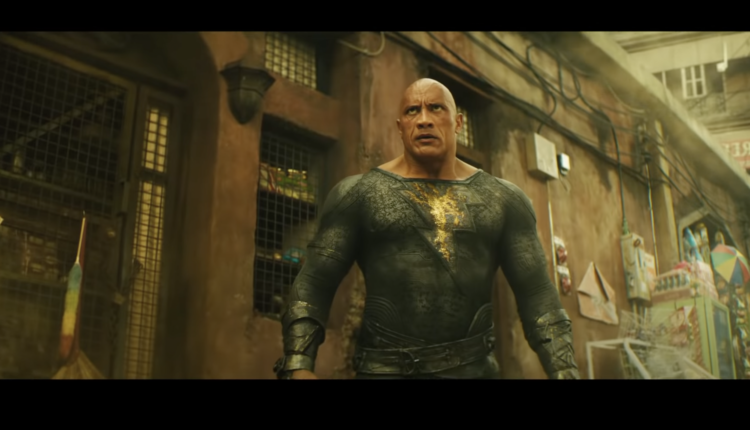 Just a few weeks ago, Warner Bros. Pictures put out a teaser for their slate of upcoming DC Comics movies. The video loudly booms how “in 2022, the world needs heroes” with footage of “The Batman,” ‘”Black Adam,” “The Flash” and “Aquaman and the Lost Kingdom.” The teaser even played at my showing of “The Batman” just last week to build momentum from what is looking to be a colossal hit and return to form for the brand.

Well, it looks like two out of their four superhero marquee titles aren’t going to be released in 2022 after all. Today, WB announced a series of release date shifts for almost every upcoming major release, with some being pushed, and a couple actually coming out sooner.

The first news hit via Dwayne “The Rock” Johnson‘s Instagram, where he put all his natural charm on display to sugarcoat the fact that “Black Adam” has been moved from July 29th to October 21st. As a sort of consolation prize, he said that the animated “DC League of Super-Pets,” which features Johnson’s voice as Krypto the Superdog, will be released on July 29th instead.

This will be the third time “Black Adam” has been moved, having already been set to come out last December, meaning that it should largely be done by now. My best guess is that they hope “League of Super-Pets” can coast off being Batman-adjacent, and enjoy some family goodwill for kids that might not have been able to see “The Batman.” It also gives “Black Adam” more of a chance to build up hype and use October as a platform to sell a darker movie about an anti-hero.

Another possible reason why “Black Adam” is being pushed is to put it closer to a movie being released earlier. “Shazam! Fury of the Gods” is being moved up from June 2023 to December 16th 2022! Putting two related characters closer together makes sense, since Black Adam is a villain for Billy Batson. This is also a gamble however, as this is the same day that James Cameron‘s “Avatar 2” is supposed to release. Taking on the sequel to the highest grossing movie of all time (yes it still beats “Avengers Endgame“) is a gigantic risk. The plan is probably to bank on the fact that “Shazam 2″ isn’t nearly as expensive to make, and has more relevance for younger audiences than a movie whose last entry came out over 12 years ago.

“Shazam! Fury of the Gods” actually replaces the release date of what was initially going to battle “Avatar 2.” “Aquaman and the Lost Kingdom” goes from December of 2022 to March 17th, 2023. Given how expensive that film must be, its probably better to give that movie some breathing room and not have to compete with another film all about underwater shenanigans.

Another casualty was “The Flash,” which has been moved from 2022 all the way to June 23rd, 2023. This one is another head scratcher for a couple reasons, because it has Batman, in the form of fan favorite Michael Keaton. A lot of recent promo material has also been focused on how this movie opens up the foundering DCEU, which could launch all kinds of crazy cross overs in the future. My non-educated guess is that keeping a version of Flash from the ill-fated “Batman v Superman,” “Justice League” in play means that WB isn’t 100% done with that world just yet. If “Spider-Man: No Way Home” can make people like Andrew Garfield again, who knows what could happen in bringing back Henry Cavill or other elements of the Snyderverse back (probably not Ray Fisher sadly).

That’s not to say that 2022 is going to be without a bevy of big DC Comics movies. “Batgirl” is still coming to HBO Max later this year.

Honestly, it sounds like “The Batman” might have changed a lot of decisions about how to handle DC properties going forward. As popular as the film is right now, a nearly 3 hour crime drama that only has a couple action scenes and almost none of the tropes of most popular superhero movies is not really a sure thing. “The Batman’s” unmitigated success means that WB can breathe a little easier and not have to be in the mindset of throwing everything at the wall and seeing what sticks. Hopefully, they can take the goodwill from Matt Reeves’ Dark Knight film and use it to their advantage to make their movies the best they can be.