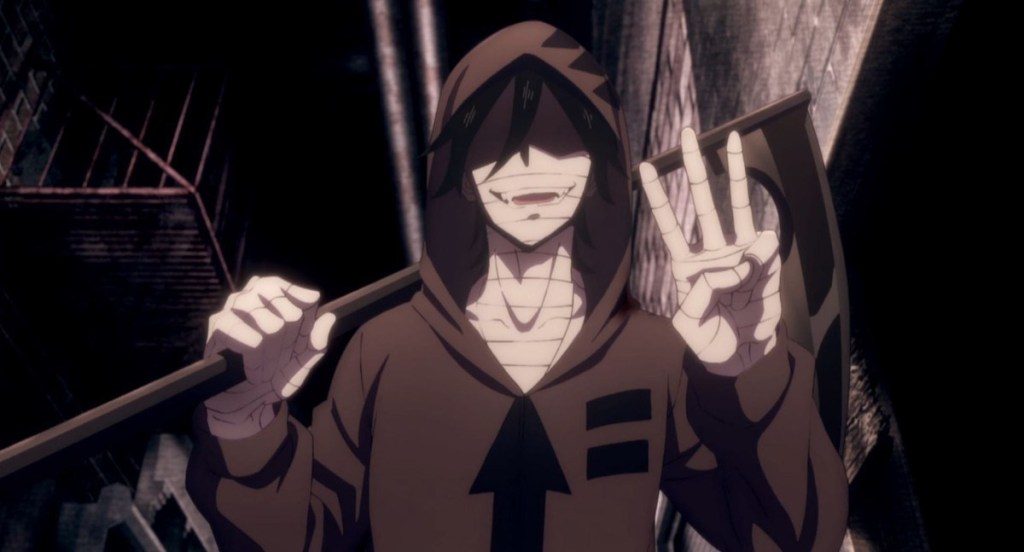 Have you ever wanted to talk to someone after finishing an amazing anime, only to find that absolutely no one else watched it and no one wants to talk about it? Well, you’re in good company because this happens to me constantly. These are my top ten criminally underrated anime. Emphasis on the MY part, because everyone has their own tastes and opinions and what tickles my pickle may not necessarily tickle yours. Anyway, onward, to the anime!

Now, I know what you’re about to say. This anime sucked. But, did it really? I actually really loved this anime. Partially because I’m a massive Kaishaku fan, partially because of Chikane and Himeko from Kannazuki no Miko, and partially because I like good ol’ fashioned romance. Shattered Angels, or Kyoshiro to Towa no Sora is about Kuu, who feels empty. Every day she writes a letter to a prince she met as a small child, telling him about her day. Then one day, a new student is introduced to her class, and he looks just like her prince! Ok, yes it’s predictable, and a little weird with the angels and robots and whatnot, but it has some really beautiful moments, stunning animation, and an ending that will make you weep.

This show is so damn fun. I watched this during a time when I had anxiety about starting new shows, but I just had a feeling about it, and I’m so glad I gave it a shot. Riddlestory of Devil, or Akuma no Riddle, is about Tokaku Azuma, who comes from a family of legendary assassins. She has entered a class full of other assassins and their main objective is to destroy one girl in the class, Haru Ichinose. And here’s the most beautifully predictable twist. Tokaku falls in love with Haru, and switches sides, becoming her protector. So in each episode, we see how Tokaku and Haru thwart each of the other students’ attempts. It’s fun. It really doesn’t try to take itself too seriously. Each of the other girls have amazing, fleshed out backstories, the animation is nice, and it keeps you wondering what’s going to happen next.

Uta Kata was one of the very first “dark magical girl” series. It was Madoka Magica before Madoka ever got to Magica. Uta Kata is about a girl named Ichika Tachibana, who loses her cellphone charm to a mirror at school the day before summer vacation. A strange girl with green hair named Manatsu emerges from the mirror to return the charm, which is now different colors than it was before it got lost, in exchange for a favor. Ichika accepts and is magically transformed into a real magical girl. Soon, though, Ichika realizes that her new powers come at a price, as she eventually starts to become weak and falls ill. Uta Kata seems like it’s going to be a fun anime about summer fun, friends, and magical girl adventures, but it quickly turns dark, tackling subjects such as abuse, eating disorders, and suicide. I definitely think that makes Uta Kata worthy of checking out, just because it is so different from what you initially expect.

Kobato is so stinking beautiful. Like, insanely beautiful. I remember the first time I watched it, just being amazing by the beautiful animation and the colors and the tranquil atmosphere of the show. I highly recommend it to anyone that suffers from anxiety. Kobato is a CLAMP series about a super sweet and cute girl named Kobato. Kobato has a contract that says in order for her to be able to go to “a certain place” she has to fill a bottle with people’s healed hearts. So, she goes around doing good deeds, while being yelled at by a plushie dog that she keeps with her. Kobato, like every other CLAMP series, has crossover characters from other CLAMP series. And it’s so damn tranquil and nice. It really doesn’t get the amount of praise it deserves.

Ok, yes, Venus Versus Virus is a little cliche, but I love it! Venus Versus Virus is about two girls who can see and fight off demons called Viruses. It’s got kind of a gothic feel to it and one of the girls, the stoic Lucia, may or may not have feelings for the basic Sumire. It’s got action, queer baiting, a gothic aesthetic, and a girl with an eyepatch, so that makes it a winner in my books!

Let me get something perfectly straight. I have never been scared by a horror anime. Until I saw Ghost Hunt. This series has several arcs within it that cover the various cases that these ghost hunters/exorcists go on and they range from your basic, “this building isn’t haunted, it’s literally got loose floorboards” to “THERE’S AN ACTUAL DAMN VAMPIRE CREATURE IN THIS DAMN LABYRINTHINE HOUSE”. Don’t say I didn’t warn you.

Genshiken actually did experience a small explosion in popularity, but mostly in Japan. Genshiken is about a boy named Kanji Sasahara, who just goes by his last name, who is hung up on whether or not he should join a specific college club, the society for the study of modern visual culture, or Genshiken. The Genshiken club is a very small, close knit club of otaku friends Madarame, Kousaka, Tanaka, and Kugayama. Throughout the series more members join and we get to see their misadventures in visiting Akihabara and going to anime conventions. Also, just saying, season one is worlds better than season two.

Angels of Death is the most recent title on this list, having just come out last year. It was based off a Steam game and it certainly retains a lot of its video game-like qualities. It reminds us of some of the gry hazardowe za darmo automaty (Gambling games you can play for free.) The story takes place in a large, multi level building, where 13 year old Rachel “Ray” Gardner finds herself, with no memory of how she got there. She is in what appears to be a hospital, until she takes an elevator one level lower to find herself on what appears to be an empty city street. This is where she meets Zack, a crazed serial killer who chases her back to the elevator. The series plays out like a survival video game, and each floor of the building has a master and various traps that they control. The animation is stunning, the characters are compelling, and the story will keep you on the edge of your seat.

Oh. My. God. THIS SERIES! Why is no one watching this series?! Shigofumi is about Fumika a girl who delivers letters from the dead, called shigofumi, to the living. It’s kind of like Hell Girl in the way that you get a different story with every episode, about a different dead character, but there’s also an over arching story about Fumika and her origins. The story is incredibly deep and beautiful and covers human relationships, grief, abuse, and many other complex issues. Bring tissues for this one, because it is most definitely a feels trip.

Haibane Renmei was created by the same folks who created Serial Experiments Lain, but never enjoyed the same amount of success, for some insane reason. It has the most beautiful story and calming atmosphere of any anime I’ve ever watched. Haibane Renmei is about Rakka, a girl who was just born, fully grown in a teenage body, into a strange world with humans and winged people called the Haibane. In this world, only specific, masked folk are appointed to leave the town, Haibane are expected to work for their belongings, and they are stationed at different, previously abandoned, buildings around the town. The Haibane all live in harmony with the humans and eagerly await their “day of flight” where they supposedly cross over into another life. Every single thing about this series is endearing and amazing. It’s also quite sad, though, so be prepared to cry.

That’s my top 10 criminally underrated anime! I hope you were able to add at least a few titles to your watchlist and that you enjoy!