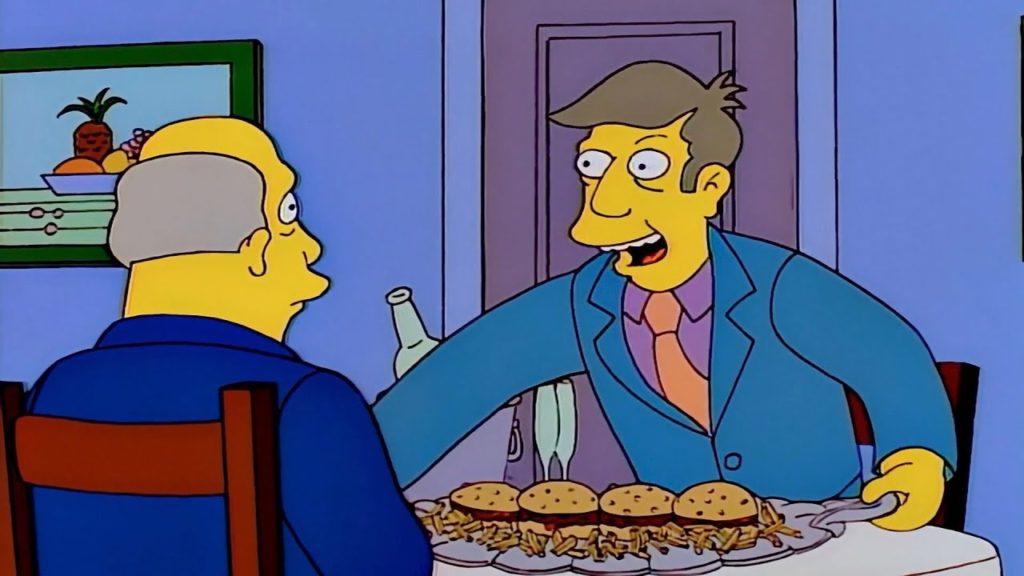 The Ultimate YouTube Playlist for Steamed Hams Has Been Unearthed

If you are like any other living breathing person odds are you have seen or at least heard of the Simpsons. One of the best scenes from the shows golden age (Seasons 3-9 Forever!) is the episode 22 Short Stories about Springfield.

In this season Seven Segment you are able to watch as Principal Skinner invites Superintendent Chalmers over for an unforgetttable Luncheon. When it all goes awry however, Skinner finds himself in a pickle where he now has to lie away the fact that he one, wasn’t making steamed clams after all, and two, there is a raging fire in his kitchen. Here is the original clip for your enjoyment.

Now the Steamed Hams meme has been going around for a couple years now and has had its waves of popularity. However I think it is important to recognize the weight and breadth that creativity that has built up over 2 minutes of animation. Seeing people remix and twist this now 23 year old clip is insane. On YouTube you can find play lists with over 100 different versions of the thing.

If you don’t personally feel like going down that well of madness then here are a couple of personal favorites.

Being a child of the 90’s, this recent video that adds “Basket Case” to steamed hams felt like a love letter to that missed decade.

This compilation of animators doing their own spin is a great intro to how versatile the clip is in inspiring creativity. Everyone brings their own special brand of insanity into the mix.

This one is fun cause it comes from someone who has never seen the show and just improvs off the animation itself. It is goofy but I like how it highlights that there are people besides hardcore Simpsons nerds that can add their spin.

This playlist goes on for almost two hundred videos and I admittedly lost a good part of the day flipping through the hilarious edits of my beloved show. So if you need something to do why not check it out? Put it on for your Simpson’s loving friends, have a beer and then put on some simpsonwave to continue the fun.

What is your favorite clip from the Simpsons? Tell us in the comments!