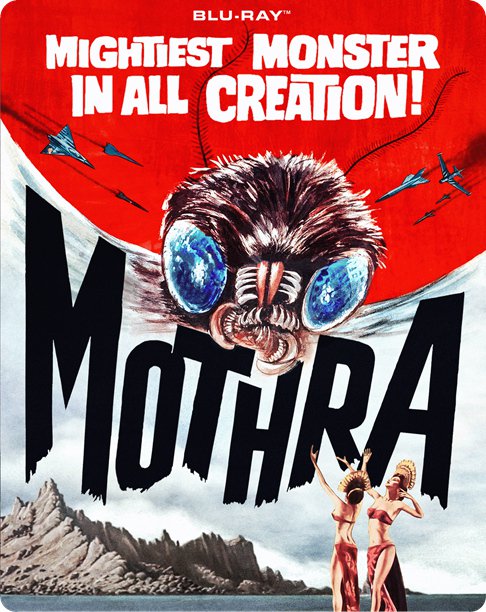 Godzilla: King of the Monsters is coming out on May 31. In the film, Godzilla will face off against other legendary monsters Rodan, Mothra, and King Gidorah before he battles King Kong in Godzilla vs Kong in 2020. Trailers for King of the Monsters look pretty awesome with all of our Kaiju being dramatically and beautifully realized.

If you want more monsters before the debut of Godzilla vs Kong you are in luck! Mill Creek Entertainment will be releasing Mothra (1961) in North America on Blu-Ray in a Steelbook special edition. This will give new viewers a chance to familiarize themselves with the history of what is, in my opinion, the prettiest monster.

Mothra was created by the same team responsible for the original Godzilla. Mothra went on to appear in 14 films as either her caterpillar or her moth form or both and was Toho’s second most popular kaiju following Godzilla. She is often portrayed as a heroic character, the protector of the natives of Infant Island. She is usually accompanied by two tiny twin fairies or “shobijin” who can speak for her and act as her priestesses. It was to rescue the twin fairies that she came to Japan from her island in her first movie, where she wreaked havoc until the two fairies were returned home.

The Steelbook release will include:

If Godzilla does end up as King of the monsters on May 31, Mothra may well be considered their Queen.