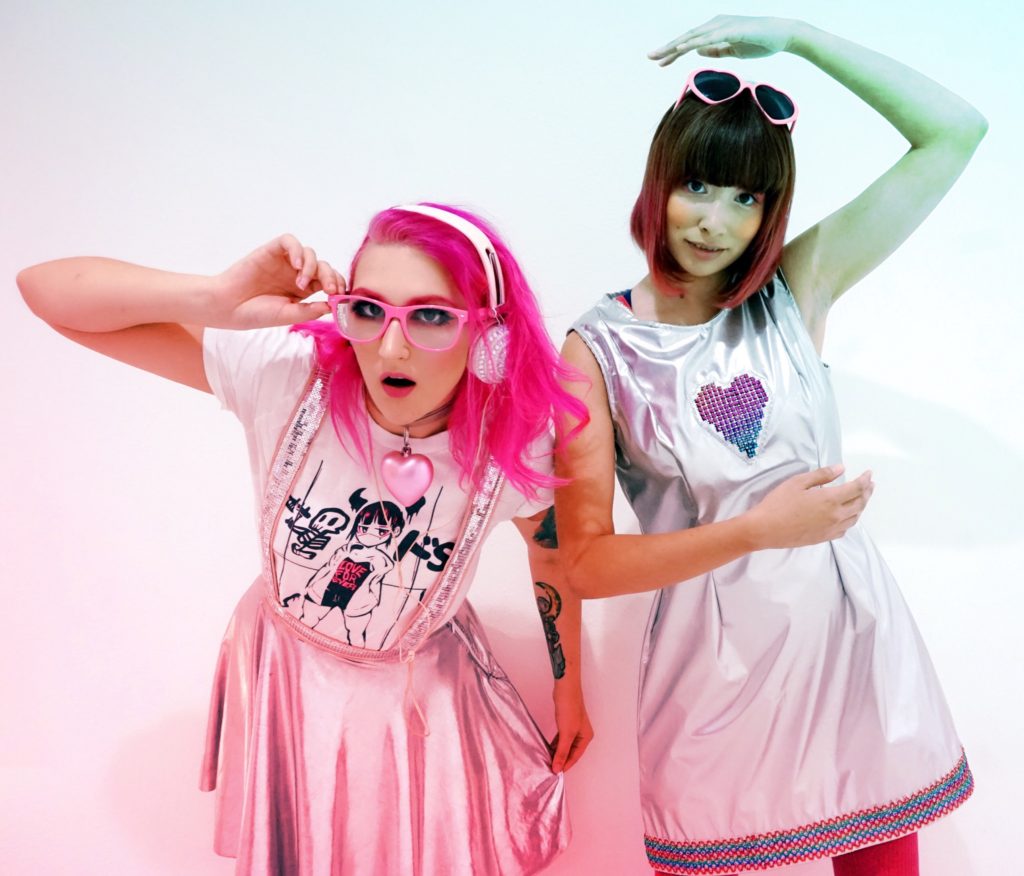 If you’re anywhere near the Los Angeles music/anime/or fandom scene, then you’ve seen both Plasmic and Stephanie Yanez before. As if these two musical acts weren’t stand-out incredible on their own, they’ve combined forces to create a new band call Cali Crisis. Their debut single is a cover of the song ‘Angel of Love’ from the anime movie Perfect Blue, which just turned twenty years old. Today, we’re getting the chance to pick these ladies’ brains and learn all about where we can find more of their amazing anime inspired music and aesthetic!

Hi ladies! Thank you for giving Nerdbot this interview. Can you tell me off the bat, how did you two come up with the name Cali Crisis? What was the decision to have ‘Angel of Love’ from Perfect Blue be your debut single?

Plasmic: Stephanie came up with the name from an 80’s anime called California Crisis. It’s an anime showing appreciation for California and we feel the same way about japan. We were both born and raised in California so we found it very fitting. Perfect Blue is our favorite movie and with the anniversary happening it all just fell into place!

Your band is comprised of Lauren Lusardi of PLASMIC and well-known American JPOP Idol Stephanie Yanez. Would you both discuss your individual backgrounds in music and performing and the events that led to you two meeting and deciding to form a music group together?

Plasmic:  I might look like a happy colorful girl but I am a very manically depressed human. Music has always been an outlet for me. I would confiscate my parents 80’s cassettes and teach myself how to play the synth leads on our family piano. Mark Mothersbaugh of Devo was my biggest inspiration growing up. Writing lyrics and belting out your feelings is the best form of therapy I could ask for. As I got older, I taught myself music production, started creating my own recording studio and independently started releasing my music and playing shows around LA. I also love writing and producing songs for other artists.

Stephanie: Ever since I was a little girl I have loved music and singing. Before singing in the anime scene I use to perform in the underground hip hop scene writing soulful songs inspired by anime series. Then once I won AX Idol at Anime Expo I started working with Japanese companies and touring all over the States and in Japan at Anime cons, Japanese festivals, and venues. 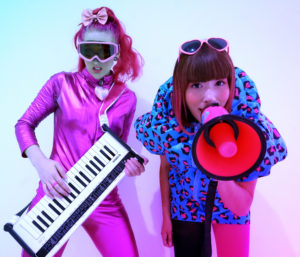 For Stephanie: What’s the typical reception to your general aesthetic and the fact that some of your music catalog is sung in Japanese? Do people in the community embrace it? What did they think when you did your recent tour in Japan? And how did YOU feel about that, doing a tour in Japan?

For Plasmic: You’re pretty visible in the local music scene yourself as a solo act. Would you please talk about the current Los Angeles music scene and the struggles or challenges you experience by putting yourself out there and trying to make your mark?

Plasmic: Thank you! Being a musician in LA can get tough since there are so many of us, but being a one-woman band makes it even harder. I get underestimated from time to time by sound guys and booking agents but all their bias vanishes once they actually see me perform. I smash the patriarchy with my Keytar and I’m excited to bring that to the scene with Stephanie.

What’s the strangest, weirdest, or most unique fan story you guys have? Has anything happened during a show or at a convention that you think is worth discussing?

Plasmic: I always get all protective mom with Stephanie! Fans have found her phone number and just recently her Instagram was hacked! We joke that she’s actually Mima from Perfect Blue. But she also has amazing fans who draw fan art and come to every show! I have some amazing fans that come to my shows and know all the words to my songs. It’s pretty Surreal! Of course, being a femme in the music scene you get gross dudes sliding in the DM’s or even following me to my car when i’m alone loading gear. I had a guy ask me if my Keytar was a purse and I proceeded to shred his face off on stage. But other than that, the awesome people really stand out. I have had fans gift me barbie dolls at shows and buy my handmade merchandise and it really means the world to me.

On the flip side, what are some of the most amazing things that have happened to you because of your involvement in the music scene? Have you met any of your heroes or people that influence you?

Stephanie: I have had the honor to create original music for the online avatar game TinierMe and was the first American to work with Hatsune Miku officially. I also was a host for a Japan travel documentary for Anime Selects Comcast On Demand called Crazy Sexy Tokyo. It was shown all over the States. Basically, they filmed me going to awesome places in Tokyo having fun. And I’ve also performed many times out in Japan and have modeled in Japan as well. I have done modeling for all my favorite brands like galaxxxy, Listen Flavor, ACDC RAG, Her Universe, Studio Ghibli, and Hot Topic.

Plasmic: There’s been some pretty wild stuff. Being a Taco Bell Feed The Beat Artist is pretty awesome. I’ve gotten to perform alongside some big-name icons like Dj Keoki, Miss Kittin, and Amanda Lepore thanks to Danny Lethal owner of Lethal Amounts! I just toured London with one of my favorite riot girl bands Dream Nails. I’ve been really lucky to work with Yamaha Music designing sounds on soundmondo.com with my Yamaha Reface CS which they gifted to me.

I know both of you are both deeply involved in fandom, which is a topic we love on Nerdbot. What are some of your favorite shows/animes/franchises that you feel helped shape and influence you and the art you produce?

Stephanie: The first anime I ever watched was Unico when I was 4 years old. At the time I didn’t know it was even an anime movie. But once I got introduced to Sailor Moon I started finding out the majority of the cartoons I watched as a child were anime series or movies. Sailor Moon for me was very relatable because I am basically Usagi. I am extremely clumsy, got bad grades in school, late to everything, loved food, and cares very deeply for everyone. So when I watched Sailor Moon I seriously thought someone was watching me and made the character based off of me! Neon Genesis Evangelion was another anime series that really shaped me. At the time I watched the series I was not very happy but towards the end of the series I really started feeling better about myself. The series really helped me through that time when I wore black everyday. Now I hardly wear black.

Plasmic: I Love Sailor moon, Revolutionary Girl Utena, Jem and The Holograms, Madoka Magica, Neon Genesis Evangelion, and Yurikuma Arashi just to name a few. Sailor moon was the first time I saw strong queer people that weren’t comic relief. I recently got Haruka and Michiru tattooed on my arm. I watched the tape’s religiously and they helped shape the strong femme power I embody today. 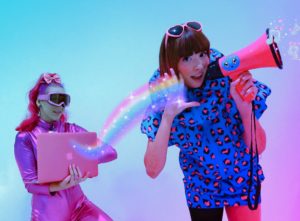 Yeah, I’m definitely going to have to see that Haruka and Michiru tattoo! They were my heroes when I was thirteen. What are some franchises/media/or hobbies you’re both into that people might not expect?

Stephanie: I love bowling and was on a team back in the day! I love Horror movies like Carrie and Psycho, I collect gremlins, and I see dead people.

Plasmic: I was a competitive Ice Figure Skater from age 8 to 17, but now I just do it for fun. I have loved roller skating ever since my wife Olivia Newton-Jon blessed my TV screen in Xanadu. Although 99.9% of my time goes to music production and songwriting, I love playing Bayonetta!

Would you please share what your vision or goals for Cali Crisis are? Where do you two want to showcase this musical venture and what sort of original music and/or covers do you have in the pipeline? Do you think you’ll be adding more band members to the act, or are you keeping it small with the two of you?

As far as adding more band members goes, we’re a really good dynamic duo that is open to collaborations. We have some really cool original music and covers coming out soon. One of them is about Akira! We both have very big dreams like touring the world and playing with our favorite artists Kero Kero Bonito, Kyary Pamyu Pamyu, Perfume, and Night Tempo! Our goal as Cali Crisis is to bring joy and female empowerment to a community that is in dire need of it. The nerd community is a very dark place for women and queer folks. We want to be the Magical Girl Hero’s we needed as kids.

And before we wrap it up, where can our readers find you? Do you have any other new projects you’d like to plug or make sure we’re aware of?

Here are our social media Links! A simple follow on Spotify would mean a lot to us! Support your local Magical Girls!