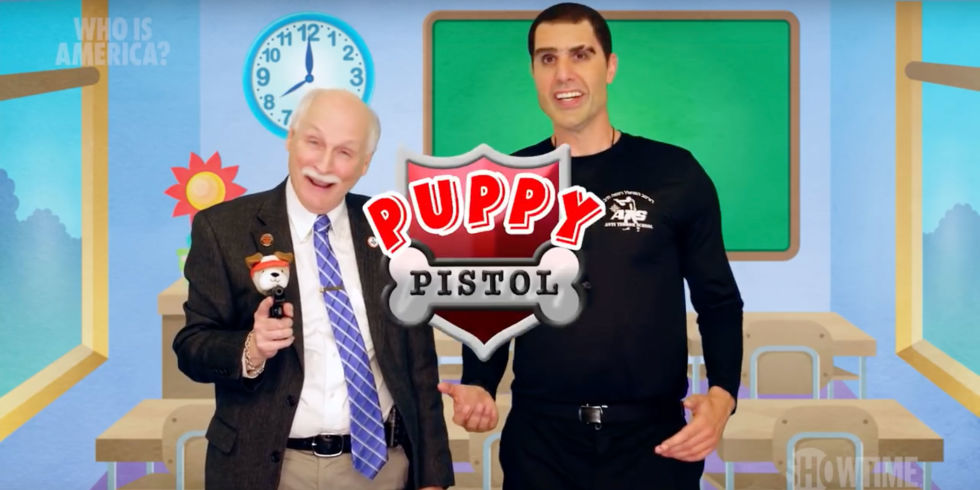 “Who Is America?” : Sacha Baron Cohen Has Answers We’re Not Ready For

Open that file on your mental desktop that says “Cannot Be Real.” Get ready for more reality that you simply cannot reconcile. Put on your Made In China MAGA hat or kneel on the sidelines — because you’re not ready for what Sacha Baron Cohen is putting out there with Who Is America.

Who Is America would be the kind of “step too far” subversive satire that the cultural left would applaud as an evocation of the current state of American affairs if it wasn’t, you know, real.

This elevates the material of Cohen’s latest project from not just the theater of the absurd but to a Sodom and Gomorrah (not the Marvel one) indictment of an empire on fire while Cohen, Showtime, the internet buzz machine and the audience leans back, neither knowing to laugh or cry, pulled simultaneously and hopelessly into both.

In his first series since Da Ali G Show in the early aughts Cohen comes back to TV like Michael Jordan came back to basketball… to dunk on everyone basically, after, it appears, hanging out with a bunch of damned cartoons. These cartoons just happen to be real live Americans, caught on camera, with Cohen portraying various identities not so much to trick, as to expose. Whether that’s entrapment or merely drawing vampires into the unforgiving radiation of daylight, the audience must decide. But it is comedy, even if it severely pierces as it punchlines.

The dizzying despair and hilarity of Cohen’s new show bottles the madness of America in 2018 while demanding it answer for its sins; staring itself down in the mirror of cable television.

We are nearly a year out from (open that mental folder again) a weekend where Nazis and white supremacists marched openly in an American town and a counter protester died at their hand. A year later, it’s hard to tell what justice has been reached, if any shame has taken hold.

Conversely, two weeks into Cohen’s new show we have:

Cohen, who in recent years has slipped a few Hollywood rungs and into that special obscurity that is the Borat references still being made by that desperate dude in your office, reasserts himself here in an incredible way.

Across a handful of characters (including the NPR liberal of flyover country nightmares, Dr. Nira Cain-N’Degeocello, Lock-Her-Up, #FAKENEWS! super-conservative Billy Wayne Ruddick Jr, and the thus far most effective, “former MOSSAD” super soldier Col. Erran Morad) Cohen has emerged from his apparently still exemplary character forge with perfect foils for American stereotypes. I just can’t imagine he would have ever imagined they would have responded so well for his thesis.

One wishes that Cohen’s sharp-as-the-knife-that-killed-Caesar comedy would have failed miserably. That the trap, sufficiently in place, would have never sprung. That instead of a season (or more) of …entertainment?… we instead got a muted feature documentary. A kind of, “I tried, but you caught me” shrug that would feel like our better angels patting us on the back.

Ladies and gentlemen, angels do not show up on camera, or at least not with the demons we are forced to face.

Cohen’s farce seems to know the wound it has exposed and hypothesized. At times he lets his characters lean into the silly and off of the damning. Dick Cheney, for example, doesn’t seem to get all of the “dick” jokes flying over his head. But overall Cohen barely has to put Mentos into the Diet Coke, so to speak. Jaw-dropping societal explosions and faux pas are aplenty, and demand to be seen.

As a recently released prison inmate in the first episode Cohen manages to convince a high-class gallery curator that he makes portraits from his own excrement (and …other… fluids); and she, through strained face and somewhat knowing eyes, manages to say (genuinely?) that it’s brilliant. This fodder is “tisk tisk” level and honestly, not super-entertaining and as sophomoric as it sounds. Cohen is a comedian who cannot resist the silly, even when box office receipts say that most aren’t interested.

But this seems to be both a commitment to 1) entertainment value and 2) a kind of fairness. And here’s where anyone who’s somehow reading this and also tuning into Fox News will get pissed: while Cohen goes out of his way to go after both the left and the right, the right proffers far more rubes ripe for ripping.

In the show’s first segment Cohen tries to “get” progressive darling Senator Bernie Sanders. Bernie treats Cohen’s motor-chair bound, Tump-devout “Truthbrary” founder with empathy and respect even as Cohen leans on the ridiculous. In episode two Cohen, in the guise of the same character, meets with prominent Trump critic and former newsman Ted Koppel, who’s also a little too intelligent and respectful to fall into any trap outside of meeting with this caricature to begin with. At the other end of the spectrum Cohen manages to convince a serving member of the GOP to agree to the idea of taking up-skirt shots of women by “acting Chinese” with a selfie-stick (while talking about sushi, by the way) to verify if they’re terrorists. That’s to say nothing of the other gun rights advocates and current and former members of government saying kindergartners should be “kinder-guardians”. Somewhere in the middle a prominent Southern Republican couple of fundraisers come off as (understandably) strugglingly hospitable to Cohen’s NPR character as he tries to rise them.

Across the board, and from segments we haven’t even seen yet, especially the famous have cried wolf. They were duped, lied to, “gotchya-ed” – to quote the originator of the phrase and current “victim” Sarah Palin. And there’s no doubt Cohen’s production went to great lengths to convince some of it’s more prominent guests. But all that being equal, is there ever a situation where you should go on camera putting guns in stuffed animals for children, or signing a water-board kit (which is now available on eBay)? This kind of spectacular lack of self-awareness and speed to kowtow to base instincts of a political extreme hold up the most unforgiving mirror to our current culture. That’s all even before the non-“elites”. The people we don’t want to believe exist, but are out there. Whether it’s the Arizona townspeople that proclaim their racist bonafides or the vain reality star willing to fudge charity work for further fame. Some have already apologized. Some are still proud. Some, as it happens, are still President. But what are we to say confronted by it? Does it even matter?

That is the question Who Is America? dares to ask – that, just like a tragedy in Charlottesville, or shooting in Parkland, or a “summit” in Helsinki – I fear will go ignored by too many, unaddressed by those that could. Presented with evidence, even in such a hysterical package, will we fess up? Will good come out of the woodwork and demand accountability? Surely Cohen is depicting extremes, and the majority of us are better than this… right? Writing this article in the middle of a dark night of the soul will certainly reveal Representative Jason Spencer (that’s our “n-word” guy) resigned or rejected by morning, right? Or… by way of vanity, exhaustion or willful ignorance will we just watch it all burn? I don’t know that either. But I do know that on the hill overlooking the fire, Sacha Baron Cohen is playing the fiddle.

To examine the evidence yourself check out the gun segment from the first episode below, and stay tuned to the show’s YouTube page and tune into to Showtime every Sunday at 10 PM ET for more.