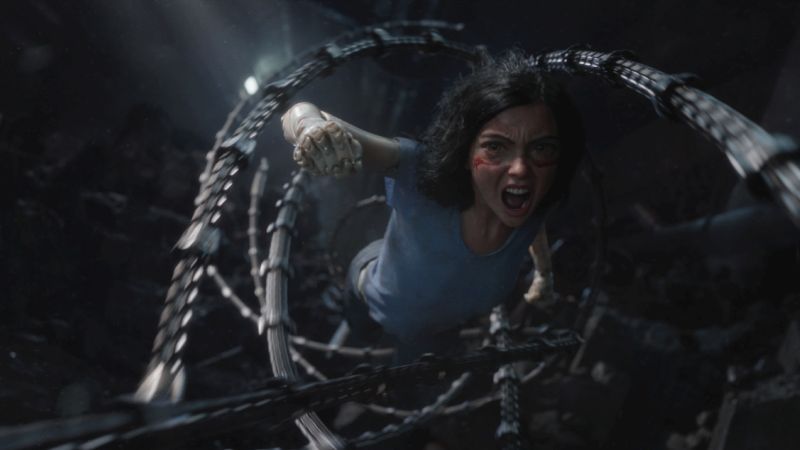 Battle Angel. Alita. Gally. Gunnm. Whatever you want to call the franchise, we can probably all agree on one thing.

The American produced live-action movie looks amazing. Yes, I even like the CGI eyes; I think its super stylized and makes for an inhuman aesthetic.

As reported by Deadline, 20th Century Fox has taken the wraps off the first trailer for Alita: Battle Angel this morning, after first showing it to a crowd at Comic-Con over the weekend where they also screened 18 minutes of the pic based the Gunnm manga series by Yukito Kishiro.

Avatar‘s James Cameron and Jon Landau produced the ambitious and long-in-the-works adaptation and put it in the hands of director Robert Rodriguez, with Rosa Salazar starring as Alita, who awakens with no memory of who she is in a future world she does not recognize. She is taken in by Ido (Christoph Waltz), a compassionate doctor who realizes that somewhere in this abandoned cyborg shell is the heart and soul of a young woman with an extraordinary past. Cameron and Laeta Kalogridis wrote the script.

Much like when the original manga was translated into English and the title Battle Angel replaced Gunnm, the name Alita for our lovely cyborg-warrior girl seems officially permeated in place of Gally, which truthfully saddens the Oldtaku in me. For those of you new to the word, an Oldtaku is someone whose interest in anime peaked in the 80s or 90s and we can’t either A: stop watching classic anime. Or B: acknowledge that anything good was made after 1999 unless it was Chobits, which what do you know, is also about a robot girl who is more powerful than we realize that just wants to understand what it means to be human.

Battle Angel, which I originally viewed in 1998, was one of the most impactful animated films of all time for me. I have a soft spot for stories about robots and inhuman creatures trying to figure out their philosophical purpose and what it means to be human. Typically, these creatures fail or there’s a severe price tag to their craving of knowledge, so therefore, my heart breaks upon viewing. I know I won’t get out of this new Alita: Battle Angel film without bawling the ugly cry. So, fellow movie goers, I owe you a round of cokes.

For those unfamiliar with the franchise, you can check out a trailer for the original animated film Battle Angel right here.

Are you a Battle Angel Alita/Gally/Gunnm/Cyborg Girl fan? Are you excited by this movie? Does the aesthetic or the CG eyes bother you? Tell Nerdbot about it in the comments and get the conversation going!

“Who Is America?” : Sacha Baron Cohen Has Answers We’re Not Ready For