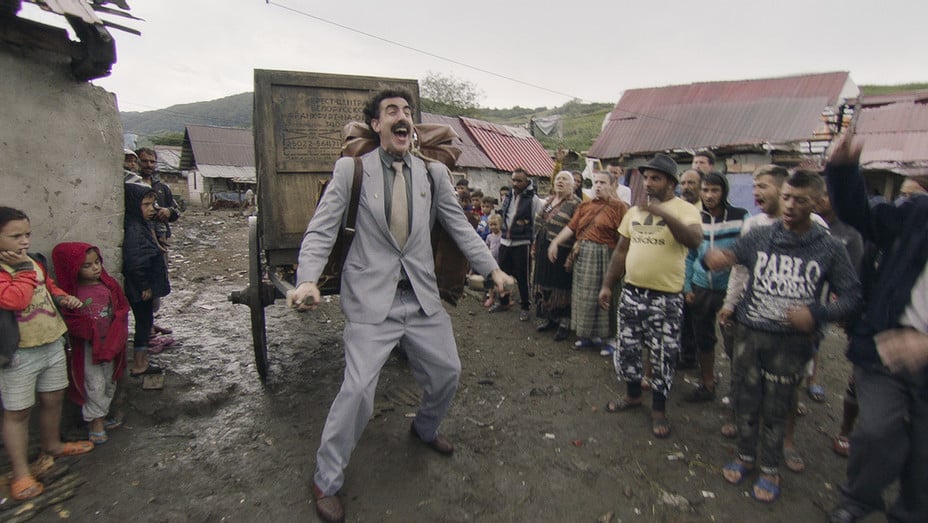 Already a front runner for this year’s award for the longest official movie title, “Borat Subsequent Moviefilm: Delivery of Prodigious Bribe to American Regime for Make Benefit Once Glorious Nation of Kazakhstan” throws us back into the pains of watching Americans in their natural state: generally horrible human beings.

Now, there’s some light at the end of the tunnel as this film features nearly two individuals who are actually helpful and try to do the right thing. Unfortunately for the rest of the individuals who fall in front of the camera, they are featured in all of their unvarnished loathsomeness.

“Borat Subsequent Moviefilm,” led by Sacha Baron Cohen as the titular Borat, follows the now down-on-his-luck former journalist having been sentenced to live in imprisonment for the humiliation brought on the country of Kazakhstan by his previous film. The country wants to get into the good graces of the US&A by presenting a monkey to the “supreme leader,” Donald Trump (and later Mike Pence). And since the primary expert on the US&A in Kazakhstan is Borat, they make him a deal; if he can gift the monkey to Michael Pence, then his earlier crimes would be forgiven.

Along for the ride this time into the wilds of America is Borat’s 15 year-old daughter, Tutar (played by the 24 year-old Maria Bakalova), who winds up being the gift for Supreme Leader.

For anyone not familiar with Cohen’s character or style of moviemaking that Borat entails- basically, there’s the main arc as noted above, but then it’s filmed in an almost documentary style, with Borat and Tutar in on the joke, but every American featured believing that the two are part of an international journalism exchange program learning about America and it’s ways.

They do have to wind up changing up Borat’s regular look due to the original film’s popularity, and his now being so recognizable, but then they’re off to the race and politic wars.

Cohen does get away with jokes that few other performers could readily manage, somewhat in the same way that Mel Brooks can sing “Springtime for Hitler” and not cause a riot. The main difference now is that 14 years ago when the first film came out, the country wasn’t quite so self-aware about it’s internal dichotomy between Liberals and Conservatives. So, seeing people being exposed had a certain shocking humor to it. But now in 2020, the battle lines are seen daily on the news, so it’s less funny and more of a sad resignation about the whole thing.

It’s like being the butt of a long drawn-out joke that you already know, but you let your racist/sexist uncle tell anyway because then it’ll be over all the quicker. However perhaps it’s best to let them tell the jokes, at least that way everyone has less of an excuse to not know your uncle already had those beliefs to begin with.

There are some jokes that work, but then there are scenes where Tutar’s behavior during a father/daughter dance at a cotillion which will probably leave some of those in attendance asking how much more crass can Borat go. Then they catch themselves knowing better than to ask such a question.

If you liked the first film, you’ll likely enjoy this one just as much. If anything this one feels more vulgar, but the narrative is more cohesive. There are several scenes that were in the trailer that don’t appear in the film, however those will likely be restored when we get the director’s cut of the DVD release.