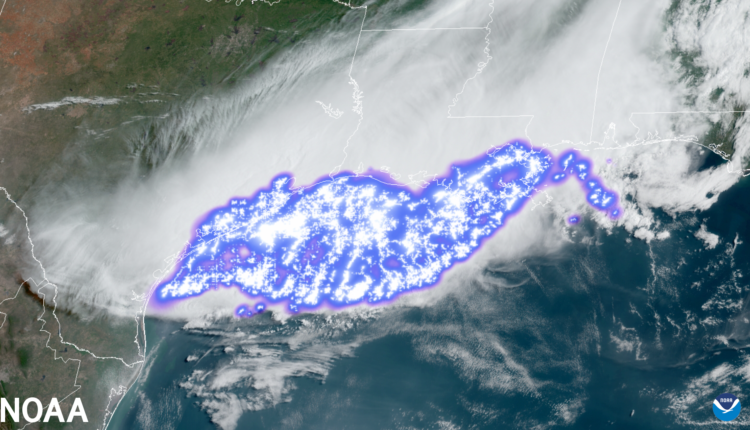 Well, we’ve done it. We’ve angered the Gods like never before. Sure, we can attribute things to the flow of electrons and a discharge of electrical energy, but it’s much easier to say we angered Zeus, and he let us know about it. How did he send us the message? By delivering the longest lightning bolt in history as officially confirmed by the World Meteorological Organization.

Though only confirmed a few days ago, the lightning strike in question happened back on April 29th, 2020. The bolt went all the way from the central coast of Texas to southern Mississippi, in a cloud-to-cloud strike.

As a matter of national pride, this record of 477 miles beat the previous record of 440.6 miles that happened back in 2018 across southern Brazil. So if you’re feeling competitive and want to beat Brazil in something, then congratulations, we beat them. These lightning strikes are otherwise known as megaflashes, and are not a common occurrence as you can imagine.

To facilitate this kind of event, there has to be a large expanse of electrified clouds that aren’t jettisoning electricity at a very high rate, otherwise the strike would not continue, but fully discharge. Newsweek reports the distance of the megaflash would be equivalent to the distance between New York and Columbus, Ohio, to put that in another perspective.

Additionally, the WMO confirmed a second record. This time in duration of a strike instead of the distance. This one occurred in the skies above Uruguay and Argentina on June 18th, 2020. The lightning lasted for just over 17.1 seconds which beat the old record, also held in Argentina, by about a third of a second. Argentinian skies must like their lightning to linger for a while.

On a positive note too, this might be one weather phenomenon that is not actually resulting from climate change. Researchers note that this kind of activity may be happening all over the place for years, we’ve just become better at being able to track, monitor, and see lightning strikes thanks to advancing technology. Or maybe it’s that very advancing of technology that has angered the gods, and now Zeus wants to kill us because our science and hubris has brought us to close to the metaphorical Olympus. Six of one, half-a-dozen of the other.

4 Best Picture Frontrunners That Don’t Deserve Nominations, 5 That Do