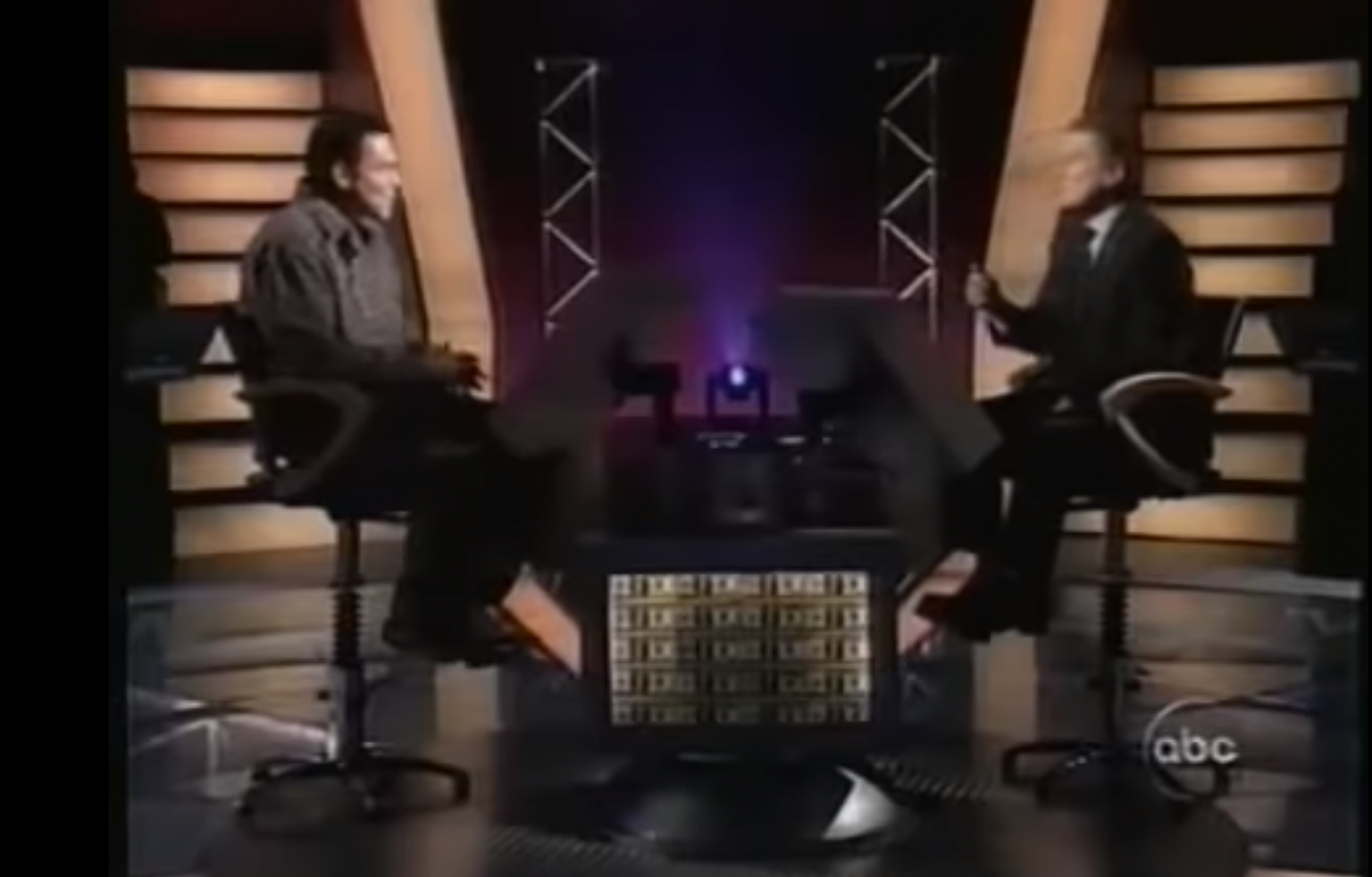 It is unbelievably crushing to know that Norm MacDonald is no longer with us. At only 61 years old and still ferociously funny, he had a lot to give the world with his brilliantly comedic mind. When I say brilliant, I mean it in a way that I don’t think a lot of people give him credit for; Norm was incredibly well-read and intelligent, despite what his sense of humor may have led you to believe.

In 2000, Norm basically won the million dollar prize on “Who Wants to Be a Millionaire” until host Regis Philbin talked him out of it.

Back when “Who Wants to Be a Millionaire” revitalized the quiz show boom of the late 90s, I used to watch it religiously. Even more than that, I had qualified for the show twice through the phone-in quiz they had, but was too young to qualify to appear. I distinctly recall watching every episode when it was on and was glued into it even more when they did the celebrity edition in which Norm MacDonald appeared.

At the time I didn’t really follow Norm outside of a couple episodes of “Saturday Night Live,” and the advertisements for his show on ABC. So my real introduction to him came from watching him on “Who Wants to Be a Millionaire,” and I’ve got to say… it wasn’t a very strong first impression. Norm was the last contestant to appear on the main stage of the celebrities being the last one to win the “fastest fingers” competition where four items had to be put in a specific order on a computer screen.

Because Norm was the last one, the show apparently decided to tease him by giving him a throwaway question:

Months later, ABC would rerun this episode with a VH-1 “Pop-Up Video” crossover, giving little facts about the episode as it went along. The fact they put along with this clip was stating how angry this made Norm even though he hid it well. Norm was eager to prove that he’s an intelligent person, and didn’t need help like this in order to succeed.

That same philosophy carried himself through the first several questions. On the celebrity version of the show, all celebrities are playing for charity. Norm’s charity of choice was The Hole in the Wall Gang, founded by Paul Newman. For Norm’s appearance, he was guaranteed $32,000 for the charity. Because of this, there was a very joking atmosphere among celebrities on the show, where they would often help each other from the audience, since the money was guaranteed anyway.

Norm didn’t want any of that though, according to the pop-up video facts. Norm had never appeared on a game show before this, and was adamant about taking the question part of it seriously in terms of trying to win legitimately. It’s also worth noting too that Norm was a very avid gambler; so he took things like this with a serious amount of thought and care.

So on the first question where Norm is truly on his own, for $64,000 he’s posed this question:

That look on Norm’s face is him trying to read Regis as he asks him questions over whether or not this was a big news story in New York. He’s actively trying to get a response from him because he thinks Regis knows the answer to the question ahead of time. In fact, Regis doesn’t; in order to prevent exactly this type of thing from happening. Norm actively admits he doesn’t know anything about “the rock and roll,” so he ends up asking the audience. The poll comes back overwhelmingly for Eric Clapton, to which Norm agrees with the answer and wins the $64,000.

Norm flat-out says that the answer has to be the Southern Cross; he’s sure of it. However, he doesn’t like the look that Regis gives him when he says that, causing Norm to doubt himself. At this point in time, any wrong answer that Norm gets will lose any further winnings, dropping him back to $32,000. This becomes increasingly more important the further up the ladder Norm works himself with the questions.

Whether Regis knew that Norm was a gambler or not, I don’t know. But I do know from one of the pop-up facts, that because this was for charity, Regis had tried to implore Norm not to be too reckless. Apparently Norm took that advice and ended up calling his friend, Sam Simon to get some help. This is the same Sam Simon who worked on “Cheers,” “Taxi,” and “The Simpsons.” Sam is 100% sure the answer is Southern Cross. Norm guesses that answer, is correct, and is frustrated that he just wasted a lifeline.

Here comes the next question:

Norm almost immediately states that he thinks the answer is either Madrid but he’s not sure, as it could be Lisbon. He wants to use the 50/50 lifeline but is hesitant. Now that he’s said what he thinks it is, he asks Regis if now the 50/50 is going to leave him with those choices. Norm wants to know if there’s some guy back there who will just leave those answers behind. Regis assures him that’s not the case, in fact, it may leave you with the other answers to pick from that you weren’t even thinking of. That said, Norm decides to use the lifeline.

Norm. Was. Not. Happy. That look on his face is one of “I F***ING KNEW IT, REGIS!” He recovers from it though and before Regis has a chance to talk him out of it, Norm answers Madrid and gets the question right to win $250,000.

Now Norm’s going for half a million and is presented with a question very much out of his typical wheelhouse:

Norm is out of lifelines and also doesn’t know much about musicals. He does know about Samuel Beckett though, but doesn’t recall Beckett writing any of these things. To an extent, Norm is right. None of these things were really written by Beckett except for a portion of “Oh! Calcutta!” which was made up from sketches written by different people. Because of its uniquely written nature, and Beckett only writing a small piece of it, that’s probably why Norm doesn’t associate the two. He does recall however, someone telling him that “Oh! Calcutta!” had some dirty subject matter, and he equates Calcutta with being a fairly bleak place to set something in. Therefore, he wants to answer Beckett. Regis however, is trying to gently prod Norm to not risk anything and walk away, given that he’d only be guessing and sacrificing a large degree of money if he’s wrong. Before Regis can protest any further though, Norm blurts out, “‘Oh Calcutta! Final answer.”

Regis’ eyes dart open quickly and he reflexively spurts out “NO!” but tries to cut himself off knowing that it’s too late. Once a contestant, celebrity or not, says final answer, that’s the answer that must be taken. Regis really tried to stop Norm, knowing the money that was at stake but Norm beat him to locking in the answer. An exasperated Regis looks down as his monitor almost as if to say, “Norm, what have you done.” Only to look back up with a small degree of shock and say, “He just got it for a half million dollars!”

The crowd erupts in a mixture of disbelief and excitement as he goes into the million dollar question:

Norm then backs down from the answer because of this and says to just give him the half million. Regis then tries to backpedal and asks Norm if he wants to walk away. Norm answers back that he doesn’t, he wanted to answer the question. He thinks Pinehurst is too obvious and that the answer is therefore The Greenbrier. Unfortunately for Norm, Regis starts doing this expression:

Regis’ complete look of desperation and fear pushes Norm into walking away from the question so as not to risk losing over $400,000 for the charity. Regis does ask Norm what his guess would’ve been if he had gone for it. The answer? The Greenbrier. Norm’s reaction:

Another look of “YOU GOTTA BE F***ING KIDDING ME! I F***KING KNEW IT!” And to his credit, whether it was a complete guess or not, yeah, he did know it. I seem to remember one of the pop-up facts stating that Norm had an inkling as to the answer because he recalled reading something about it at one point. Unfortunately, because Norm never said, “final answer” at any point, he never officially guessed it. One could easily argue though that Regis actually talked him out of it and interfered with the game process. But for all intents and purposes, Norm basically won “Who Wants to Be a Millionaire” even if it wasn’t official.

So in the coming days and weeks where we talk about Norm’s funniest bits, I really want people to remember what he did here. One of the reasons Norm was so funny was because he was so deceptively smart. He wasn’t the kind of guy who would tell you how smart he was, but then again as we found out, he also wasn’t the kind of guy who would tell you that he was dying of cancer. This moment though, was Norm’s chance to let his intelligence shine and it turns out that he was a lot smarter than he would lead people on to believe. Those who really knew him could see it, but to the casual fan or observer, Norm was quite good at putting up a ridiculous front.

The entire video of his “Millionaire” appearance can be viewed below, which is also quite funny with some of the barbed jokes Norm throws in from time to time.

Also, The Hole in the Wall Gang Camp is still up and running. If you want to make a donation yourself, you can click here for the link to their website.

Norm, you may never know how much you will be missed. Thank you for the laughs, for the heart, and for giving me one of the greatest game show moments in history that I will never, ever forget.