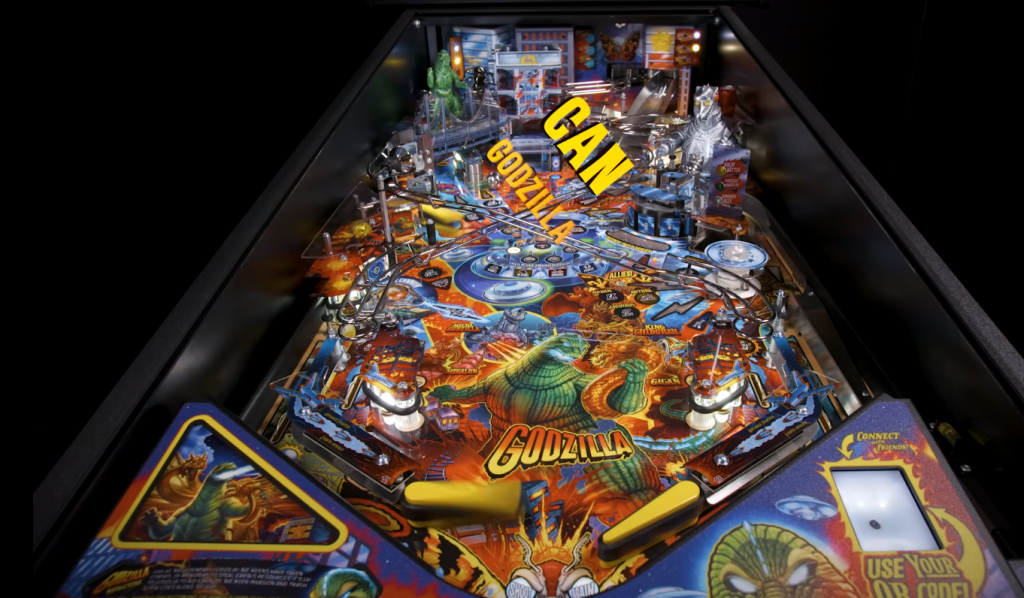 Being a fan of pinball in this modern time isn’t easy; we’re a far cry away from the mid to late 80s and early to mid 90s where pinball underwent something of a renaissance. Before “Pin-Bot,” it was a languishing past-time. After the hype of “Medieval Madness,” and the rise of home consoles such as the PlayStation and Nintendo 64, pinball faded back into obscurity. As died the arcade, so too died pinball.

But even though big name developers like Williams, Bally, and Gottlieb fell by the wayside, development of tables never officially stopped largely thanks to a company named Stern. And it’s thanks to Stern and a partnership with Toho, that we have a new “Godzilla” pinball table!

The monster Godzilla likely needs no introduction, but his very own pinball table is full of features that make this machine look like an action packed good-time. There are three models of the table that will be available, pro, premium, and limited edition. Pictured above is the pro edition, which despite being the “basic” model, so to say, still have a large degree of intricacy built into it. The ramps look to have an excellent flow to them, and the extra touch of some of them going through a collapsing building fits the “Godzilla” aesthetic nicely.

In the upper left is a metal cylinder that actually acts as a magnet that can catch or divert a ball depending on the circumstances or game mode. Depending on whether or not you like this degree of randomness to your pinball, it can be an exciting addition or a meddlesome contraption. In teh artwork you can see the names and artistic renditions of numerous other kaiju, including King Ghidorah and Megalon. And just to add to everything, the table plays the song “Godzilla” by Blue Oyster Cult, because damn right it should.

The premium model though, pictured above, takes things even further with what it has to offer. A keen eye will help you note that both the Godzilla and Mecha Godzilla standups are now actual figures instead of just cut-out props. The tower in the background where the ramps flow through also has additional pathways, made so because the tower can actually ascend and descend as if it’s getting destroyed during the course of your game. On top of that, the ramp leading out of the tower’s side has been replaced by a bridge that can be destroyed by Godzilla.

A “boss” battle if you will, against Mecha Godzilla can also take place in this version where you have to shoot the ball up against a magnetic plate on his chest. Multiple strikes will result in a Mecha Godzilla multiball.

The tower can also contribute to a multiball by locking multiple balls on top of it, leading to its “collapse.” Maybe it’s just the pinball geek in us breaking out, but the idea of having multiple chances at multiball is just really freaking cool.

If you’re interesting in picking up a table for yourself, you can purchase the premium edition one from a Stern pinball distributor for the sum of approximately $8,999. If that’s a bit much, no worries, you can get the pro edition for only $6,899. But if for some reason you can’t afford to just throw nearly seven grand at a pinball table on a whim, then you may just want to settle for finding a place that has one set-up for play as they circulate into the wild.

Maybe it’s childhood bias speaking, but I absolutely adore pinball tables and consider them to be a form of functional art. The amount of work that goes into the design of these things, from an aesthetic standpoint, as well as a playability perspective never ceases to amaze me. There has to be the right blend of challenge between giving the player a fair chance to succeed, while also allowing the owner to rack up some quarters off of the thing. Thankfully there are companies like Stern who are keeping pinball alive for the wizards among us to enjoy.