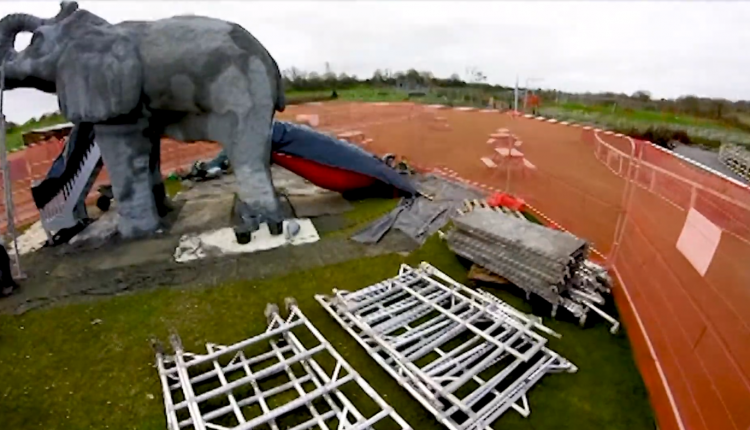 You ever want to crawl inside of an elephant and slide out of its anus? No, that’s not a sexual fetish we’re asking about. Nor is it a question that Captain Oveur asked Joey in the cockpit (that’s a real deep “Airplane” reference, kids). Instead, it’s a question you can ask yourself if you ever visit the elephant playground area of Noah’s Ark Zoo Farm near Bristol in the UK. So behold, the elephant butt slide:

As built by the talented people at Greenspan Projects Ltd. it is in all seriousness, an incredibly well made slide. Greenspan takes their projects seriously and on their website you can see a number of different projects they’ve worked on. From mini-golf courses to playground, to barbeques and bedrooms at LEGOland. There’s no shortage of things that they’ve put together under various themes.

As for the Noah’s Ark Zoo; it seems to be a pretty fun place for kids and families. Combing through their website, I did find a page that shows the elephant butt slide in the park. You can see it in the background image of their “Play and Adventure” page on the site.

Unfortunately, there is no one sliding out of the elephant’s butt at the time of the picture, but one would have to assume the lucky child who’d be sliding out would indeed be smiling. Because who wouldn’t be smiling after having the privilege of sliding out of an elephant anus? Isn’t that every kid’s dream?

Tripadvisor reviews have rated the park very well, but none made specific reference to the elephant butt slide. Which is a shame; though we’d have to assume that though don’t mention the slide as it’s just a given that it would be of exemplary quality. And in fact may be the greatest elephant butt slide in the world.

If you’re interested in what goes into the making of an elephant butt slide, Greenspan Projects LTD has an official YouTube channel where a time lapse video was put together showing the construction of the mighty mammal themed attraction. Again, the comedic element to the slide does not reflect the serious amount of work and effort that obviously went into this. And any company that’s able to poke fun at the absurd nature of a creation deserves some recognition for being good sports about things. Let’s just hope their attention to detail didn’t include making the exit chute uh… smell…

“Edward Scissorhands” House is a Free Museum in Florida!