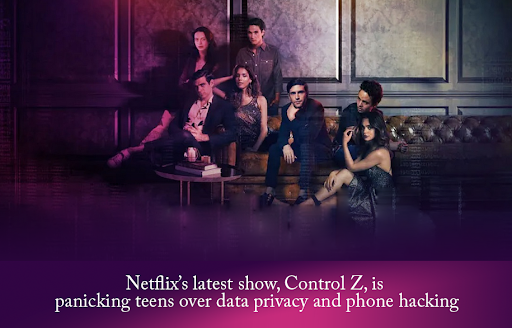 While Elite is about friends keeping each other’s backs and secrets, Control Z believes in having no secrets whatsoever.

Unlike my last teen show, Riverdale, which started off on a high note and ended up being too comic-y for my taste, I persisted in watching Control Z and Elite. Why? Because the latter shows, while being obnoxiously cheesy, were actually relatable to teens.

For someone who’s in his early 20s and just upgraded from being a teenager, I totally get why teens love the show. For one, high schools are nothing like how these Spanish shows tell you. You don’t have sex in the locker room or the lab floor, nor do you go around throwing pool parties and downing all possible drugs that exist on the planet. But watching your fantasies coming true, even if it’s in a show, is exciting enough for most teens.

But with Control Z, it has fostered a different kind of frenzy amongst teens—a hysterical epiphany that their secrets are not safe.

And while I think it’s okay for teens to panic a little, the possibility of something like Control Z happening in the real world is quite low. For one, there has to be a rich, broken kid who believes in taking revenge by exposing everyone. But honestly, the real world is different. No one really has that kind of motivation or the money to go that far.

But let’s talk about the possibility of something like that actually happening if someone decides to hack the smartphones of everyone at school. Yes, with a weak security protocol for on-campus Wi-Fi, it’s very much doable, and very easily, too. Statistics reveal that cybersecurity risks are not hypothetical anymore. Last year, the US witnessed a record-breaking number of school hacks, 408 to be precise. But these hacks don’t come out of teen grudges. They are strictly about money and have led to identity theft, credit fraud, and the loss of millions of taxpayer dollars.

For every school hack, it could either be a data breach, social engineering, phishing, ransomware outbreak, or denial-of-service (DoS) attack. But that’s a discussion for another day.

Yes, a little. Because that’s good for them. This way, they can act more responsibly. But parents need to stay on the watch and not let their kids sink too deep into their stress or worry.

Kids are emotional and impulsive. One spontaneous move, one wrong text, one random Snapchat, and all of it could go down the drain.

Kids don’t like hearing this, but it has always been the responsibility of parents to look after their children’s well-being. With the ever-changing dynamics of parenting, it’s important to keep reiterating who makes the rules in and outside the house.

However, most parents sound clueless when asked if they know how to keep their kids safe. And now that we are in this discussion, let’s discuss how children could be kept safe online.

Knowing the risks of getting online, and especially what goes around with teens, is the first step in planning a viable digital routine for your children. But it goes beyond knowing stuff. It’s about deriving a social conscience and then passing it down to your kids that will help them tread away from the monstrosities of bullies, predators, scammers, and haters.

2. Not avoiding the alarm bells

When kids stay out for too long, spend too much time with friends (whom you don’t know of), or when they lie to you about their whereabouts; these are all the telltale signs of a child in trouble, and the alarming bells for parents to take a note.

Parents, however, also need to teach their kids to notice these alarm bells on their own. It’s about making your children realize when to walk away from a situation or conversation. Parents should sit down with their children and be open to them about tenuous moments—those tough and pivotal decisions that can get easily clouded by a rush of adrenaline or dopamine.

3. Having a fair amount of control over their decisions

This sounds far fetched, but it is what it is. You, as their caretaker and parent, will never make delirious decisions for them. So, instead of your kids relying on their friends to make decisions in their lives, it should be you next to them, giving them valuable pointers.

But it’s not just only about being their confidant. It’s about making sure that you take over the wheel when the stakes are high. For instance, jumping in at the right time to save your child from a possible encounter with a sexual predator or when they are about to post something private online or getting scammed.

Most parents don’t have any authority over their children’s decisions nor do they know how to pull it off.

Here’s how to make that possible.

4. Monitor what they do

No one likes a nosy parent. Your children wouldn’t want you to jump in every time they are in a little trouble.

Knowing when to take a drastic measure is tricky. That’s why experts recommend watching over your children with parental controls, especially through their phones. Most smartphones are equipped with built-in options to limit screen time or to block access to certain apps. However, that’s not enough. Third-party apps offer a much more discrete monitoring experience while providing you all essential tabs on your children.

With Xnspy or some other top-of-the-line smartphone monitoring apps for Android, you can get vital details like their friends’ list, daily conversations, browsing history, stored multimedia, and so on; all of which are important to analyze what kind of stuff or people your children are into.

If you have minors who have been in trouble before, Xnspy gives you the option to get significant control over their phone, like the apps they can use. Or if you want to keep secret tabs on your child, Xnspy has features like call and surround recording and location tracking. You can mark specific words, locations, contacts, or emails on alert and get relevant activity updates as they happen.
It’s not easy being a parent, but teens show us why we need to be on our toes for our kids’ safety, and monitoring apps for Android like https://xnspy.com/ tell us how.

Dreaming of Minimal Fashion? Here Are Some Jewelry Pieces You Need to Invest in Now