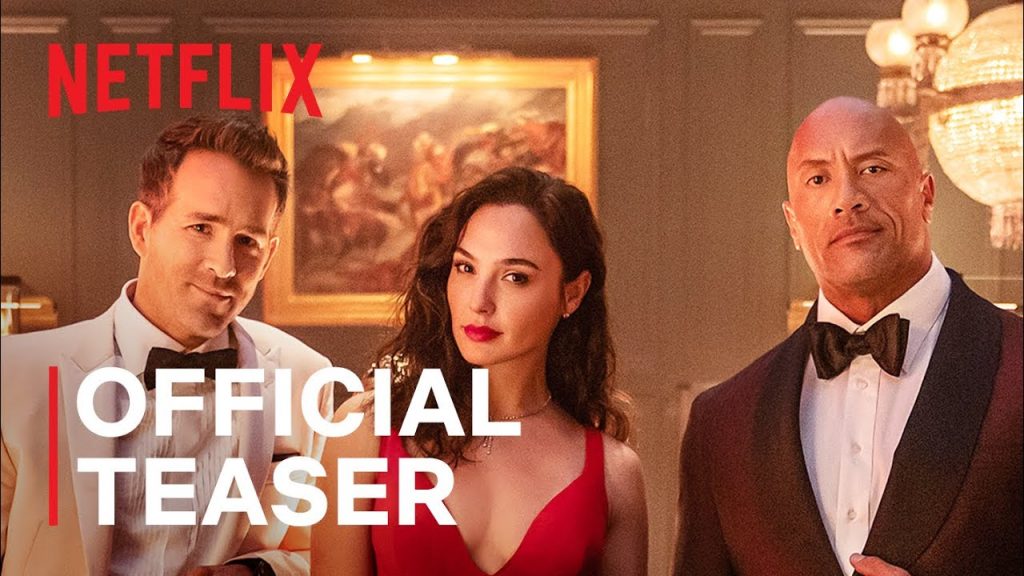 Looks like Netflix heard my birthday is coming up, and gave us our first look at the new star studded action comedy “Red Notice.” The film looks to deliver on just about everything you could want an action buddy cop comedy starring Ryan Reynolds and Dwayne “The Rock” Johnson. I remember watching “Hobbs and Shaw,” and clamoring for a team up movie of Reynolds and The Rock, as their brief banter back and forth were some of the better parts of a rather forgettable film. Netflix seemed to have had the same idea, putting the two stars together and adding Gal Gadot just to make sure there’s no doubt about whether or not “Red Notice” will be a surefire banger.

Official synopsis according to Netflix is as follows:

“When an Interpol-issued Red Notice — the highest level warrant to hunt and capture the world’s most wanted— goes out, the FBI’s top profiler John Hartley (Dwayne Johnson) is on the case. His global pursuit finds him smack dab in the middle of a daring heist where he’s forced to partner with the world’s greatest art thief Nolan Booth (Ryan Reynolds) in order to catch the world’s most wanted art thief, “The Bishop” (Gal Gadot). The high-flying adventure that ensues takes the trio around the world, across the dance floor, trapped in a secluded prison, into the jungle and, worst of all for them, constantly into each other’s company. The all star cast is joined by Ritu Arya and Chris Diamantopolous. Directed and written by Rawson Marshall Thurber (Central Intelligence, Skyscraper) and produced by Hiram Garcia, Dwayne Johnson and Dany Garcia of Seven Bucks Productions, Beau Flynn’s Flynn Picture Co. and Thurber’s Bad Version, Inc., Red Notice is a stylish globe-trotting game of cat-and-mouse (and cat).“

The newly released teaser highlights the humor and action that “Red Notice” plans to deliver. And boy does it look bonkers. There is a strong sense of derivative here, with plot points feeling a lot like other heist and action Netflix Originals recently. “Underground 6” comes to mind, and while they clearly aren’t the same film and this one doesn’t have the moist, yellow Michael Bay hue, you can definitely feel the other influences from other films throughout the teaser. This looks to be a conglomerate of other action films, ramped up by a seemingly massive budget that spared no expense on its leads as well as some of the big action set pieces show in the teaser.

Despite feeling very familiar, the film still looks like it’s going to be a blast. The action is big, the banter is on par with what we would expect from two fast talking, wise cracking action stars, and of course, Gadot looks to be turning up the sultry charm and having more fun here than we’ve seen her have recently. I’m sure she loves starring in “Wonder Woman” as the titular superhero, but “Red Notice” seems to bring out the tongue in cheek, charming seduction she doesn’t really get the chance to do in her previous roles. The teaser is about 2 minutes, but it is pretty apparent that everyone is having an absolute blast here.

If you’re a fan of Netflix originals or action or comedy or any of one of the many stars that round out the cast, “Red Notice” should be high on the list. The teaser only increases my excitement for it, and I was already sold on the casting announcement to begin with.

Looks like I’ll be home with a stiff drink and a cheat meal watching “Red Notice” for my birthday this year when it hits Netflix on November 12th, 2021.