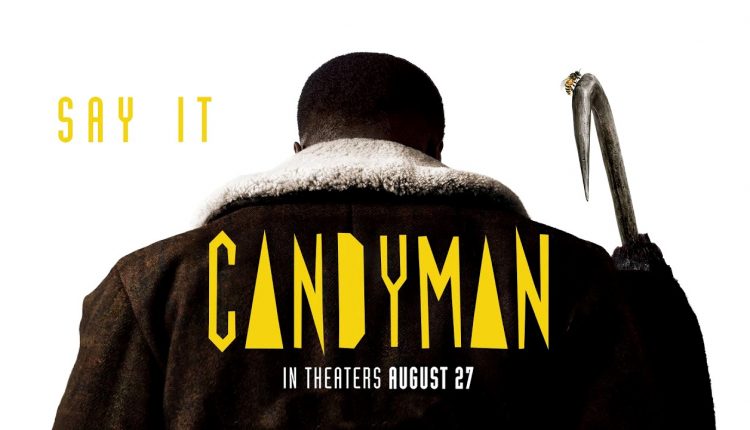 “Candyman” is Good, But It Could Be Better [Review]

I have a very strange relationship with the horror genre. I’m not opposed to it on any basis of fear or superstition, and I enjoy a good brutal death from time to time. But something about the genre as a whole doesn’t really resonate with me, so “Candyman” wasn’t necessarily a must see. Of course I was intrigued, and the original film still holds up pretty good, but if it weren’t for my responsibilities as reviewer I would’ve been fine to skip this spiritual sequel altogether. What “Candyman” ends up being is a collection of conflict. What it does well it does REALLY well, but like a number of other films that try to do too much, the film ends up failing to really stick the landing. It doesn’t quite bring together all of the stories it’s trying to tell as well as it thinks it does. There are some terrific elements here, and the film is in line with the original while also seeking to further the story and lore in unique and intriguing ways. But “Candyman” ultimately crumbles under the weight of its own ambition, having all of the promise of a masterpiece and falling just shy of greatness.

Directed by relative newcomer Nia DaCosta as well as written by DaCosta, Win Rosenfeld (producer for MonkeyPaw Productions) and horror icon Jordan Peele, “Candyman” serves as both a direct sequel and a continuation/reboot of the original 1992 film. It essentially gives it the old “Halloween” treatment in which in stakes its ties to the beginning only and ignores anything and everything that came after it. This is most certainly for the better, as the original “Candyman” is the only one that deals with the social economic and racial issues directly, which this new film tackles in spades. It tells the story of up and coming artist Anthony McCoy (Yahya Abdul Mateen II) who, upon hearing the legend of Helen Lyle (a great way to demonstrate how urban legends change and transform with each new generation) discovers the legend of Candyman. This legend has all but been forgotten over the years, with the story of Helen going mad being the new Cabrini-Green folklore. Unbeknownst to Anthony, he inadvertently summons Candyman once more and soon realizes he’s more connected to everything than he thought. As the bodies begin piling up around him, Anthony beings losing himself as he uncovers darker and darker secrets that lead him down a dangerous path.

There really is a lot to like here, namely DaCosta’s directorial skills. “Candyman” is directed really, really well, with DaCosta choosing to abandon the jump scare tactics and build the slow burn tension to a boil. Her eye for angles makes even the vast amount of implied violence terrifying and unsettling, and she provides a haunting atmosphere in a tapered and nuanced approach. DaCosta strikes a balance between in your face brutality and imaginative conclusions, both of which are extremely effective. “Candyman” can go from a couple being ripped to shreds in a dimly lit art gallery with unwavering cringe worthy injuries, to a long, peel away shot of the Chicago skyline with a woman being brutally murdered center frame but far away. It’s these kinds of clever camera tricks that keep the film buzzing by with effective creepiness, even as things move more slowly than one would anticipate. It’s very important to remember that THIS “Candyman” is pulling a tremendous amount of pacing and style from the original film and not our own faulty memory of Candyman the Slasher Hook Killer. That’s not really what happened in the 1992 original, and DaCosta does well to stick with these themes and pacing throughout her version.

The film is also very well acted, with Yahya once again demonstrating that his appearance in “Aquaman” was a fault of the film not being very good rather than a reflection of his actual talents. Yahya’s Anthony is both endearing and off putting, a man who is already wrestling with his own identity both in his standing as an artist and his soon to be discovered history. Though he spends most of his time slowly slipping into madness, Yahya does a terrific job in never fully abandoning his humanity, and while you get a sense pretty early on that the writing is on the wall for him, you still root for him to somehow make it out and overcome the odds. Likewise Tehyonah Parris (“Wandavision“) is solid as Briana Cartwright (Anthony’s art curator girlfriend) who becomes witness to not just the mental unraveling of her boyfriend, but engulfed in the Candyman lore whether she wants to or not. Parris too is really good, and her and Yahya turn in believable performances. Frankly, everyone does well in “Candyman,” despite some writing and plot misgivings.

It’s here in the writing where things start to derail a bit for “Candyman.” There are still some really good plot points and story elements that work really well, and others that not only fall flat but feel as though they were a part of an earlier draft that made its way into the final product without context. Where “Candyman” struggles is deciding which kind of story it wants to be: is it a direct sequel that is simply expanding on the existing lore? Or it is loosely connected sequel that’s attempting to reinvent the lore altogether? The problem with “Candyman” is it never really makes a decision or seek to provide an answer, its end goal essentially wanting to be both but not really justifying one or the other to coexist. Where my own conflicting emotions come in is that I genuinely like both stories being told here, I just don’t like them together. “Candyman” connecting itself to the sequel is great, and if you’ve just recently watched the original the easter eggs and connective tissue is endless and satisfying. I also like the new path the film tries to take. It adds new elements to the lore of Candyman, eliminating the “is he real or not” mentality of its predecessor and transforming the myth into the spiritual manifestation of black pain and suffering.

What “Candyman” fails or struggles to do is make these two storylines converge into any kind of cohesive narrative. One resolution in one story leaves a gaping plot hole in the other, making the third act feel rushed, abrupt and underwhelming. I know that balance in films are tricky, but “Candyman” is frustrating because for most of its short runtime it shows all the potential of being able to pull it off. I even get what they were trying to do, but even though I can comprehend it in the abstract, I can’t say that the full execution of what’s being done here in “Candyman” works or pays off. Actually, MOST things here in “Candyman” don’t really pay off, especially when it all comes to its final conclusion. We know that the film can be great, so it’s all the more disappointing when it turns out to not be.

It’s hard to really get into just how much these two stories conflict with each other without getting into “Candyman” spoilers, so I won’t continue to harp on these flaws too much longer. What I will say is that this plus some strange editing choices force the film to struggle to make sense at times but also disguise their social commentary. Don’t get me wrong, there are countless discussions about gentrification, racial inequality, centuries of black pain and trauma, police brutality, artistic expressions and black exploitation. But because the film is so scattered and sprawling in its narrative, it doesn’t quite take the necessary time to really make these things feels organic and purposeful. Most of them simply come off incredibly heavy handed, and even in the context of “Candyman” seem more like an outsider explaining what happens when you have white cops in black neighborhoods than someone trying to convey the pain and suffering and consequences of that experience. There’s no complexity to some of these very complex social issues, so instead of really getting into what an overly policed projects looks and feels like for everyone involved. The brief interactions with police paint them as evil, stereotypical movie cops rather than characterizing them within the framework of the social commentary it’s hoping to express.

The editing only exacerbates these glaring narrative issues, with “Candyman” abruptly cutting back and forth from scene to scene through very misplaced flashbacks. There are least two or three flashbacks that not only feeling strangely misplaced and out of left field, but their inclusion never has a legitimate payoff. There’s at least one that took me the majority of the film to understand what it actually was and who it was for, and that one never has any impact or pay off on the overall events of “Candyman.” Again, it feels like spare parts from early draft that somehow found their way here. This is one of those rare instances where the film could actually benefit from a little bit more, cutting some of the fat and adding in more relevant narrative puzzle pieces. You know I’m a huge advocate from eliminating the 2 hour standard for movies, but “Candyman” could do without the flashbacks and add a good 15-20 minutes of purpose and meaning.

There’s a lot to enjoy here, and Nia DaCosta proves that she is more than capable of handling big budget films despite her very young career in the director’s chair. “Candyman” is a good movie, a worthy addition to the overall lore and a solid follow up to the original. But “Candyman” could be better, and due to some narrative imbalances, flawed writing, and strange editing choices it doesn’t quite cross the line into greatness.

No, I will NOT be saying his name in the mirror 5 times. To quote “Candyman” itself, ‘”black people don’t need to be summoning shit.”

“Candyman” is currently playing in theaters.