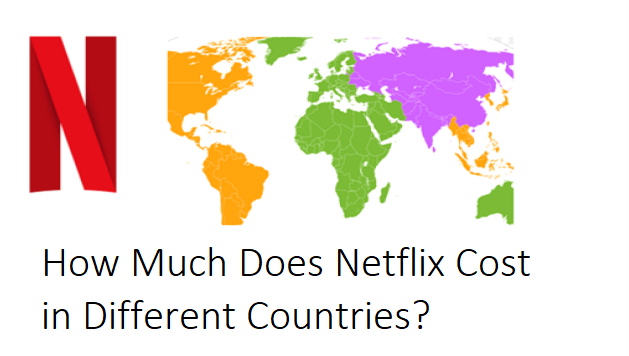 How Much Does Netflix Cost in Different Countries?

Netflix is one of the most successful online video streaming platforms. The service is available in more than 190 countries worldwide. Its library of TV shows and movies varies and expands depending upon the region or country.

Although it is a paid service, it still has a huge fan following with billions of active users worldwide. However, Netflix’s pricing policies and structure are different in each country. There are some countries that pay more while others enjoy Netflix content for lower prices.

Therefore, you should take advantage of technology to avail cheaper subscriptions and access the global content. Despite living anywhere in the world, you can buy Netflix cheaper plans with a geo-spoofing technique. Here is the pricing comparison for Netflix’s basic, standard, and premium subscriptions.

How Much Does Netflix Cost in Canada?

The Canadian library is one of the best demanded Netflix libraries that offers more than 5,400 titles for watching TV shows and movies. If you are interested to know more about Netflix Canada plans, scroll down for updated information on the current pricing:

You can stream the entire Netflix library for watching TV shows, movies, Netflix originals at $9.99/month on a basic subscription.

It is one of the most convenient packages at $14.99/month offered by Netflix where you can watch unlimited movies and TV shows with Netflix original productions.

If you are the one who only needs one screen license to access all TV shows and movies then following is a comparison of the best countries to reap the best value out of Netflix basic subscription from international regions.

Netflix users demand two screens for viewing TV shows and movies; the standard plan is a suitable plan for such viewers while others are looking for more than two screens. In such a case, the premium subscription is a perfect match for these members that allow watching from four screens.

How to Buy a Cheaper Netflix Subscription?

Binge-watchers can use a simple geo-spoofing tool like the VPN service to buy a cheaper Netflix subscription. All they need is to connect their VPN server to a country where Netflix costs less and buy a suitable plan.

After that, they can change their Netflix region to access other international Netflix libraries like American Netflix, Canadian library, UK Netflix, Japanese Netflix, and others. Here are the simple steps of instructions in 2021 to purchase and watch any Netflix library from anywhere in the world.

Once you have purchased the Netflix service, you can switch your Netflix region any time to enjoy a different version of Netflix for mixed TV shows and movies. Here are a few best regions for an unforgettable binge-watch session.

Netflix offers different content and pricing in each country in the world. Therefore, binge-watchers can take advantage of such policies to get most out of the Netflix service, whether that be subscribing for a cheaper Netflix subscription or unblocking a different library altogether!

Here’s How Your Printer Should Be Properly Recycled