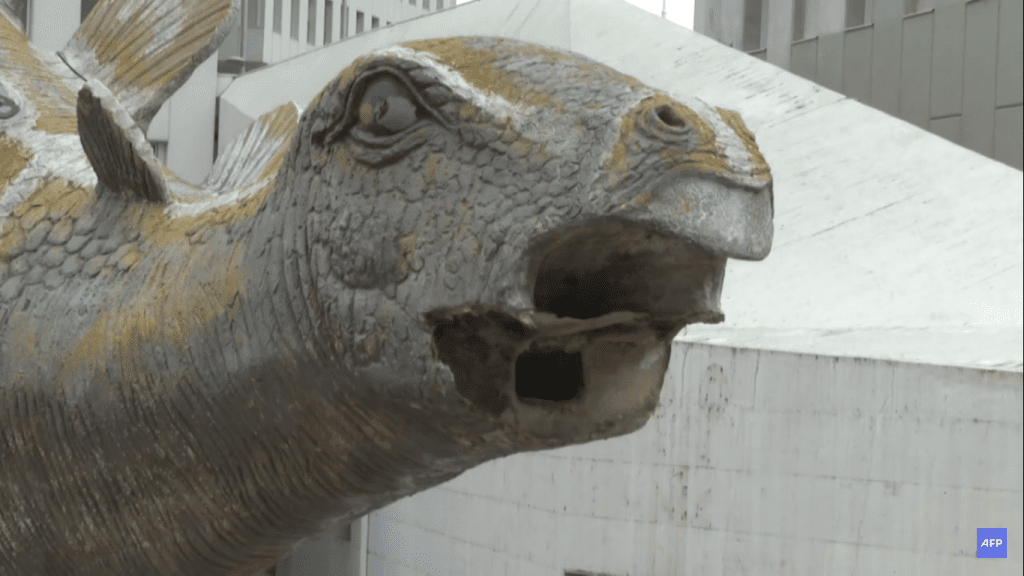 In the suburb of Santa Coloma de Gramenet outside the city of Barcelona, Spain, there were a number of papier-mâché statues built as a means of promoting a local theater (that’s now closed). Only a stegosaurus remains, and has bizarrely turned out to be a death trap.

On March 22nd, a 39-year-old man was found deceased, inside one of the legs of the dinosaur. The man’s body was spotted by a father and son who noticed the man via a crack in the statue. Authorities were contacted and excavation of the man’s body was performed. According to Newsweek, several firefighters responded to the call and had to saw away a section of the statue.

The man had been missing for two days, and had been reported to the police as such only a couple of hours beforehand by his family. The exact cause of death is still unknown, but authorities have stated at the time that there is no suspicion of foul play. They believe the man dropped his phone inside the dinosaur, crawled in after it, and became stuck after falling into an upside-down position.

Granted we don’t know all the details, but there are a number of questions that this leaves up in the air. Firstly, how does one drop or lose their cellphone into the innards of a statue? That’s not to say it couldn’t happen, but if you look at the statue, it doesn’t seem like there’s a visible point of where you could just naturally drop your phone in. Additionally, where’s the point of entry to where you’d be able to crawl in head-first and get stuck?

It seems like there’s some information we don’t know yet about what happened. Without being able to see the top of the dinosaur, it can’t be ruled out that’s where the point of entry was. If the man had scaled the dinosaur, dropped the phone through a hole there and tried to climb in after it, that could explain the situation and the resulting tragedy. Without an autopsy, it’s unknown how long the body had been in the statue, but there’s nothing to indicate that there’s anything off about the time frame of the man having been missing for two days.

With a death as strange as this it’s easy to speculate and joke about the relative absurdity of it all but a man is still dead and a family is in mourning. Our hearts go out to them and if any more details become public regarding the circumstances surrounding this bizarre tragedy, we’ll be sure to provide an update.

In a twisted way, it just goes to show how dinosaurs and humanity were never meant to coexist. Then again, the stegosaurus is said to be an herbivore, so devouring a human wouldn’t make much sense for it. But if death is to come to us all, not many of us can say we left this mortal coil the same way as Captain Hook did in the movie “Hook.” The moral of the story: stay away from reptilian statues.