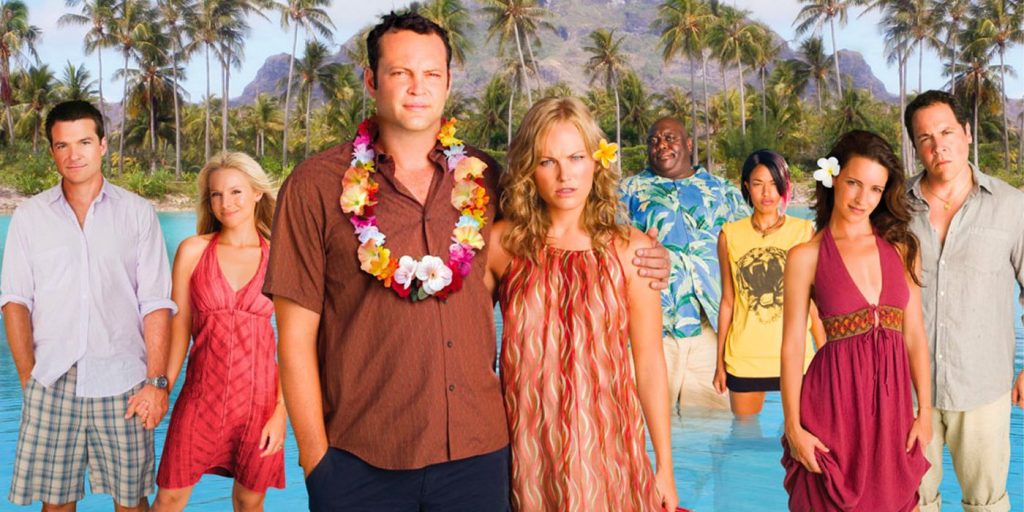 Most major Hollywood studios operate under a very simple formula: fill your movie with sure fire box office stars and the rest will work itself out. That’s most certainly the case with “Couples Retreat” (2009), which fills the entire cast with recognizable faces almost to intentionally distract viewers from any directorial or writing shortcomings it may or may not have.

What occurs here is a strange brew of box office success from the drawing power of its cast smashed up against abysmal reviews, hence the reason it makes the series. This mixture poses some unique questions in addition to whether or not it deserves its low rating, and sets “Couples Retreat” a part from other films we’ve looked at so far.

For starters, how the film was marketed and what it actually is (or wants to be) differ greatly from what it actually is. “Couples Retreat” was marketed as a typical Vince Vaughn, Jon Favreau buddy comedy, packed with borderline slapstick antics and fast talking line delivery the pair (most certainly Vaughn) was known for. All of these things make for a typical romantic comedy which is the genre “Couples Retreat” is classified as. The problem is, this is both true and untrue, as the film consistently struggles with trying to be exactly what we should expect while also feeling more like a dramedy than the outright formulaic silliness of a Lifetime Christmas in July film.

What makes “Couples Retreat” even more confusing and difficult to rate is that it actually does both relatively well. The actors are doing exactly what we expect them to, from Vaughn to Jason Bateman to Kristen Bell to Faizon Love (and also that poster lawsuit). Seriously, the cast is jam packed with stars and recognizable names it almost feels like overkill. All of them are both perfectly romantic comedy and perfectly dramedy. The problem is that “Couples Retreat” consistently switches between both without warning or purpose, causing viewers to remain unsure just what they’re suppose to be watching. You find yourself just wanting the film to commit to one or the other, because either would be better than trying to do both at the same time. “Couples Retreat” feels like mismatched halves of two different films that happen to have the same faces.

Most of this blame has to be put on first time director Peter Billingsley and the script, which is shockingly written by Vince Vaughn and Jon Favreau. Ya, I know. I was surprised when I discovered that one too, as they are both generally skilled with the pen together. Billingsley can’t seem bring the two competing films together in any kind of cohesive narrative, and the script by Vaughn and Favareu seems a little too ambitious even for them. This is stranger still when you consider that the base narrative and albeit formulaic story shouldn’t be something the duo is incapable of writing. Both in front and behind the camera, the pair have proven they understand both romcom and dramedy, having successfully pulled off both apart and better.

For all of this, it’s hard to really pinpoint where “Couples Retreat” goes so wrong to warrant such a low rating. I’m inclined to agree with the general critical consensus in that “Couples Retreat” is largely forgettable and generally poorly executed, but it’s also not all that unpleasant either. I’ve seen far worse films in both genres rated much higher, and while I’m in agreement with the criticism that the film certainly deserves, I’m not entirely sure it deserves to be at the bottom of the barrel of Rotten Tomatoes. Remember, one of the criteria for deciding if a film deserves its low rating is whether or not it’s fixable, and “Couples Retreat” is surprisingly easy to fix.

In all fairness, the fix for “Couples Retreat” wouldn’t necessarily make the film a blockbuster (despite it doing really well at the box office with a haul of $171 million against a $58 million budget), and it probably wouldn’t put the film into the certified fresh category. But it WOULD make a case for being a much better film all around, and the fix is simple: pick a genre and stick with it. You’re either full on romantic comedy or a dramedy about the struggles and difficulties of marriage. It doesn’t matter which one the film opts to go with, just that it picks one and commits to it all the way through to the end. There are some genuine funny moments (mainly from Vaughn) and some generally heartfelt moments and some solid questions about relationships, but none of them are ever fully explored which in turn makes all of them narratively disconnected and ineffective.

So what do we do with “Couples Retreat?” Well, since the film is rather easily fixable and actually has enjoyable moments, I think my final verdict has to lean towards not deserving it’s 10% rating. It’s not a good film, but it’s nowhere near its counterparts with similar ratings. It’s not really even my kind of film, as the romcom genre is one of my least favorite. But that doesn’t mean I can’t recognize films that do their genre well, and while “Couples Retreat” struggles with its identity, it’s not the worse by far even if it’s also not the best within its own genre.

Can the stars do better? Of course. Could the film bet better? Absolutely. But does “Couples Retreat” deserve 10% on Rotten Tomatoes?

Final Verdict: Does Not Deserve it