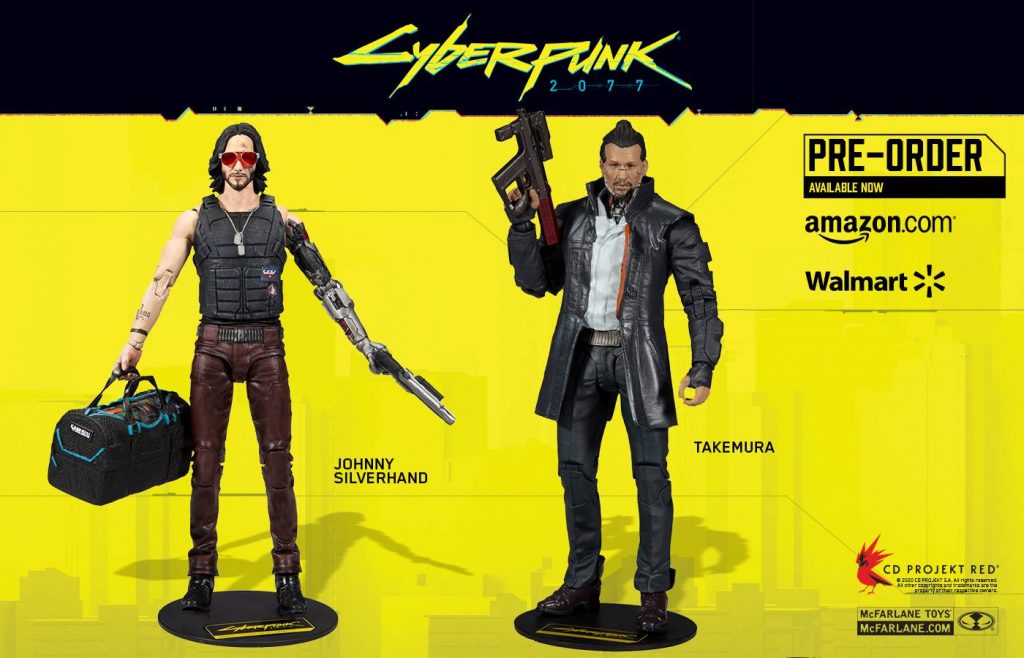 Ahead of the November 19th release of CD PROJEKT RED’s futuristic open world epic RPG Cyberpunk 2077, McFarlane Toys has announced the details for the expanded collection including a Takemura and another Johnny Silverhand. As one of the most anticipated upcoming games of the year, expectations for the toy line are high, and McFarlane doesn’t appear to disappoint.

Both figures will feature McFarlane’s signature Ultra Articulation, having 22 moving parts and come complete with a Cyberpunk 2077 branded base.

Takemura’s very intriguing sculpt shows off a gruff, battle-scarred face and some type of mechanical enhancements snaking down his neck and chest. His leather-look overcoat appears to be crafted from flexible vinyl and has a slightly armored look. Preview images show off some incredibly dynamic action poses. You can pre-order Takemura here.

Johnny Silverhand is inspired by Keanu Reeves, who also plays the character and this sculpt features Johnny in his signature bulletproof vest, dog tags and cool futuristic red sunglasses. With this new figure, we also get a great look at Johnny’s impressive cybernetic arm. Johnny’s accessories include a Malorian Gun and black duffle bag containing an atomic bomb. While the 12-inch Johnny gave us a peek at the personality the character will have, this Johnny might be giving us a look at what the game itself holds in store for us. And it all looks super exciting!

Takemura and Johnny will be available at all major retailers including Walmart, Target, GameStop, BestBuy and Walgreens. Takemura is available for pre-order on Amazon now.

Johnny will available in stores in September.