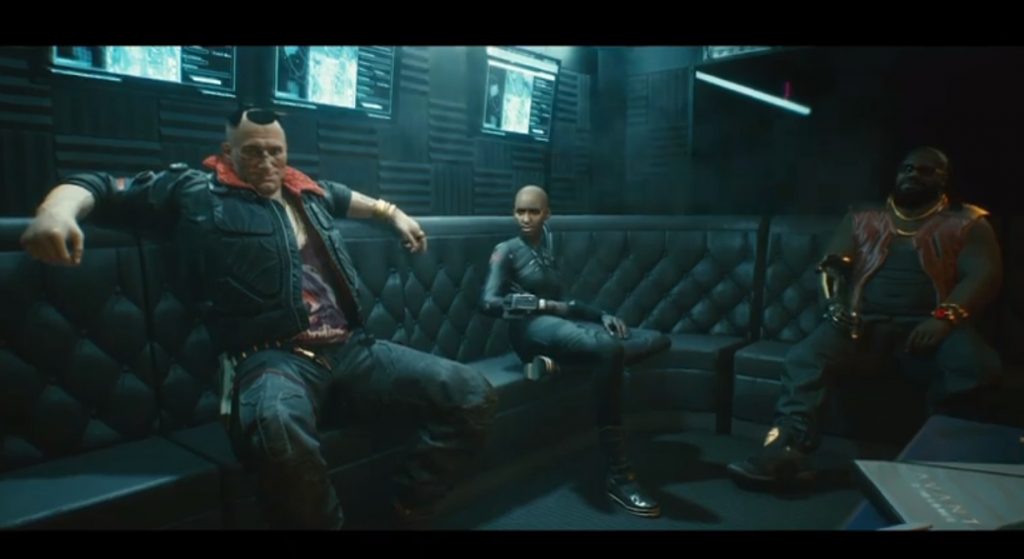 The livestream begins with Hollie Bennett, Head of Communications, breaking down what the livestream will cover. We see a new trailer for “Cyberpunk 2077” consisting entirely of scenes from the prologue of the game. There’s night clubs, plans for a heist, a gigantic cyborg and tons of violence. Pawek Sasko, Lead Quest Designer, comes into the livestream to break down what we see in the trailer. The world of Night City consists of six completely unique districts surrounded by a seventh district called the Badlands. These Badlands are a dead, dried-out space that you can traverse with a motorcycle or car.

Sasko explains that during the prologue you are playing as a character meeting up with your friend Jackie. Together you are trying to get your hands on the chip of immortality. To do so, you reach out to a man named Dexter DeShawn. Dexter provides you with contracts and jobs that give you cash. You can then use this cash to modify your body and obtain the materials necessary to get the chip of immortality. Of course, nothing goes as planned though.

Sasko also briefly explains Ripperdocs and how they replace your limbs with superior metal ones. Some of these surgeons will serve as important characters in the story. He also gives us the name of the giant cyborg we see in the trailer-Adam Smasher. We also get a look at the Mox gang who protect sex workers from harassment and abuse.

After Sasko’s explanations, Hollie returns to confirm that “Cyberpunk 2077” will offer a free upgrade to the next gen consoles for both PlayStation and Xbox. She then reveals the company’s secret project, a collaborative project with both Netflix and studio Trigger. It’s an anime called “Cyberpunk Edgerunners” and it will offer us a new story and characters set in the world of Night City. “Cyberpunk Edgerunners” will launch in 2022.

Now we turn our attention to a unique feature in Cyberpunk-braindance. Braindance is “essentially a recording of someone else’s experience.” You can see, hear, smell and feel just like they did. In the sample clip, we see your character using braindance to relive the experience of someone robbing a store. Once in editing mode, you can fast forward, pause and rewind the scene. You can also analyze various things and hone in on sound signatures. Using all of the available features, your character discovers that the robber was shot by his own partner.

Sasko returns alongside Senior Quest Designer Patrick Mills to explain braindance. Mills explains how the lore of braindance places its inception in the early 2000s. While originally used for therapy and prisoner rehabilitation, it’s not used commonly by media. In the game, you will use braindance often to uncover mysteries and investigate various things. It allows the player to see things happening in the periphery to get a better understanding of the whole.

Finally, the team briefly discusses what they are most excited about in “Cyberpunk 2077.” Media hands-on impressions of the beginning of the game are available online right now. We should expect the next Night City Wire livestream in a few weeks. You can watch the entire livestream below.