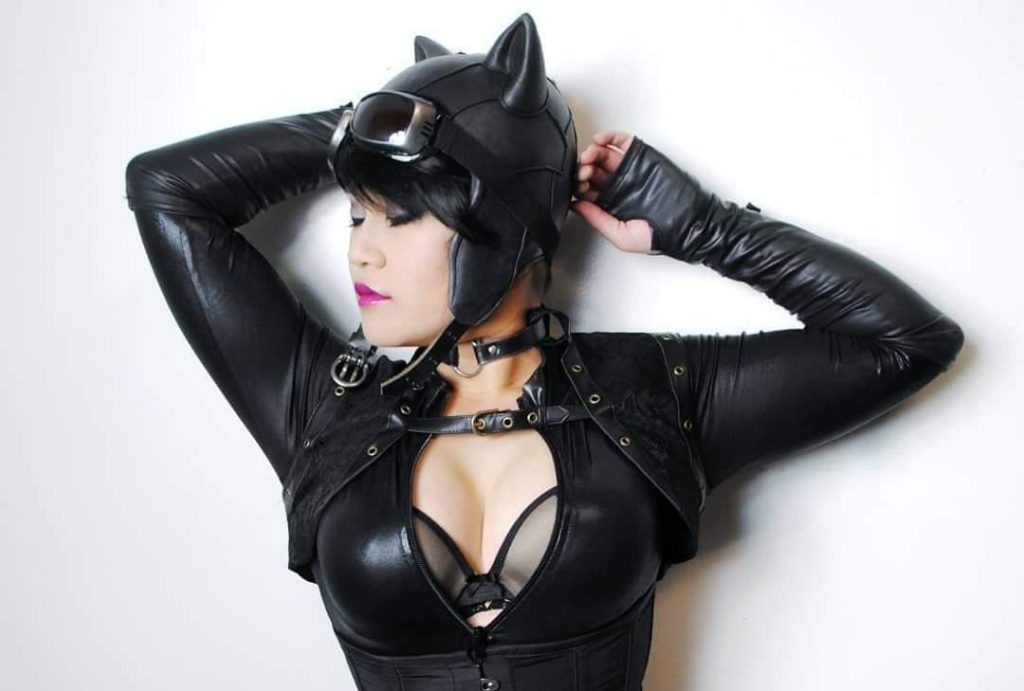 Here at Nerdbot we have a group of beautiful women who love showing their geeky side with cosplay variants. Some have come and gone, some have been around since day one, some are new but known. These girls are the Nerdplay Girls (formerly Nerdbot Girls). Allow me to start off with Ada Mist!

Hi, everyone! My name is Ada Mist. You may have seen me or have met me in my most well known costume as Catwoman at various nerdy venues. If not, you might know me for my silly quick drawings on Nerdbot Media’s livestream show Nerdplay Girls Draw with none other than Nerdplay Girls! When I am not drawing or parading around in fake leather and heels you will most likely find me relaxing at home barefoot and wearing pajamas.

What made you start cosplaying and how long have you been doing it?

I started cosplaying in 2006 and was pretty consistent. During this time I was also getting into comic books. The idea of cosplaying sparked while I was reading Identity Crisis and some suggested I should try and cosplay as the powerful sorceress Zatanna. At first I was hesitant. I didn’t know what cosplay was and had absolutely no clue where to start with creating a costume.

Did I need to go buy one at a costume shop? Was it something I could easily create with what I had in my closet? Was I ready or comfortable with the whole cosplay process? Do I even like being out in public and getting an enormous amount of attention?

Mind you back then I didn’t like socializing or being in areas with large crowds of people. I was very much a stay at home and relax [person]. But I got over all of those fears and did what came to be naturally: get creative. I researched and found photos of Zatanna iconic tuxedo magician attire to figure out what I needed. Found the [pieces] at a costume store and lingerie store (this is where my fascination with corsets started, too). I literally was walking around in underwear in public. It was a bit daunting at the beginning but when I saw that there were others in costume I didn’t feel as nervous. And getting stopped for photos like I was on the red carpet was thrilling. Never would I ever imagine wanting to have so much attention directed at me. It was a great feeling and I loved it.

Tell me about the con-going experience. The positives, the negatives, where have you been, etc.

The positives: meeting people from different cities/countries sharing the same likes and fandoms, taking photos in your crafted costumes and wearing those proudly among crowds of people, and meeting famous personalities or figures in the industry is a major plus.

The negatives: long nights prepping, creating a costume hoping it will turn out exactly how you want it to be (and it doesn’t), wearing a costume you created and getting [criticized] by someone who is knowledgeable of the character telling you everything about the costume is wrong, not feeling confident in your costume when you see others wearing their costumes, aching feet, itchy scalp from wigs… more achy feet.

Was there ever a cosplay you worked on that did not turn out how you wanted? What did you do?

I created an Ame-Comi Big Barda costume for a costume contest as a way to keep myself occupied while – at the time – unemployed. I felt really depressed that I couldn’t do as much like I wanted to do since my funds were very tight but when I heard about this costume contest I thought, “oh why the heck not” and did it. It was fun getting crafty with scrap materials from other projects and really immersing myself into making a costume. Everything I loved about making the costume was exciting but when it came to wearing it…well, it didn’t look as good as I anticipated it being.

It was bulky, some of the pieces fell off because of the material stretching, and I was exposing a lot of skin that I didn’t really intend to show off. It was a week before the costume contest and I almost gave up and tossed everything into the trash. But I shared my costume progress on social media and people were excited to see the costume in person. I told myself, “Hey, you spent weeks and long nights putting this together. Are you going to give up that easily?” The night of the costume contest I psyched myself out, took a deep breath, put all those costume pieces together and walked into that venue like I was meant to be there.

It was a blast. I had a great time. I didn’t receive any honorable mentions but walking on that stage to present my costume to the judges was a new experience. Overall, I made that costume work and once the event was over the entire thing fell apart. I guess you can say that it fulfilled its purpose?

What are your top 3 costumes and why?

Catwoman. The moment I slip into that suit I feel like a completely different person. I feel strong, powerful. I even have a different strut when I am around people when I wear that suit and people love it. Catwoman is probably my favorite because I have made modifications to the suit over several years making the costume my own. My costume is an homage to everything that is sexy, fierce, and adventurous about the character.

Zatanna. She was the first character I created a costume for and holds a special place in my heart. Just like Zatanna I made modifications to the suits I wear and made them my own. I love the smiles I put on people’s faces, especially young children who have believed I was that character. Seeing those smiles and cheery reactions is the best.

Black Cat. Black Cat is the first Marvel costume I have worn as well as the first time I did boudoir. A Lot of people who followed me as Catwoman really liked my take on Black Cat.

Yes, I would come across people who would approach me and tell me that “so and so” isn’t Asian or “so and so” doesn’t have brown eyes, they are (whatever color they are in the comic books). It never really dawned on me that my ethnicity would be some sort of difficult challenge for others to accept when I would cosplay as specific characters. Either I’m too tan, not pale enough, or simply not enough or not that specific ethnicity I am supposed to portray. I really do not let that get to me (and it still doesn’t) but it is odd that it does for others.

I would encourage cosplayers or future cosplayers to be whoever they want. Skin color or ethnicity should not stop anyone from dressing up as their favorite character. If I want to be Wonder Woman I will wear that costume proudly. If I want to dress as Moana I will wear my costume because it makes me feel strong. If I want to be Catwoman I am gonna strut like it’s no one’s business. You put time and effort into making those costumes and to show everyone how much you admire that character you are trying to portray.

Everything will be in progression. I have seen progression with characters being worn by everyone and it is great to see people having fun being their favorite characters.