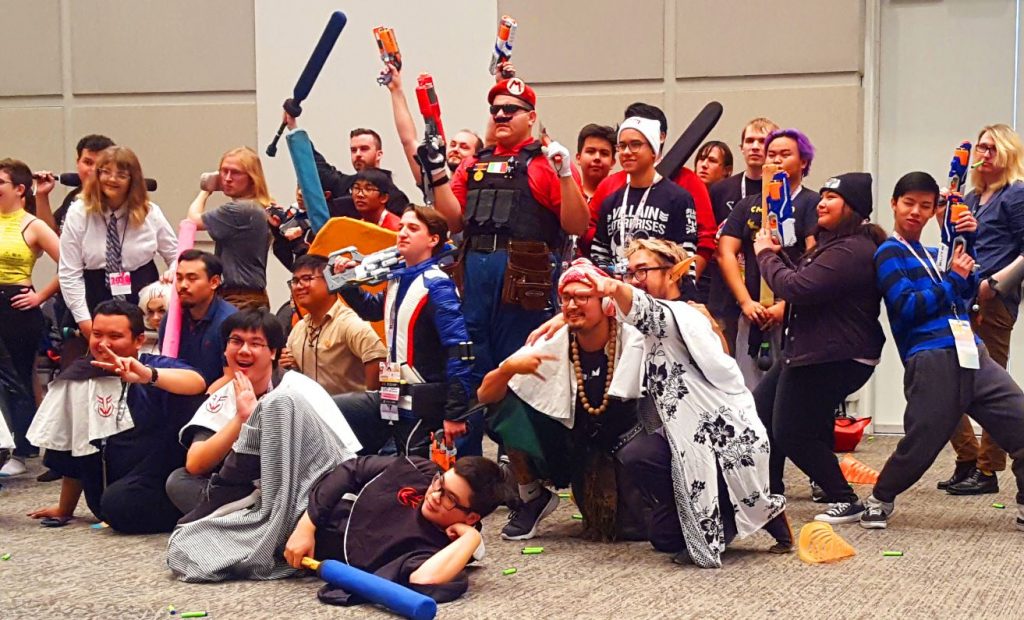 Unlimited Foam Works hosted an event at this year’s Anime Los Angeles featuring a battle of foam weaponry.  Dozens of attendees showed up to compete in themed team battles against each other, and everyone had an exciting time of it.

The weapons available for both teams were an array of NERF pistols, a bundle of foam swords, and even giant foam shields.  Scattered about the “arena” were bright green NERF bullets for anyone to pick up and reload with.

The battles started with a warmup so that competitors could get used to the rules as well as get their muscles ready.  Most chose pistols and shot at each other from afar, but there were a select few fighters who chose to get close with sword and shield.  If players were hit, they ran back to a host standing as a “respawn point”, and could get back into the fray. The respawn hosts counted how many times they had to respawn someone, and in the end these points would determine which side had more deaths.  The side with the lesser amount of respawns was the winning side, and after fifteen minutes of warming up, the score was 102-84.

Teams were changed up each new round.  Overall rules included no face shots, no punching or kicking, and no dual-wielding.

After the warmup, the real games began.  If fighters were hit in the arm or leg, they could not use that limb; if two limbs were hit, they were considered dead and needed to respawn; torso shots also counted as death.  This game otherwise went relatively similar to the last game, but players were given more chances to fight after being hit.

The next game featured a healer in the fray for each team.  Hilariously, some contestants began jokingly shouting “I need a heal” to the healers in an Overwatch fashion.  Another rule implemented was having to keep moving while reloading. At some point, one side formed a shield wall, showing that the members of the teams were working well together to overcome their opponents.  This battle ended 45-43.

The third game was based off of an Overwatch battle type called “Payload”.  This featured some sort of escort in the middle; a host with a wagon that could be directed by one team back to a winning zone.  The players could be revived, but respawn would take 10 seconds and they’d have to form a line if there was more than one getting healed.  They also added a “mega gun” to this battle; a designated player on each team would wield this, and shots from the weapon caused instant death and could break a shield, which would require going to the respawn point to reactivate.  The struggle was real as both teams did a great job of trying to move the “payload” their way, and one team nearly got theirs all the way before they were overtaken. One very memorable moment was when one of the hosts picked up a shield that had the Super Smash Bros logo painted on, calling out “The Smash Ball is in play!”  Players ran over to it and started hitting it until someone “broke” it and was given a power up.

The final battle got more difficult.  There were no healers or respawns, and each team had the same amount of “shields” to protect a designated player.  As things got rough, both teams formed into tight-knit groups facing each other. One side was calling out coordinated orders while the other remained in place figuring out a strategy.  As it turned out, they were actually planning to overrun the other shields, and eventually pulled it off, charging when they were not expecting it. Eventually, all of the players on one side were defeated, leaving the other victorious.

In the end, everyone had a great time regardless of wins or losses.