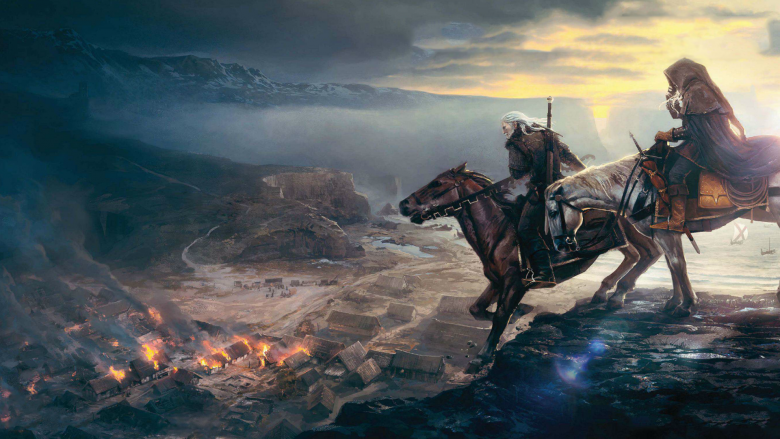 6 Literature Based Games That Are Worth A Play

Quite often, games are novelized. This we know, but what about novels which are turned into games? You would be surprised how many there are. Part of the problem with the assumption that not many video games might be based on books, is the reputation video games have for being juvenile and thoughtless, and mostly entertainment for children.

While there are a good number of games that count as the media version of empty calories, there are also lots of great video games based on interesting books, from The Lord of The Rings to Atlas Shrugged, using them as a springboard to explore complicated concepts. Here are some pretty good ones, some of which you might be surprised to learn about.

One of the most celebrated open-world games of the 2010s was The Witcher 3. However, did you know that it was actually based on a series of novels? The books, known simply as The Witcher Series by Andrzej Sapkowski, are centered on the life of Geralt of Rivia, a huntsman who specializes in monsters and has supernatural powers.

In the books, the story is already written, but in the games, you, the player, get to make decisions on behalf of Geralt.

This isn’t just another fantasy book. It is a matter of great pride in Poland, where the author is from. In fact, the Polish are so proud of this series that the former Polish Prime Minister gifted former US President Barack Obama a copy of The Witcher 2: Assassins of Kings back in 2011.

Now this isn’t a direct adaptation but does show a lot of similarities to a book of old. If you’ve played Assassin’s Creed, then you are probably familiar with the line that reads “Nothing is true, everything is permitted”. This is eerily similar to a line from the 1938 Slovenian novel Alamut which reads “Nothing is an absolute reality, all is permitted”.

The line isn’t the only thing that the artistic works of creation share. The very first Assassin’s Creed has many of the same themes as Alamut. It even has the same criticisms of the manipulative tendencies of fascistic leaders when getting people to follow them. There is a deep dive into the relationship between the two works of art in this article by Michelle Ehrhardt.

Bioshock isn’t exactly based on any particular book. It is, however, based on the ideas of a certain author who wrote a few interesting books: Ayn Rand.

Bioshock is a colorful critique of Ayn Rand’s ideas, as expressed in her written works. Ayn Rand advocated for something called objectivist philosophy: a socio-economic and political system in which everybody pursues their own interests and nobody owes anyone anything. As a consequence, everybody would be completely responsible for their own well-being.

I used to love reading Ayn Rand in my assignment writing days. Her works are a great study in lucid, evocative essay writing that can make anyone a writer. Though I’m not sure all of her ideas are applicable in a practical setting.

The essence of the game is to critique Rand’s ideas by showing what a society that subscribed to her philosophy would look like, especially if her ideas were taken their logical extreme.

This is a little different from the other games on this list in that it’s really old. The Dark Eye is a 1995 video game. However, it also explores the literary works of yet another famous author: Edgar Allan Poe. It looks at 3 of Poe’s most famous stories: Berenice, Amontillado, and The Tell-Tale Heart from many different perspectives.

Most of the horror element in this game comes from its uncanny visual style. The characters are Claymation and the backdrops are pre-rendered CGI, giving a certain realness to it, especially when you consider the condition of 90s graphics.

There is also voice acting by William S. Burroughs, the author of Naked Lunch, which certainly adds to the eerie feel of it all. If you’re a die-hard Poe fan, then you should love this incredible visualization of some of his stories.

Bloodborne is yet another game that explores an author, rather than just a single one of their works. While Bioshock explores Ayn Rand’s ideas, Bloodborne explores those of H.P. Lovecraft.

When you first play Bloodborne, you might be forgiven for expecting the same old same old, such as witches, werewolves, and other forms of Gothic horror. However, prepare to be surprised by some of the eldritch gods and interdimensional cosmic entities you will encounter in this game.

I have to point out something here. Bloodborne actually isn’t the only game to explore Lovecraft and his works. Some other games include Amnesia: The Dark Descent, Alone in the Dark, Eternal Darkness, Prisoner of Ice, Scratches, Eldritch, The Last Door, and Call of Cthulhu.

The Binding of Isaac

The Binding of Isaac might be a little controversial, and some might not think it should be on this list. However, it is rooted in the most read book in the whole world: the Bible.

There are actually quite a few games based on different stories and elements of the Bible, but they’re usually either too poorly made, educations, or just plain weird. This one, at least, has enough production value to be a big hit.

The story is based on the Old Testament story of Isaac and Abraham, where God commanded Abraham to sacrifice his son Isaac as a way to prove his faith. In the game, however, there is no Abraham. In his place we have an abusive mother. There are also lots of other characters, bosses, and items in the game that are based on the Bible. It’s definitely a fun game with an interesting take on this age-old story.

These games represent just the tip of the iceberg. There are lots of other great games out there that are based on some pretty great books and authors. Hopefully, after trying out some of the titles on this list, you will find them to be enjoyable and seek out others of their kind.

Liam Catalan has been working as a self-employed copywriter offering professional writing services for 5 years. Also, he was an editor at the University of Melbourne newspaper. He is an expert on topics such as writing, gaming, traveling, and time management.

A Real Life Jurassic Park is Being Built