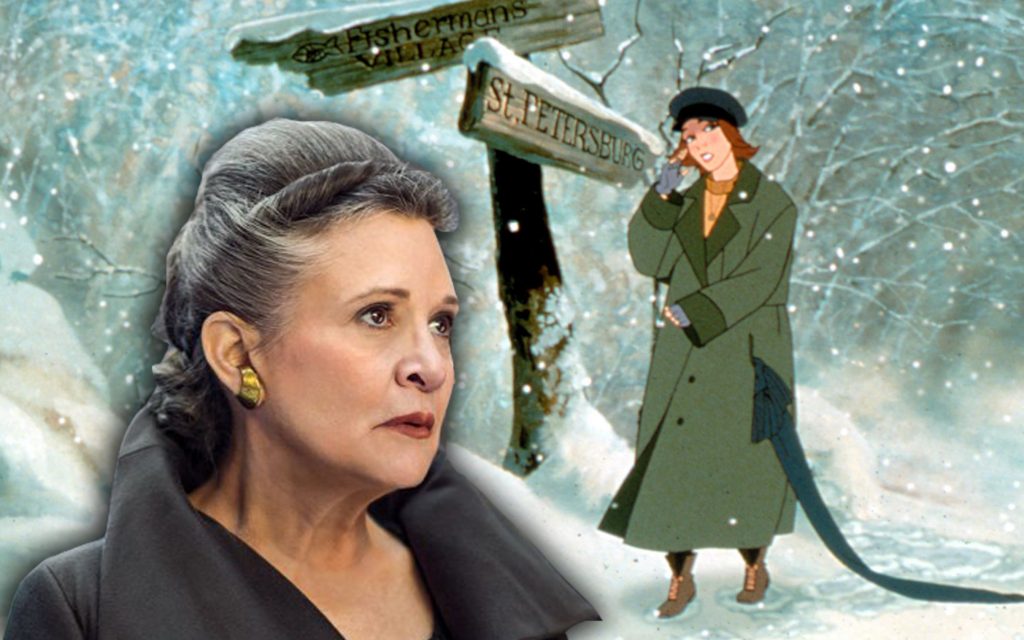 Carrie Fischer is still sorely missed. We’ll be able to see her onscreen as Princess Leia/General Organa one last time in the upcoming film this December. It will probably bring tears to our eyes but hopefully the movie will be a good end to her legacy in the Star Wars universe. She was a multi-talented individual and we’ve just found out that one of the most iconic scenes of the movie Anastasia was written by one of our very favorite (now Disney Princess) Carrie Fischer.

Flaherty in an interview with EW said, “Princess Leia wrote that scene. It was interesting because they really wanted to get into the psyche of Anya.”

You know the scene were talking about. She leaves the convent or wherever she was staying and then is faced with a choice with what direction she will go. It’s said that she pulled from her own experience of growing up and not knowing what direction her life would go when coming up with the scene. It all leads up to the famous song “Journey to the past”. “Heart don’t fail me now, Courage don’t desert me”. And I didn’t even have to look up the lyrics to that song because THAT’s how memorable it is.

EW has previously described the late actress as ” one of the most sought after doctors in town.” She would work on films without credit and enhance the script or write new scenes. She started Script doctoring after having to to adapt an interview she did with Esquire in 1985. She said it was a good job but not one she sought out. After that had kick started her career and got her known for that, she started writing some lines in Star Wars. Mostly thanks to Harrison Ford changing his lines. She said that him doing that “became annoying because it impacted my stuff.” She also would tell George Lucas that it’s easier to rewrite because you know what would “fit into your mouth dialogue wise… You can type this shit but you can’t say it.”