We WISH we were making this up, but this is completely a real thing that happened in...
Read more

A fun new rideable toy is coming for kids and kids at heart from Pokémon Air!
Read more

CBS All Access Streaming Service to become Paramount+ in 2021

It’s part video game, part The Walking Dead (well, minus the dead…), and a whole lot of classic sci-fi premise. 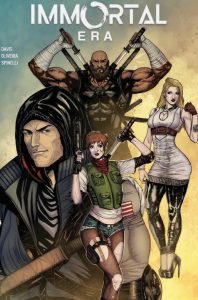 Edward Davis of Finish Line Comics is looking to start a new comic that might be a hit among indie fans who grew up with the 90’s aesthetic. That isn’t a knock, but it’s a feeling. Davis’ Immortal Era feels very 90’s in a fun way. Love cutting people apart? Love strong female characters? Love swords? 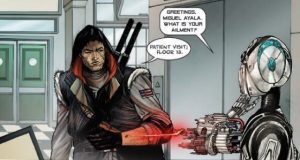 Check it out on Kickstarter.

The premise is simple: At some point people just stopped dying. As a result, there’s overpopulation and resources are being fought over. You’ve got your Haves and Have-Nots. But the kicker is people might not die but they aren’t Superman. You could lose a limb or, apparently, even your entire body. The brain seems to survive no matter what, a sort of zombie but alive… Or… 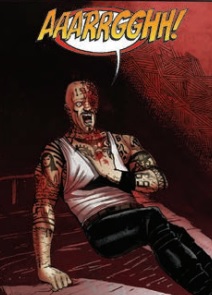 Davis is the creator/writer. He is joined by Cezar Oliveira on art and Viviana Spinelli on color and Manny Hernandez on letters. It isn’t perfect but it’s vivid and done well enough to want you to see where the story and art go. As I said, the entire thing is very video-gamey with action and character design. If you’ve been a fan of a lot of the modern survival-style games, this project could be for you.

This is a comic I can’t really give a score to. It’s a first issue preview I’ve seen for a Kickstarter on a project that is clearly a passion project. Check it out and decide for yourself if you like it or not. It isn’t as polished as a Marvel or DC comic, but clearly skill and dedication are at work for Immortal Era. It might be up your alley and your chance to start something that turns out into a fun, violent ride.

Do you have a favorite unknown or just starting comic book? Let Nerdbot know in the comments!

We are pleased to report that the Marvel Studios Disney+ live action series all about Kamala Khan, aka "Ms. Marvel" is getting...
Read more

We knew it was gonna happen eventually, and this morning the powers that be officially announced that DC Universe, streaming service of...
Read more

“The Falcon and The Winter Soldier” Courtesy of Sebastian Stan

While we're in a black hole of things to look forward to in the immediate future, it's heartening to know the Marvel...
Read more

Where Do Comic Publishers Stand with BLM Protesters?

Alongside individuals, industries have announced their support for BLM protesters; comics publishers and creators among them.
Read more

When it comes to comic book movie adaptations, it is clear that Marvel has the spotlight.
Read more

Daryl and Carol Getting Spinoff Series, “The Walking Dead” Done After 11 Seasons

This just in- (well, this was just in right before the "Dune" trailer hit, so you know we were focused on THAT)...
Read more

We're pretty excited to report that the much beloved Superman radio serials are making a comeback, thanks to someone at Warner Bros....
Read more

The digital comic book/manga site Comixology has just made over 200 issues of Marvel's Black Panther available for free!
Read more

We WISH we were making this up, but this is completely a real thing that happened in...
Read more
Html code here! Replace this with any non empty raw html code and that's it.
Anime

A fun new rideable toy is coming for kids and kids at heart from Pokémon Air!
Read more
Anime

If you've been anxiously awaited news of Disneyland in Anaheim, CA reopening, California Governor Gavin Newsom has some good news for you-...
Read more

With some 'select retailers' jumping the gun, pre orders for the Sony PlayStation 5 (PS5) have been damn-near impossible to get.
Read more

So....today was the Sony PlayStation 5 Showcase, and it went pretty well. So well in fact that online retailers WalMart and Game...
Read more