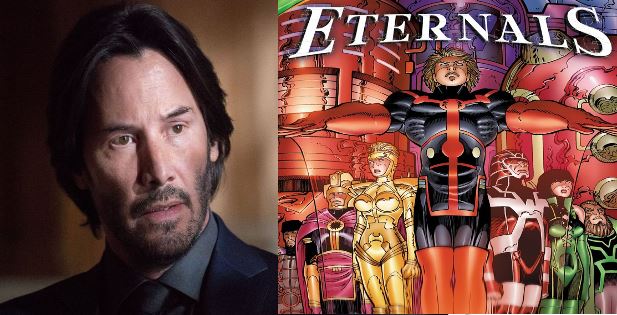 Is Keanu Reeves Joining the MCU in “The Eternals”?

Keanu Reeves has a lot going on. John Wick 3: Parabellum is in theaters now, and there will be a John Wick 4. Later this month Reeves will voice the character Duke Caboom in Toy Story 4. Production on Bill&Ted 3 will start soon. And there are rumors that Reeves will be appearing in the upcoming Fast and Furious spin-off Hobbs and Shaw. The Wachowskis are also rumored to be making a fourth Matrix movie, which would presumably include Reeves.

Now comes another rumor: that Reeves is in talks to join the cast of Marvel’s The Eternals. The cast for The Eternals already potentially includes Angelina Jolie, Kumail Nanjiani, Ma Dong-seok, and Richard Madden. Chloe Zao is directing from a script by Mathew and Ryan Firpo. Fans would be excited to see Reeves join the MCU. Previously he was rumored to be under consideration for the Yon-Rogg role in Captain Marvel but had to pass due to scheduling conflicts with John Wick 3. The role eventually went to Jude Law.

There is no information about what possible role Reeves might be considered for in The Eternals. But if talks fall through on that movie, Reeves had previously told Screen Geek that he would love to play Wolverine and has also said that he would love to reprise his role as Constantine so perhaps we might see him in some other MCU or DCEU role in the future. That is if one can be fit in with Reeves’ busy schedule.