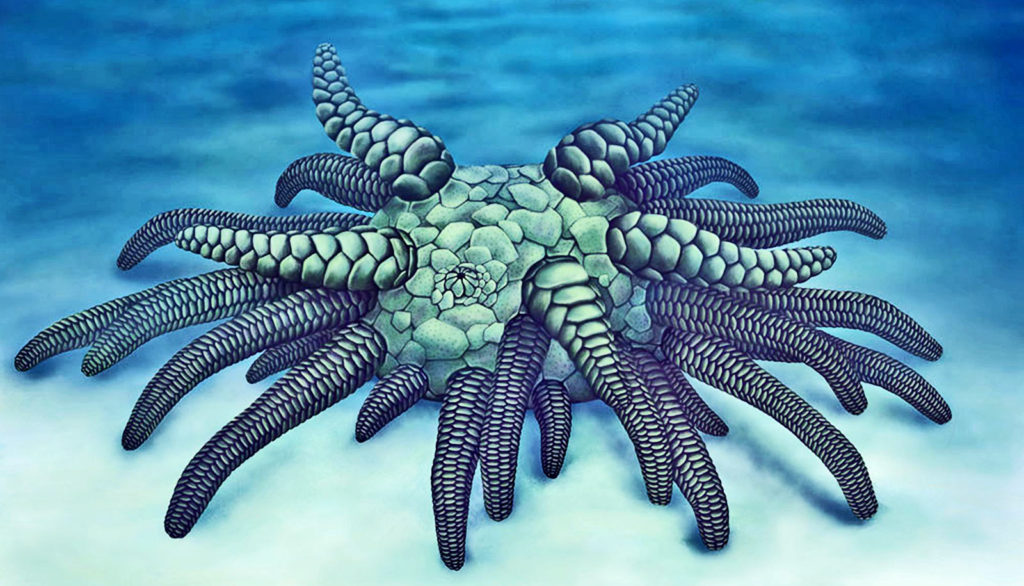 Cthulhu lives! Or at least something that looks like it did. Scientists in Herefordshire, Britain recently discovered the fossilized remains of a 430 million-year-old sea creature with tentacles longer than its body.

Scientists named the mysterious creature Sollasina cthulhu after H.P. Lovecraft’s sea beast. Sollasina was a type of sea cucumber with 45 tentacles it used to walk across the seafloor. In a University of Oxford article, the research shows that “although the fossil is just 3 [centimeters] wide, its many long tentacles would have made it appear quite monstrous to other small sea creatures alive at the time.” The article continues by saying that “it is thought that these tentacles, or ‘tube feet’, were used to capture food and crawl over the seafloor.”

Palaeontologists from the USA and the UK studied the creature by creating an accurate 3-D reconstruction of it. Like other fossils from Herefordshire, the fossil was gradually grinded away layer-by-layer, as photographs were taken at each stage. Hundreds of slice images were then digitally reconstructed to create the virtual fossil. This virtual image allowed the team of scientists to accurately research the internal and external construction of this ancient species. Dr. Imran Rahman, lead author, says:

“Sollasina belongs to an extinct group called the ophiocistioids, and this new material provides the first information on the group’s internal structures. This includes an inner ring-like form that has never been described in the group before. We interpret this as the first evidence of the soft parts of the water vascular system in ophiocistioids.”

The fossil slices and 3-D reconstruction can be seen at the Oxford University Museum of Natural History. All research was published in the scientific journal Proceedings of the Royal Society B. Thanks to science, we now have a sea cucumber as the ancestor to Lovecraft’s horrifying water beast.