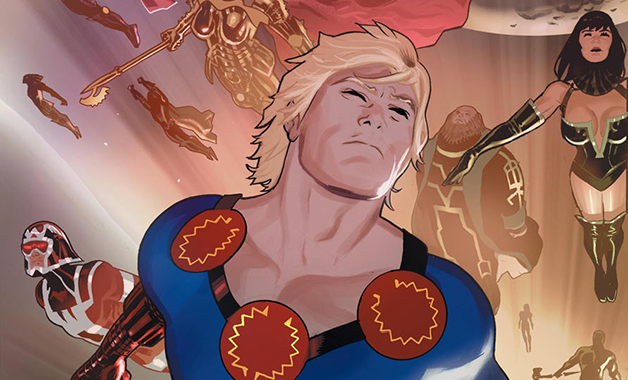 Kevin Feige Confirms an LGBT Hero is in the Cards

In a recent interview with ET, Kevin Feige confirmed that an LBGT character could be in the works sometime soon. ET’s John Boone asked him about the probability of four different concepts; and which one was closest to reality. The four options given were Kamala Khan in the MCU, a Nova movie, an LGBT superhero, or another Taika Waititi film.

“I think all of those are percolating and — let’s put it this way: They’re all percolating, I do want to keep the focus on this one and on the immediate future, but everything you just named are percolating, some closer than others.”

So while we don’t know specifically which one could be closest it does mean that Feige is open to the idea of an LGBT character taking the screen. Not too long ago they put out a casting call for Ikaris in The Eternals. Rumors about this movie is that it could be the one to break the ice on an LGBT Marvel Hero, while when I did some searching on wikipedia I could not find where it said he was ever gay. I did find something about Ikaris having a wife in one of the stories though.

Victoria Alonso, who is Marvel’s Production Chief also told Variety while on the red carpet for Captain Marvel that the world “is ready for that kind of representation.”

That could mean that we would see our first openly gay male super hero. With DC already writing and putting out an openly gay Batwoman series sometime this year, it could be a trend we can plan on seeing more of.

One character that is openly gay in the comics as of 2015 is Iceman. This could be a good character to feature as their fist LGBT hero and also tie in the X-Men into the current MCU.

Another character they could use is Northstar from the X-Men. He came out as openly gay in 1992 and had a wedding issue featuring his marriage to
Kyle Jinadu. It was the first same sex marriage ever in the world of comic books.

For the most part I do think the world is ready to see more LGBT representation in super hero movies. We have Wonder Woman who is Bi-sexual, though some think that this is outrageous. The truth of the matter is she is and was always bi, from WAY back in the comics. There are a few others who they could try something with, Loki is Bi in the comics, and Deadpool is Pansexual and has a crush on Spiderman. The fact of it is the comics are rich with a history that many people who only watch the movies don’t know about. And if they like these heroes they don’t care to know any further than what is shown onscreen. Marvel could do any number of things to make this happen and we need to be ready for it.

What do you think about a LGBT super hero in the Marvel Cinematic Universe? Tell us in the comics!