Now that the initial furore over the upcoming Lady Doctor has died down, the Beeb has seen fit to give the world a look at the official costume for the upcoming 14th Doctor. With that in mind NerdBot are taking a look back at some of the previous costumes of the 21st Century Doctors have worn and how they relate to their respective characters’ stories. What clues did they offer to us about their wearers and what do those ideas tell us about what might be in store for the next wielder of the sonic? 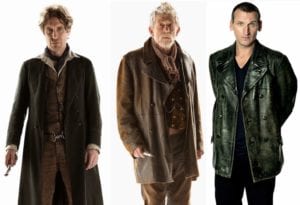 The ninth Doctor appeared to the world shortly after the events of the now infamous Time War, responsible for the disappearance of Gallifrey and the decimation of the Daleks. Leather clad and minimalist, this was a Doctor who had been through some stuff and had lost the taste for flamboyance that had brought us frilly shirts and vegetable accessories. When you look at where the Doctor started with the Time War however, there’s a clear design language in the costume choices that were made.

McGann is seen in darker, more hard-wearing garb than when he first appeared with his flowing hair and velvet jacket. Eccleston’s leathers likely informed the choices about his predecessors look in reality, while being informed by Eight and War within the story. A character who has spent so long dressing for practical reasons likely finds that habit hard to shake even when the war is over. Traumatized by the Time War it’s possible the Doctor latched onto his hardy leathers like a comfort blanket, keeping himself safe and shutting out a world that had driven him to the brink of self destruction.

With Eccleston’s passing, The Doctor seemed to be able to put greater distance between him and the traumas of his past. David Tenant introduced a still practical but infinitely less serious duo of sharp suits to the Doctor’s wardrobe. These were given an essence of fun with the inclusion of a trusty pair of Chucks and some glasses that he didn’t even need, only wearing them because he thought they made him look clever. One other interesting factoid about the Doctor’s signature suits was that, with a handful of exceptions, Tenant would wear his brown suit for any episodes that were set in the past and the blue suit for those in the future.

When discussing the 11th Doctor’s costume everyone’s thoughts head to the same place, because bow ties ARE cool. Steven Moffat had gone on record saying that his idea of the Doctor was more a kindly old professor than the cool-dude styling Tenant had brought to the show. Smith definitely brought a flavour of the eccentric old professor to the show with his tweed jacket and bow-tie, ironic given that he is still the youngest actor to ever portray the character, if you don’t count the flashbacks.

After the trauma of losing Amy, Smith’s Doctor took on a slightly darker look, with a more Victorian feel that echoed the look of Eight’s first appearance. This reflected the now more cynical outlook of the character, with a more cynical and cautious outlook after the lessons learned earlier in his life. This look only lasted for a single season however with Smith being replaced by Capaldi at the end of the year in ‘The Time of The Doctor’. 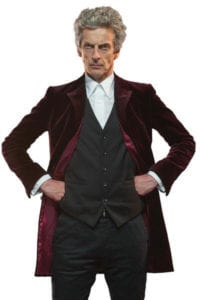 Ironically, with Smith being the youngest Doctor but bringing the personality of a much older man, Capaldi almost did the opposite. Starting out with a dark suit and black, red lined long coat the Doctor coupled this with some Dr Martens and the personality of a surly teenager. In later episodes this youthful personality was made even more overt when he began wearing a t-shirt and hoody combo under his jacket while rocking out with shades and an electric guitar. More recently we’ve seen echoes of the third Doctor with a red velvet jacket and bouffant hair. This is going to be a short lived look however, as well all now by now that the 13th Doctor is on her way. 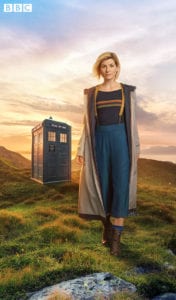 So, what about about Whittacker’s outfit? What does it tell us about what we can expect from the character? Well, there’s quite a bit of colour in there, albeit in a relatively understated way, with the soon to be signature striping of her top being a literal rainbow. Could this be a hint that as well as being the first female Doctor, she could also be the first gay Doctor too? Don’t forget the Doctor is still married to River Song, so this is not as unlikely as it may seem.

One blink and you’ll miss it detail that’s also present is also that the Doctor now has piercings, sporting a couple of earrings in the left ear. It’s also been confirmed that the Doctor’s coat, which looks like it may well be hooded, is actually light blue and not beige or gray as the photo suggests. All these elements also represent a nod to previous Doctors’ outfits, such as David Tenant’s long coat, Matt Smith’s boots and braces and the stripey patter of Tom Baker’s infamous scarf.

It’s impossible to say for definite what this might tell us about the new Doctor. Based on looks alone the Sixth Doctor should have been the most fun of the lot. What we actually got was a smug grammar Nazi who was one the hardest to like of all Regenerations.