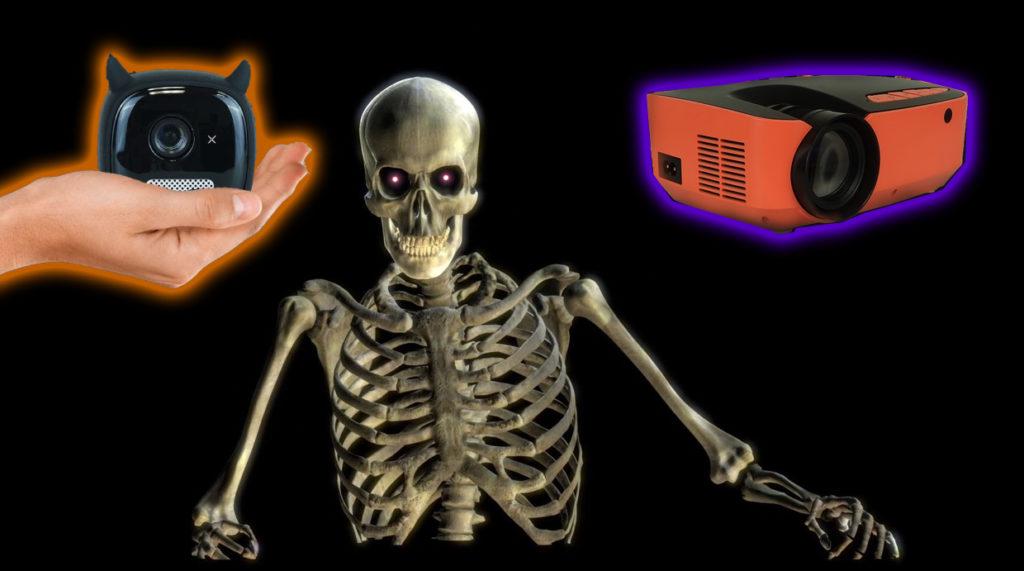 When I went to Midsummer Scream, there was one booth in particular that took my breath away. I had always loved the Halloween projectors that I had seen being used in my neighbor’s décor but was never able to test them myself. Thanks to Spectral Illusions who connected me with AAXA Technologies, I was able to test out not one projector, but TWO! Here’s the nitty gritty of what each one offers and which one is best to get depending on what you’re using it for.

This little guy gave off a beautiful picture! It’s also really adorable to look at. It’s all black and has tiny demon/devil horns. Comes with a screw in base so that you can angle it however you like. The picture gets up to 100″ wide and it looks great. It’s slightly blurrier than the HP3 but that’s also because it’s just a smaller system.

The speaker is Bluetooth speaker compatible which is a necessity for this if you want to hear it loud. The speaker in the projector works up to a point but when you want it at full volume, things like the crackling lightning effects in one of the videos it comes with are too much and overload the speaker.

Smaller side windows, wall space, or to use on the Garage door. It’s also tiny so you can really easily store it in a drawer or wherever you want until the next year. It would be easy to place inconspicuously to scare a guest with a spooky illusion at your next party.

This thing is wonderful! It’s 720p so it’s about as good as a couple generations ago television. And this one also has an HDMI input so you can hook up your home media devices to it. The picture looks great with the provided Halloween projections and it comes with 6 videos. I used this as a second screen so that my husband and I could watch television or play games while the kids watched “Bluey” or “Peppa Pig.”

It has a spot where you can attach a tripod underneath it but does not come with one. It’s bigger than the HP2 but it’s worth it because of the speaker. This one you can turn up all the way and have no problems with the audio cutting out.

I loved this projector. It looks amazing in and outside the house. You ideally want it to have as little light around it so that it really pops. This one I would recommend keeping in the house and projecting onto a sheet in the window. Use the audio output to hook up your speakers and play it loud. I wouldn’t want this outside because I don’t trust people. But if you do, that’s fine too.

Home movie nights, dual screens, or scaring your mother-in-law by placing it in the bathroom with a ghost projected on the wall. Not that I’d ever do that…

Both projectors are great for images, the HP3 by far out performs the HP2 in quality of speaker. I would definitely get the HP3 as a second home media set up device. Like I said It’s easy to set up and you can plug in a Roku express so that you can keep the kids, guests or whoever you’re entertaining occupied. The HP2 can be thrown in a purse if you wanted to take it somewhere. Both are portable and require a power outlet.

Spectral Illusions has some really great videos that you can put onto the MicroSD card and play in these projectors. I fully recommend checking all of them out!