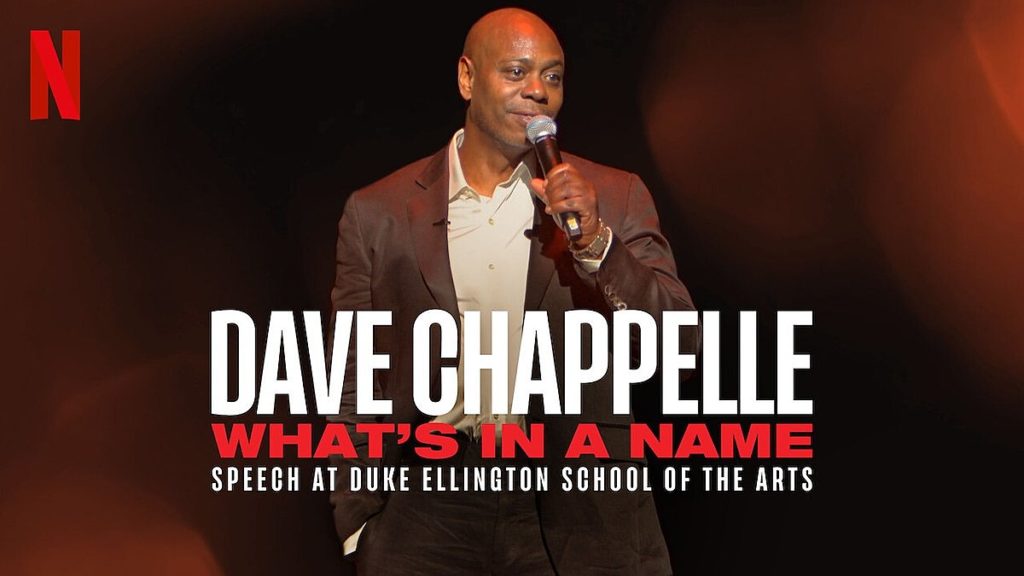 Streaming giant Netflix has released “What’s In A Name,” a new speech from controversial comedian Dave Chappelle. There was no announcement or advertising before its launch.

The 40-minute speech is taken from a talk Chappelle gave at his alma mater, Duke Ellington School of the Arts in Washington, D.C. This talk took place in June 2022 during a planned ceremony to rename the school’s theater after the comedian. The renaming caused an uproar among students because of transphobic comments made by Chappelle in his 2021 Netflix stand-up special, “The Closer.”

The students contended he was ignoring the requests of the LGBTQ community regarding his material. Due to the controversy, the school- as well as Chapelle- opted to rename it the Theater for Artistic Freedom and Expression.

While the speech itself primarily focuses on the performer’s time at the school, around the 30-minute mark, he decides to address the controversy head-on. Chappelle compared “The Closer” to the defacing of Leonardo DaVinci‘s “Mona Lisa” back in May. “I saw in the newspaper that a man who was dressed in women’s clothing threw a pie at the Mona Lisa and tried to deface it. And it made me laugh and I thought, ‘It’s like The Closer,’ “ Chapelle remarked.

He also addressed a prior Q&A at the school. “All the kids were screaming and yelling. I remember, I said to the kids, I go, ‘Well, OK, well what do you guys think I did wrong?’ And a line formed. These kids said everything about gender, and this and that and the other, but they didn’t say anything about art,” Chappelle argued. “And this is my biggest gripe with this whole controversy with ‘The Closer’: That you cannot report on an artist’s work and remove artistic nuance from his words.”

The comedian then goes on to explain “It would be like if you were reading a newspaper and they say, ‘Man Shot in the Face by a Six-Foot Rabbit Expected to Survive,’ you’d be like, ‘Oh my god,’ and they never tell you it’s a Bugs Bunny cartoon.”

Chappelle suggests these students are simply parroting anti-Chappelle rhetoric. Claiming that “those talking points coming out of those children’s faces” “really hurt” him. Only to add that “these kids didn’t understand that they were instruments of oppression.”

You can watch, if you chose to, Dave Chappelle’s various Netflix comedy specials via their streaming service.