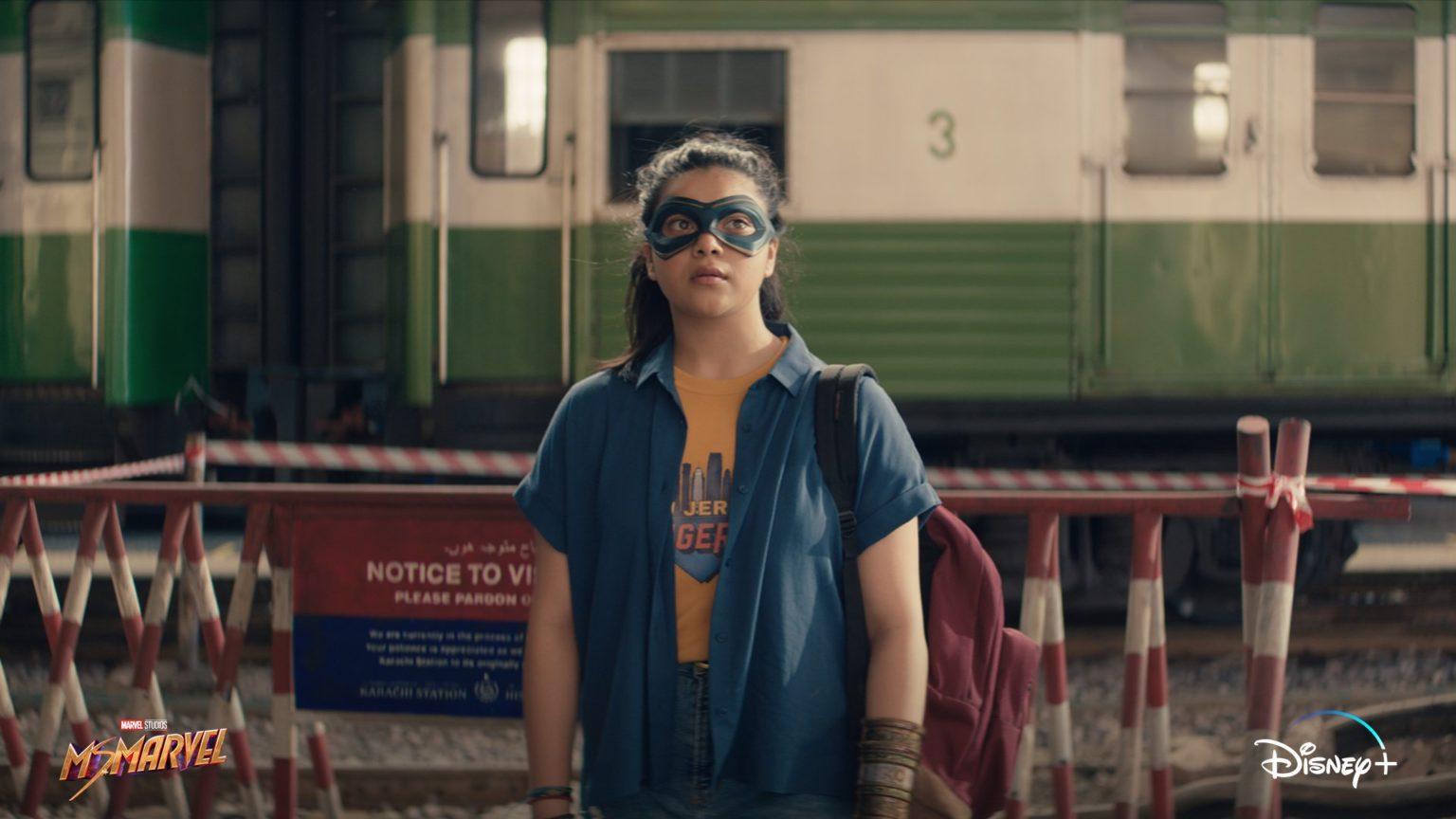 For all its posturing and attempts at true diversity in Hollywood, I don’t think I’m alone in saying that they still have a long way to go. Sure, we can give some credit for trying, but more often than not their efforts and skewed and shrouded in exploitative contexts instead of earnest cultural exploration. Which adds more fuel to the idiotic “woke/liberal” discourse. We’re not going to have that discussion here, and I only bring it up to demonstrate the uniqueness of “Ms. Marvel.”

You don’t really have to look any further than the majority of negative reviews of the show on social media. These are predominantly comprised of angry racists APALLED Marvel Studios would make a series about “a hero who isn’t white and Christian and full on America.” Yes, I relish in their tears, but rather than go down the rabbit hole as to why they’re so wrong, I want to discuss more of what “Ms. Marvel” gets right. For starters, it refuses to engage in this kind of discourse, and does so for the two reasons I want to dig a little deeper into: celebratory representation and joyous healthy fandom.

As always with these things, I gotta inject a disclaimer. I will be speaking in broad strokes, with many of those citing complex issues rather than simple ones. I am aware there is a huge spectrum of worldviews when it comes to cultures, film, and matters of race; so if you’re opinion or thoughts are represented here just know that I am acutely aware that it is impossible to categorize everyone into a handful of mindsets. When I say things like “white people” or “white eyes,” I am by no means saying “all white people” as much as I am simply highlight a very common problem in a massive, subjective, complicated industry. I am referring more to the consistency of the issues in particular examples rather than trying to lump an entire race into one worldview. Frankly, that would dismiss my entire argument, but for the sake of time I have to generalize more than I would like to.

Let’s start with celebratory representation, something that shouldn’t be as unique as it currently is but is the prime example as to why “Ms. Marvel” feels so authentic. That’s because it is, but it does so in ways that many, many other properties should follow suit. Akin to the celebration of black excellence in “Black Panther,” the series is created by and for the cultural it is representing, and brilliantly avoids a number of pitfalls that often expose the attempt at representation as a little more than surface level. For starters, this series avoids one of the biggest mistakes in film and television: cultural representation told through white eyes.

We’ve all seen it. The film wants to transport us to a culture different than our own, but consistently tells us that we aren’t smart enough to experience it all without a guide that looks like us. What transpires is a hands off approach, or an outside looking in experience that keeps the potential immersion at arms length. We only ever see and experience places and cultures different than our own from the outside looking in, which often causes us to indulge more stereotypes than actual cultural nuances. It rarely feels alive and lived in, and becomes a checklist of surface level confirmations.

It’s not always as egregious as say “The Great Wall” or as out of touch with their own tropes like “Green Book,” but those are pretty solid examples of the kind of thing I’m talking about here. [Sarcasm] We can’t understand Chinese culture and history without a white guy to explain it to us, and we can’t understand black heroes in tough times without a white guy who helps him solve racism. “Ms. Marvel” does none of this, and decidedly chooses to celebrate culture and immerse you in it as it is instead of trying to explain it to us. The series drops us right into the heart of the community, and never once pauses to try and explain traditions and family dynamics in a dumbed down version.

We are immersed in the world with which Kamala Khan lives, and that allows the representation to help tell the story rather than making the story about representation. This show prompts you to ask questions about what you’re watching, but in ways other iterations or attempts rarely do. What are these wedding ceremony traditions? What food is that? These clothes? Bangles? Djinn? What is the Partition of India? The inquiries are endless, but they are meaningful questions we should discover on our own rather than have someone who looks like us interpret them on our behalf.

The second part of this success lies in the celebration of all of these things. The show not only thrusts you into an unfamiliar culture, but it celebrates it all with heart and reverence. This again is a staunch difference from how this is generally handled in other films and series. Even if some correct the white savior trope, they often only focus on the worst of the culture instead of celebrating the best of it. It is as if the only stories of different peoples worth telling are the traumatic ones, or framed in terms of difficulty and struggle as it clashes against others. There are countless examples of this, but what comes to mind most is “Them,” a series so set on exploring the trauma of black people in America it almost feels like some sort of torture porn. This is an extreme, but still gets the point across in the worst of ways and leaves viewers with one singular takeaway: There simply HAS to be more to black culture than slavery and segregation. “Ms. Marvel” seems to understand that there is more to Muslims than terrorism. I get how awful that sounds to say out loud, but when was the last time you saw a film that didn’t paint that entire part of the world as one, singular religion who’s sole purpose is to be a villain set on destroying everything American?

It is a sad but harsh reality about the way the world views a people, culture and religion we often don’t take the time to learn more about, and “Ms. Marvel” takes the challenge head on, and doesn’t even bother with any of those aspects. Instead, it finds all of the wonderful and rich history and traditions the culture has to offer and puts it front and center in a celebratory lens. It is enthralling and intriguing and downright refreshing. Nothing feels like it is trying to hard or exploiting certain aspects to make us feel any one way or another. It simply seeks to tell a hero story with a different kind of backdrop, and finds the magic and joy in all of it. It is so nuanced and knowledgable in its cultural understanding, nailing simple things like family dynamics and importance and traditions with an homage and nostalgia from someone who clearly lived it. “Ms. Marvel” is representation done right, and more and more shows and films need to take notes.

The second part of the show’s success is in their genuine love for healthy fandom. We are living in a toxic cesspool of online discourse for just about every single IP in existence, so much so that some of it has even made itself a key character or characters in said properties. I don’t know if this was intentioned or laid on it after the face, but Kylo Ren’s temperament can be seen as the film manifestation of toxic “Star Wars” fanboys. Whether intended or not, you don’t have to be all that skilled at film criticism to see where that interpretation comes from. The point is, most of what gets discussed are the toxic side effects of loving something so much you end up hating everything about it. This is obviously magnified by the megaphone of social media and things like Film Twitter, which lets everyone with a keyboard tell you why you’re wrong for loving things.

“Ms. Marvel” loudly allows Kamala be the Avengers fan we all want to be. [Editor’s note: Similar to Kate Bishop’s love of Hawkeye in that Disney+ series.] She loves deep without abandon, and while part of the story is her growing from fangirl to hero in her own right, she is never truly chastised for loving something. This isn’t a parody or social critique like we see in “The Boys.” No, this is the hall pass we’ve all wanted for so long, to not have to apologize for being a fan of something. And look, I’m not on a high horse here. I’d be calling the kettle black if I didn’t admit I’ve fallen into the trap of irrelevant discourse like this- going after people for loving something I don’t enjoy.

“Ms. Marvel” is a refreshing wake up call that fandom can be celebrated and doesn’t have always have to be so awful and toxic all the time. Every episode is packed with joy, and consistently reminds me that it is ok to be a fan and relish in that fandom.

There’s a myriad of reasons that probably contribute to both of these things. From the true fan casting and approach of the series star Iman Vellani (who just OOZES with charisma and joy and fangirl energy I can’t get enough of), to the fact that the entire cast, writers room, AND director are almost entirely comprised of Pakistani-Americans, to even the source material being deeply rooted in a lot of the things we’ve discussed already. “Ms. Marvel” manages to combine all of this into something truly special and refreshing, and packs a noor punch of joy with every single new outing. It is proof that true, authentic cultural representation and healthy fandom can be celebrated and used to create a wonderful series worth watching.

This show has been some of the best television the MCU has produced so far, and I hope that they continue the current trend of inclusion and storytelling done right. I also hope the rest of Hollywood gets into the idea of there’s more to diversity than just having a multicolored cast. Their stories need to be told with love, respect, and experience as well.

“Ms. Marvel” is currently streaming on Disney+. You can watch the trailer below. We’ll also be seeing Kamala Khan in the upcoming Marvel Studios’ film “The Marvels,” due out July 28th 2023.