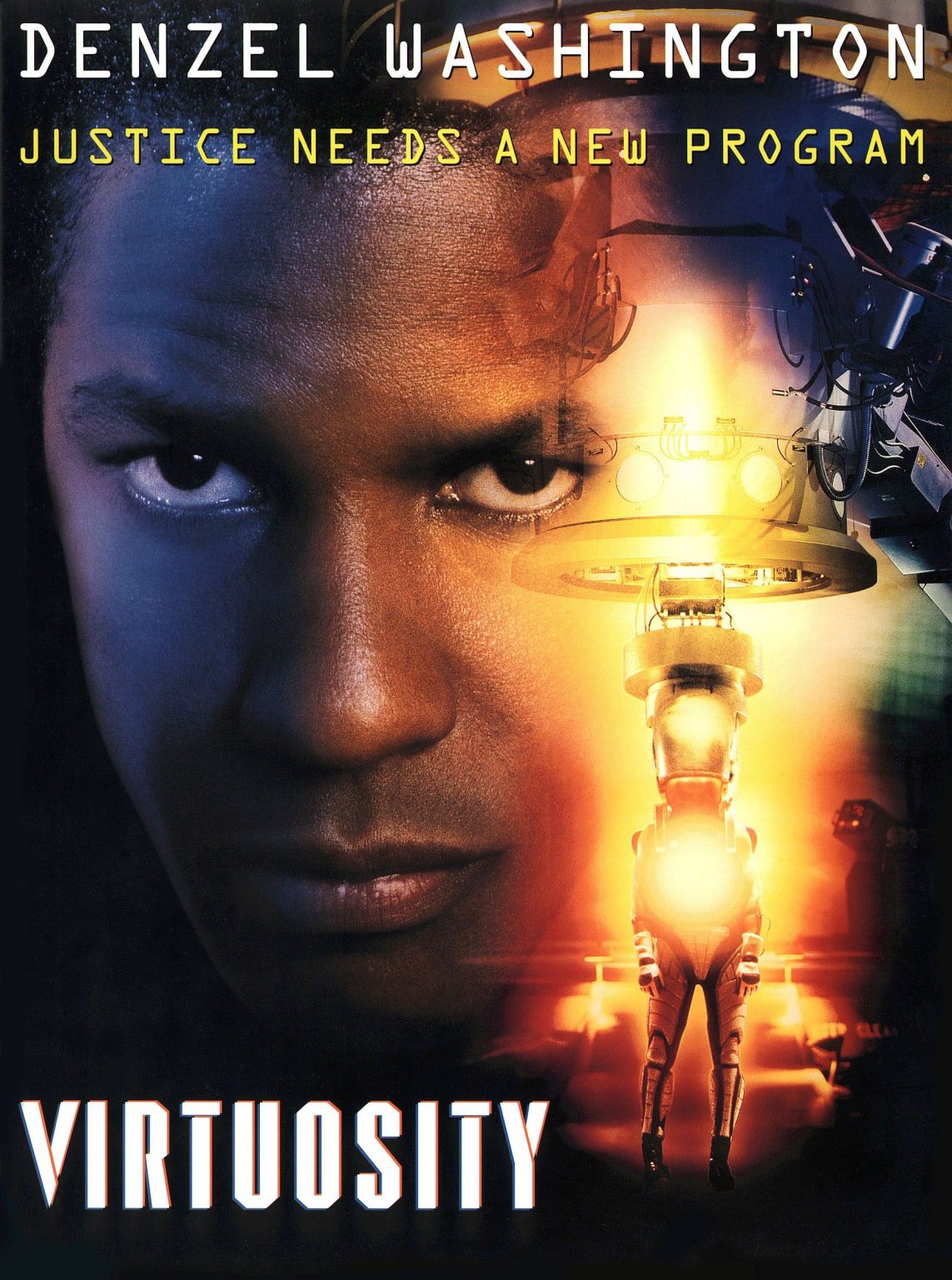 As I continue to travel down the memory of lane of 1995, films like “Virtuosity” always cause me to question early technological fantasy versus technological reality. It is astounding that we are living in a time where technology and imagination are seemingly closer than ever. Today, we know beyond a shadow of a doubt what technology is capable of even if it hasn’t come to fruition.

In 1995, the gap between technology and imagination was much wider, with much of Hollywood taking stabs in the dark about what we the internet actually was and could be. “Virtuosity” lacks the tongue and cheek charm of its predecessors, making it a lackluster hodge-podge of sci-fi thriller concepts that ultimately crumbles under the weight of its own ambitions.

Ex-cop Lt. Parker Barnes (Denzel Washington) has been imprisoned after exacting revenge on the serial killer Matt Grimes who killed his wife and daughter. In prison, he is chosen for a new off the books virtual training program known as SID 67 (Russell Crowe). Convicts are sent in to the program to track down an AI serial killer program (with the minds of over 200 killer including Matt Grimes). The program becomes more advanced and ultimately uncontrollable, killing one of the inmates during an exercise. The powers that be demand the program be shut down. Of course, the creator of the program decides to combine nanontech with his AI program and bring SID 6.7 into the real world. Now using Grimes as his dominant killer personality, Barnes set loose to track him down before he wreaks havoc on the city.

If any of this plot sounds convoluted, know that it has been significantly dumbed down. Furthermore, if any of this sounds familiar, that’s probably because it feels very much like a rip off of many other films that execute much better, even with a star studded cast. “Virtuosity” feels like someone watched “Demolition Man” and decided the film would be better without time travel and adding AI over cryo-freezing. Unfortunately, “Virtuosity” lacks everything that made similar films work. For starters, Even with Russell Crowe doing his best Wesley Snipes impression, the film lacks any sense of humor or charm that makes others like far more palpable. “Virtuosity” takes itself far too seriously despite having nothing to say. Without being willing to see the ridiculousness of its premise, the films failures are put front and center rather than masked by worth while characters.

Directed by Brett Leonard (who gave us gems like “Killer Clowns from Outer Space” and “Lawnmower Man“), it shouldn’t be surprising that “Virtuosity” deals with virtual reality and AI. Unfortunately, Leonard can’t seem to make writer Eric Bernt’s pages work.

There is so much computer mumbo jumbo going on here that not even the film itself can make sense of it. While the idea of AI becoming aware and existing in a virtual training program going rogue isn’t too far fetched, adding nanotech for no other reason than plot convenience is hard to believe. It’s not even a part of the training program when we’re introduced to it. The technology comes out of nowhere and only appears when it is needed to bring SID 6.7 to the real world. It’s a silly plot device, one that seems to get worse as the film trudges along.

In other plot failures, Barnes isn’t particularly interesting or developed. Actually, none of the cast is. Even with Washington and Crowe at the forefront, they are only given so much to work with that even they can elevate their characters beyond the surface levels of their character tropes. For example, Barnes is defined by a tragedy we don’t actually see play out until about halfway through the film. Likewise, SID 6.7 is supposedly a combination of nearly 200 serial killers including Adolf Hitler, John Wayne Gacy, and Jeffery Dahmer, but somehow Matt Grimes (a political terrorist we’re told) is the dominant killer for the program.

Even the corporate stooge who releases the AI into the real world has no real motivations for doing so other than he doesn’t want the program to shut down. It’s all so flimsy, and there’s absolutely 0 humor to offer any kind of distraction from it. All of this would be fine if anyone in “Virtuosity” would acknowledge how bizarre and silly everything actually is. However, no one does this, leaving us with far more questions than enjoyment.

Lastly, the special effects of the film are simultaneously lackluster even for 1995 but great in that they are used sparingly until the film’s climax. The ridiculous conjuring of VR is acceptable because it is not meant to mimic reality. In the opening sequence, Barnes is hunting SID 6.7 in the program which occasionally glitches from time to time. These clever uses of special effects are the films strengths, and while the abandon them for bizarre acid trips that mirror windows 95 screen savers, one can respect some of their restraint for a large portion of the film.

“Virtuosity” is a mess from start to finish, and its star studded cast can’t make up for its convoluted plot and ridiculous premise. There are number of computer faux pas one can forgive for films in 1995, but the film has to give you something to defend. Films like “Demolition Man” are no less bizarre or convoluted, but it is just self referential enough to be enjoyed, allowing us to overlook its silliness. Likewise, Stallone is fish out of water protagonist, navigating a strange new future as he tracks down Phoenix. This makes him likable and relatable, and allows viewers to dismiss any misgivings about the plot itself. Denzel’s Barnes is a hard nosed cop and nothing else. He’s not fun, funny, or even slightly relatable. He just wants to kill virtual Grimes, and his character never goes beyond that.

“Hackers” is another great example of a film that suffers from its Hollywood makeover of early computer hacking but acknowledges that very thing with larger than life characters, many of which are so fun to watch we are willing to overlook its far reaching ambition. (And, if you’d like to see what Nerdbot’s Retro Crew Review had to say about it, check out this live stream.)

When compared to similar sci-fi computer films, “Virtuosity” offers none of that. We’re left with noting but a young Russell Crowe pretending to be Simon Phoenix, and fun little prison fight where Denzel punches a nazi. That’s about all this film has to offer, so if that’s your thing you’ll certainly enjoy this film much more than I did.