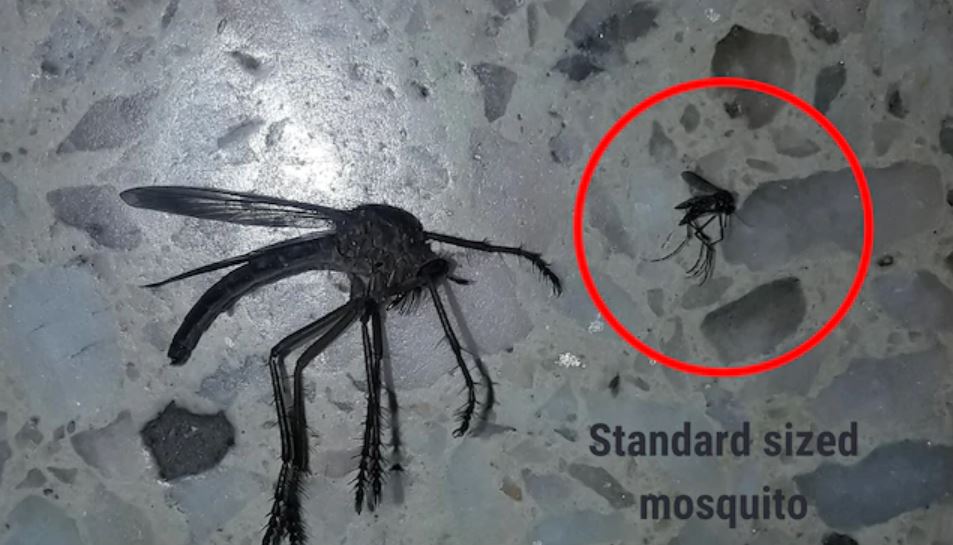 In what looks like something out of Jumanji people are now terrified from a photo of an enormous mosquito next to a regular sized one.

The huge bug was reportedly found in Cordoba which is located in the central Argentine province of the same name.

A Facebook user by the name of Ezequiel Lobo posted the original image. In the post he said, “Look at the size of the mosquito that just came in through my window. He came in like a champion, my mother panicked and sprayed it with Raid. I haven’t found anything similar online. Either it’s Chernobyl’s new evolution or I just found out that I am in Jumanji.”

First of all way to go mom, you get that bug out of your house! Second of all, how scary is that?

According to a helpful commenter, “The small one on the right side is Aedes aegypti and it can transmit Dengue fever, Yellow fever, Zika… The enormous one on the left is Psorophora ciliata, and it cannot cause anything like that.”

Here’s where we get into the mom section of the post. Where I plead with you to please please please get rid of any stagnant water around your house. Don’t leave water out for stray cats and not refresh it, don’t have a weird puddle just sitting there, that is where mosquitoes like to breed. And if they find a nice spot they are going to stay and then infiltrate your home like tiny flying marines.

And it was most recently in California at least that we had all those terrible tiny mosquitos that would go for the legs last year. So something like this would be a nightmare. People have identified it as Psorophora ciliata but that hasn’t been confirmed yet. Until they get more information on this bug it’s better to play it safe and pick up a can of Raid from the store.

What do you think of this thing? Tell us in the comments what the biggest bug you ever saw was!

It Looks Like We May Be Getting a Lethal Weapon 5