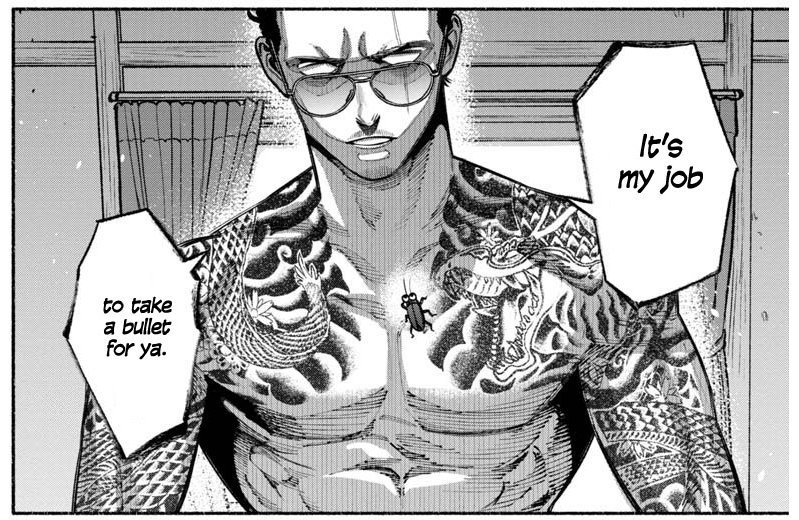 The Immortal Tatsu Takes on Domesticity

This manga fallows the former Yakuza Member Tatsu, as he traverses the world as not only as a civilian, but as a househusband. Miku, his wife, works as a designer and has little free time for housework. Because of this, Tatsu has immersed himself in domesticity with the same swagger and presence he had as a mobster.

The manga doesn’t have a straightforward plot line, with each chapter being on a situational basis. This can range from Tatsu opening up shop at a farmers market, babysitting the neighbors kid, trying an aerobics class ect.

Many of the chapters follow a similar formula: A everyday situation occurs and Tatsu deals with it based on the combined knowledge of a gangster and a househusband.The following is a classic joke from a chapter of Gokushufudou.

While the story of their meeting hasn’t been fully explored, it has been sprinkled enough to quell the need for character depth( for now ). While some chapters may bring up his history or challenge his current lifestyle, either attempts just cements how comfortable/happy he is as a househusband.

His wife, Miku, isn’t just a happy, lucky-go lady. While Tatsu may have the personality of a gangster, his wife can keep him in line and match his deadly energy.

There’s an interesting position to take when examining the portrayal of Masculinity in the book. While our protagonist takes the traditionally feminine role in his relationship, he sacrifices none of which could be considered Masculine traits. In fact , he integrates them into his routines losing none of his personality traits.

Gokushufudou shows that a man can be masculine while taking on what is a historically feminine role. Even when he tries to do activities that are feminine, even when he tried to be “cute”, he brought his typical charm to it.

There’s the idea that being “Man” and being a ” Woman” can’t really mix, but this manga shows that one can really do typically gendered role and retain their own.

The english Versions of the Manga( licensed by VIZ ) have just recently dropped, and you can pick it up there or on Amazon and through other distributors for under 15 dollars American.

So does this series interest you ? or does it just fall short on its appeal ? Lets us know in the comments down below !