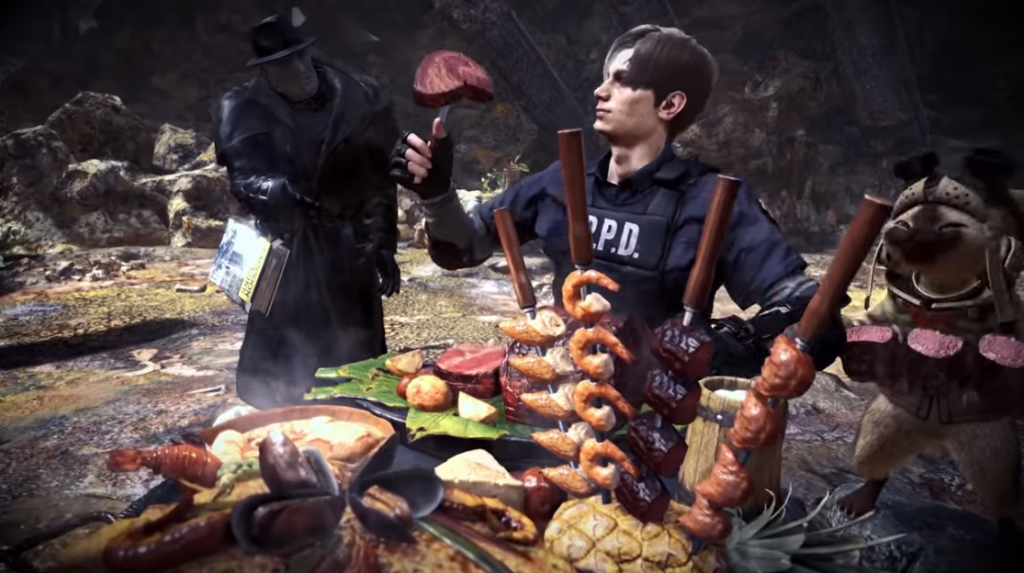 Monsters and zombies in the same place? Umbrella Corporation wouldn’t have it any other way. The Resident Evil crossover event with Monster Hunter World: Iceborne has been live for a bit now.

From November 7 until December 5, hunters can obtain Resident Evil goodies by taking on the Event Quest “RE: Return of the Bioweapon.” This quest sees you and three hunters taking on the terrifying Blackveil Vaal Hazak. This Vaal Hazak is not like one you have fought before though. Normally, Vaal Hazak can inflict a status effect known as effluvial build-up which will cut your HP bar significantly. This Vaal Hazak however inflicts a different status effect- zombification.

Once zombified, your character no longer reacts to damage, your health recovers gradually over time, and acidic damage is negated. Additionally, areas with a lot of effluvial build-up actually restore your health. However, there are drawbacks. While zombified you cannot dodge and your walking speed is dramatically decreased. You can also only use limited items such as herbs, whetstones, Specialized Tools, and the Special Scope. Normal Items and interactables in the environment also will not restore your health.

Players can use special Green Herbs found in the environment to restore your health and revert you to your normal self. Rare Red Herbs can also be found and mixed with the green herbs to create Mixed Herbs, which restores all of your health. After the fight, you will obtain a special item called the S.T.A.R.S. badge along with Blackveil parts. You can use these items to create two Full Armor sets that turn your character into Leon Kennedy and Claire Redfield from Resident Evil 2.

After you complete the quest you can head to your Housekeeper to earn two new gestures. One is the Zombie Bite gesture which does slight damage to monsters. The other is the Raccoon City: Zombify gesture which can turn you into or out of a zombie state. Additionally, you will get Delivery Requests which allow you to get the Typewriter and Item Box for your house in Seliana. You will also get new songs for your house and new options on your Guild Card.

If you are willing to spend some real world money, a Sticker Set and Black Impact music track are available for purchase. Also, you can hilariously purchase a Handler outfit which turns her into Mr. X. It really takes some of the fear away when you see Mr. X shoving his face full of food.