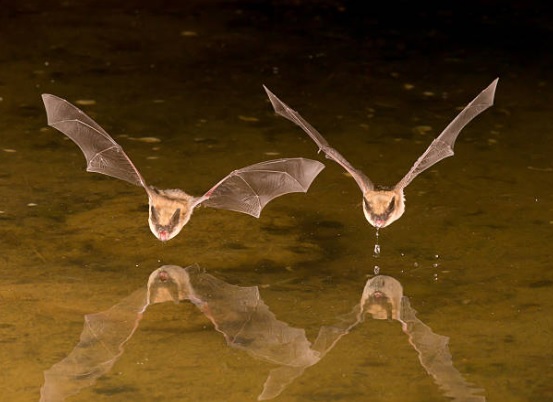 The Truth About Vampires

There are some very real vampires in the world. Scary, right?! Well, they aren’t people. A number of species are “blood predators”, drinking blood or body fluids rather than killing or parasitizing another animal.

We are all familiar with leeches and mosquitoes, but let’s talk about the coolest vampires of all: Vampire bats.

Vampire bats are very real bats found in Central and South America. With climate change, they might even make their way into the Southern US… but that’s a big maybe. There are a few species in a few different genera, but all the vampire bats fall into the subfamily Desmodontinae. These are the only known mammals to have ever evolved to feed exclusively on blood.

Vampire bats fly around and look for sleeping large animals, like cows, horses, or yes, people. Then they slowly crawl up to their prey. Tiny bat bites on large animals rarely wake them up, so the bats can lap up the blood and pee out the excess water as they go. How do they do it?

Yes, vampire bats have a protein in their body called Draculin. This protein does a very simple but very important thing for an animal that drinks blood: it prevents clotting. That way the bat can feed on some delicious cow blood but also it doesn’t end up with a ball of clotted blood in its stomach or having to constantly bite new holes to feed.

EVVIIIILLL! Or, well, actually not evil at all.

Vampire bats live in massive colonies. They have close families and friends. In fact, vampire bats are not territorial at all and feel much safer in groups. They also share meals and females have even been known to take orphan babies from fellow cave members. Vampire bats are so social and friendly that social bonds formed in one place (like a rehab facility or zoo) persist when they are released back into the wild. Vampire bat friends want to stay friends even in completely new situations.

Vampire bats can transmit disease to people, but it’s fairly rare. They prefer to drink blood from large, sleeping livestock. Bats worldwide are also in peril. A fungus is killing many of our North American bats. Bats are also persecuted in many places because they are “scary”. They aren’t…

Other bats eat small animals, fruits, mosquitoes, or pollinate flowers. Even vampire bats are worthy of their place in the universe. If you see a bat, hug it! Well, actually don’t hug a bat, but why not put up a bat box in the yard for your flying friends?

What weird animal do you love the most? Let Nerdbot know in the comments!