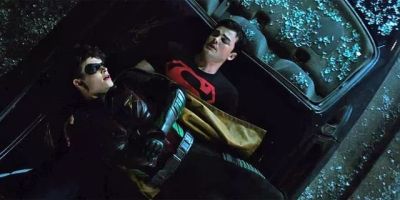 Superboy Saves Robin On This Week’s Episode Of Titans

The last episode, which ended with a cliffhanger, takes backstage as the Titans audience is introduced to their favorite new half kryptonian, Superboy .

So will this new kryptonian rise to the occasion, and become a hero like his father ? Or will he fall into Villainy like his other father.

Picking up from the ends of Season Ones finale, Conner ( a name he picks off of a guards clothes he steals, rescues test subject ” Krypto” and they escape Cadmus Labs. Memories of his Genetic Parents sporadically hit him, causing him to wind up at the farm of Lionel Luthor. After disposing of the Guards who followed him, he meets his creator Dr. Eve Watson.

Dr. Watson takes Conner to San Francisco to help him better understand himself, where she tries to help him understand that he’s his own person. Free of whatever his parents are, and that he doesn’t have to adhere to either of their paths.

When the Cadmus teams arrives at the lab, Conner and Krypto Escape and promise the Dr. that they’ll keep a low profile. This is immediately broken however, when conner saves a falling Robin( Jason Todd) from an exploding scaffolding. The episode ends with Krypto Captured and with Conner on the ground with two bullets ( implied Kryptonite) in his chest.

With the high suspense of the previous episode still in mind, it was nice to take a step back and focus on a single character. By doing this you give the audience two feelings : one of anticipation since we aren’t sure of what’s going to happen next and another of strange relief as we narrow the story a bit.

Joshua Orpins performance as Superboy is delightful, displaying a surprising amount of nuance in this role that easily could’ve been messed up. The balancing act between this pure impulsive person, being triggered into acting like his parents and a childish frustration of the unknown.

The fight scenes were fun, taking a departure from the hand to hand combat we’ve seen and showing off the flashy abilities Conner and Krypto had to offer. ( fingers crossed on him being able to fly ) And while the episode had a similar atmosphere and tone as the others, but because it was so focused on this singular character, it ran smoother than usual.

With the next episode being titled ” Batman ” it’s very likely that we’ll finally see Bruce Wayne for more than a couple of minutes. Will he be able to help Conner ? And Whats Deathstrokes next move ? The possibilities are endless.

So what’s your opinion on the episode ? Did you love the introduction of Superboy or is he lacking something ? let us know in the comments down below !

The Best Horror/Thriller Movies to Watch this Halloween (on Netflix)

Webtoon’s ‘Lore Olympus’ to be Developed as YA Animated Series