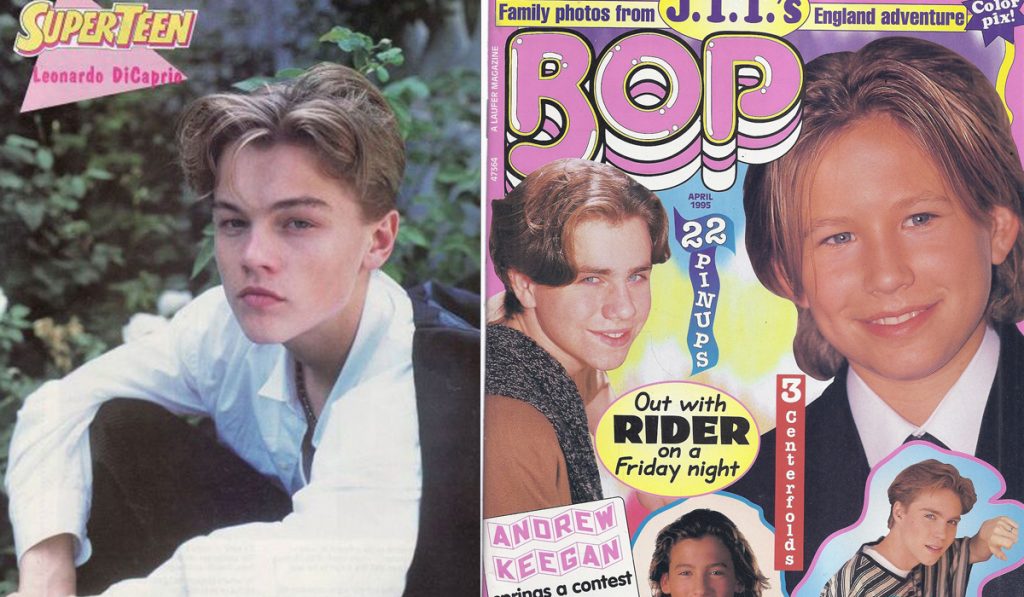 Growing up in the 90’s and going to the grocery store with your parents was always an expedition. My particular favorite thing to do was to check out the magazine section. They had what I wanted, and what that was was boys. Teen Beat, Tiger Beat, Teen Magazine, BOP, they were all a must buy and I know they weren’t cheap. So thanks to my mom who would get them for me. If they had even the smallest picture of Jonathan Taylor Thomas I HAD to have it.

It wasn’t just my love of JTT around that time. It was also Casper’s Devon Sawa. “Can I keep you?” Hell yes you can. The nineties bred two things. Boy bands, and floppy haired heart throbs. Mix that in with some Spice Girls, crushes on Christina Ricci and Winona Ryder and you pretty much get the picture. Here is my list of the top 6 90’s heartthrobs based loosely on the floppiness of their hair. Well, kind of.

It really doesn’t take more than a movie about Christina Ricci and a lonely ghost to introduce my heart to a new crush. Devon Sawa played the human version of Casper(1995) and knowing that he was so lonely really got me attached to the idea that he somehow needed me. I’m sure many kids with a crush on him felt the same. Devon went on to do a handful of things but nothing ever caught on as well as Casper.

In 2000 he played the title character in Eminem’s Stan music video and most recently is working on a film that is being directed by Fred Durst. The Fanatic is a thriller about Hunter Dunbar(played by Sawa), an actor who is stalked by a character named Moose(John Travolta) Here is what Devon looks like now.

3rd Rock From the Sun came out in 1996 and with it came the face of Joseph Gordon-Levitt. I caught onto this show later when it would re-run around midnight and my insomnia was kicking in hard. But also… hormones. Tommy Solomon on the show stole my pre-teen heart and as he grew up, woah boy. Then in 1999 he was featured in one of the best movies for teen girls probably ever. 10 Things I Hate About You.

He went on to do bigger and better things and is one of those actors that has just stuck around over time. You may have seen him most recently in films like Inception, and 7500 which just premiered at the Locarno Film Festival August 9th of this year.

Honorable Mention for a film I saw him in during childhood, Angels in the Outfield(1994). I must have watched that VHS a million times.

In 1998 the movie Brink played probably once a month. Actually probably more like 2x a week. And Erik von Detten played the cool surfer dude Andy that was a “Soul Skater”. The film featured him going through the weirdness that was in-line skating. Showing how people who were sponsored were kind of sell outs and that you should really be doing something you love for fun.

He went on to do other projects for Disney like playing Clu Bell, a paranormal-investigating teen in the series So Weird. But you probably at least know his voice from playing Sid in the Toy Story films. He is now a family man and doesn’t do a lot of acting. Living comfortably and focusing on being a good dad. Here is what he looks like now.

Rider Strong was a big part of Boy Meets World. He played Cory’s troubled friend Shawn. Shawn was a kid that had rotten luck, but he had a great friend which made his life 1000x better. If not for Rider’s honest portrayal of the character the show would not have done as well as it did. After Boy Meets World he did a couple of B movies. Cabin Fever in 2002 was one where he got to be more gory.

For the most part though it seems that he has stepped into the world of voice acting. He plays Star’s boyfriend and prince of the underworld Tom Lucitor. He has also been directing some short films with his brother Shiloh. He also played Shawn Hunter on the short lived Disney series Girl Meets World which had everyone reprising their roles up to Mr. Feeny.

Rider Strong is most currently working on Star Vs. the Forces of Evil.

Jonathan Taylor Thomas or JTT for short started the demise of my purity. Home Improvement featured a smart mouthed floppy haired boy named Randy and there was no going back. Couple that with the fact that he was also in Tom and Huck and voiced Simba from my favorite Disney movie growing up you bet I was buying every Teen Bop or Tiger Beat I could get my hands on with any snippet or mention of him. And while I don’t have any pictures to prove it at one time my mom thought that my room would collapse from all the staples in my wall. I had his pictures plastered all over my room from the 4th grade to the 6th when my focus sharply turned to anime.

He has for the most part been pretty quiet during his adult years. He made a cameo appearance a few times on Tim Allen’s show Last Man Standing but for the most part has been living his life in a pretty normal way. He doesn’t have a twitter and the only social media I could find for him was a bunch of fan pages.

None that seemed like they were really run by him. So for now he remains a mystery.

It was when James Cameron’s Titanic came out in theaters that I was introduced to Leo. He would grab my heart and pull it along for the next ten-ish years. To be fair I still like him today only it’s more of a respect for his acting than a crush. Pretty much everything he touches is gold. Anyway, Titanic led me to learn more about his acting history and when I found out that he was featured on Growing Pains that was the end of it. I set the VCR to record every single episode he was ever in for that show. Lucky for me it aired on the Disney Channel which was included in our cable package at the time.

Imagine it. Luke Bower a rebel. This was his first scene in Growing Pains and it’s no wonder I was drawn in. I mean look at that bad boy appeal. But also like who just happens to have a feather and a coin on them at all times?

You have for sure seen him in something recently. Be it Inception with our number 5 pick of Joseph Gordon-Levitt, or the most recent Once Upon a Time in Hollywood.

There is no slowing him down as he has made this name for himself by seemingly having the Midas touch for any film he is a part of.

Did I miss any of your favorite floppy haired boys? Tell us in the comments who your pre-teen crush was. It can be from any decade!