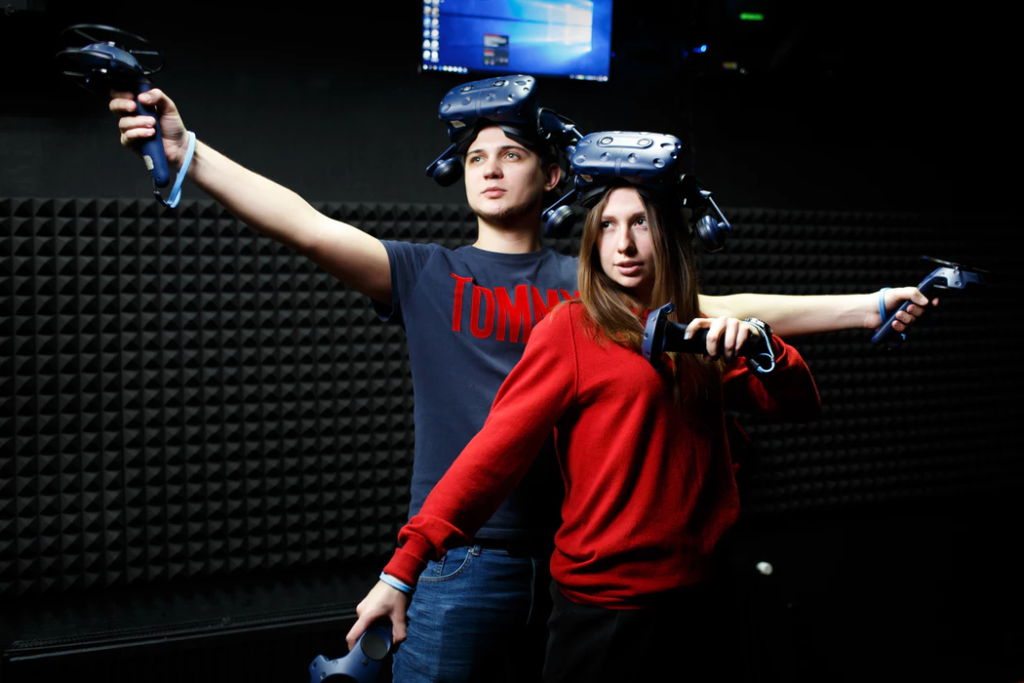 How Virtual and Augmented Reality Have Transformed the Gaming Industry

What was your first gaming system? From the Nintendo Entertainment System to a rudimentary personal computer, gaming strictly used to mean sitting in one location to enjoy your game. You still had the distractions of the real world around you, and your parents probably stopped your gameplay so you could focus on homework, but most of your time was spent in one place.

Now, you can experience new worlds and different versions of your real world with the use of virtual reality and augmented reality, experiences that can really level up your games. Let’s take a look at what this means for you and the video game industry at large.

From the mid-2000s, it was clear that there was a growing demand for more immersive entertainment. Escape rooms — a concept based on video games of the same time that tasked players with leaving a puzzle-riddled room — saw a sharp rise in popularity. The thrill of solving problems in an immersive environment remains popular to this day.

This growth in demand demonstrated the public’s willingness to embrace immersive experiences in earnest. From a concept developed back in the 1980s, virtual reality (VR) is all about delivering an immersive experience. With the growth of technology, it was only a matter of time before VR would help meet this demand.

VR lends itself to cinematic and story-based play and anything meant to engage your senses. VR immersively employs the use of surround sound and stunning visuals to make you feel like you’re in another place or time. Examples include Time Transit VR, Flying Aces: Navy Pilot Simulator, The Ruins: VR Escape the Room and Roomscale Coaster, all available for Oculus Rift.

If you’re interested in educational gaming, VR can let you learn about things in a safe environment. Instead of playing Operation on an old-fashioned game board, you can try operating on a simulated patient in a realistic hospital setting. Just as with the board game, your failures, realistic as they may be, don’t actually hurt anyone.

Augmented reality (AR) games layer game assets over real-world elements and enhance the real world virtually, and it is one of the top trends in mobile apps today. If you look through your phone’s camera function with an AR game enabled, you might see “hidden” objects to collect or insignias indicating other game players. These games can also use your GPS and real-world mapping systems such as Google Maps to enhance gameplay. While Ingress is the pioneer in this area, Google’s map layering has literally changed the game for AR.

Most of this technology, especially in AR, is portable — in fact, many AR games operate on smartphones. We’ve come a long way from your first Game Boy when it comes to gaming on the go, haven’t we?

When you put on a virtual reality headset, you’re dropped into a 360-degree experience. Your entire environment has generally been changed, increasing the level of immersion you can experience.

Many gamers enjoy immersive gaming because it makes them truly feel like part of the story. If you’re playing a character, this can mean feeling like you truly are the character. You can experience immersion in other forms of media, such as books or movies, but role-playing games, in particular, provide you with the opportunity to:

In an augmented reality game, you can view your real world in a new way. AR is especially useful in helping you explore and discover places you haven’t seen yet, even in your own town. There’s a social component to it as well, especially in competitive, team-based games. If you’re near a Pokestop at a popular time of day, you’re going to find more than just Pokemon there — you’ll find more trainers (players) too!

Immersion: The AR and VR Advantage

Since players crave immersion and escapism, VR and AR systems and games are ideal fits. In addition to providing players with high levels of immersion, these types of games also allow the player to feel a greater sense of impact in their virtual environments. Customization is huge, especially in VR; players can create environments, paintings, or even minigames within the gaming environment and then invite others to their virtual living rooms to view them.

This level of immersion and customization solves a big need in the gaming industry, and it’s been a vital transformation. Kids are learning and even building VR machines now as a standard component of gaming.

You know how you might see a specifically placed Pepsi can in the middle of a scene in a movie because the soda company paid for the placement? You’ll now find advertisements and products in VR and AR environments. VR areas might include that Pepsi can, while AR businesses can pay (or volunteer) to host events or virtual items at their location.

For example, when Pokemon Go first came out, every business wanted to be a Pokestop because it brings people into the store and increases visibility.

The Growth of the Free-to-Play Model

Games like Pokemon Go are free to play. In addition to the corporate sponsorship option, these games further the use of micro-transactions, initially popularized by Facebook games like Farmville. With microtransactions, users will pay a certain amount (usually small) to get some instant gratification or enable them to continue play.

This makes the game widely accessible (and therefore more valuable to advertisers) while still turning a profit. Facebook, by the way, has taken notice: The company acquired Oculus (producers of the Oculus Rift VR platform) in 2014, with CEO Mark Zuckerberg indicating VR has a primary place in social communication and gaming in the future.

Remember when AOL (America Online) was around? You had a dashboard for your email, a buddy list with your friends on it, and an internet browser. AOL was revolutionary because it put all those things in one place. If you think about it, Facebook operates similarly, keeping you connected to many functions in one place.

Now, our media will further merge. The future of storytelling involves VR and AR, and Nickelodeon is already in on that game. Expect to see more media like Netflix’s Dark Mirror: Bandersnatch and other choose-your-own-adventure style, interactive movies — but also expect to star in them as VR becomes more integrated.

Through all these changes, VR and AR have helped to secure the stability of the gaming industry by increasing accessibility, embracing mobile gaming, partnering up with corporations, and venturing into the choose-your-own-adventure and streaming movie worlds. Are you ready to keep up?