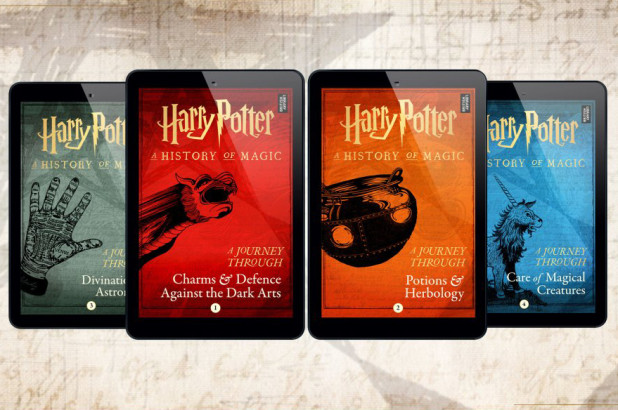 Today on Pottermore it was announced that two of four new Bite-sized non fiction E-books will be available late June. These books are going to cover some of the classes that you can take at Hogwarts and explain the magic and folklore behind the series.

Pottermore’s description for the series is this.

The series features four bitesize reads, each themed by Hogwarts lessons, and will take you back in time once again to learn about the traditional folklore and magic at the heart of the Harry Potter stories, accompanied by some new, gorgeous line drawings from London-based artist Rohan Daniel Eason. You may remember Harry Potter – A History of Magic and the family edition, Harry Potter – A Journey Through A History of Magic, which came out back in 2017. This was followed by the audiobook last year, which featured expanded interviews with the exhibition curators, narrated by Natalie Dormer. These eBook shorts are adapted from the audiobook and are a chance to absorb the colourful characters and curious incidents of the real history of magic in a more compact form – perfect for the train or whatever Muggle transport you prefer.

In addition to exploring the origins of magic through history and folklore, the eBook shorts will also feature notes, manuscript pages and charming sketches as previously seen in Harry Potter: A History of Magic.

It’s kind of a gray area for fans however. At first hearing about four new Harry Potter books was exciting, but upon finding out what they will be about fans are a little upset. JK Rowling has been known to tell us things that we really didn’t need to know about the series. Trying to explain different aspects of the magic may or may not “take the Magic” out of the series.

Also since the book/play came out about Harry and his sons, Harry Potter and The Cursed Child, fans were hoping for more of that story. There is so much that she could do with the series if she followed the lineage of Harry and we would all be so happy. Just something new and different.

Whether or not this gets you excited the good part about it is that the price of these books are only $2.99 on the Kindle store. So even if you are just morbidly curious it won’t cost you much to take a peek.

What do you think of these new books? Will you be reading them? Tell us in the comments!