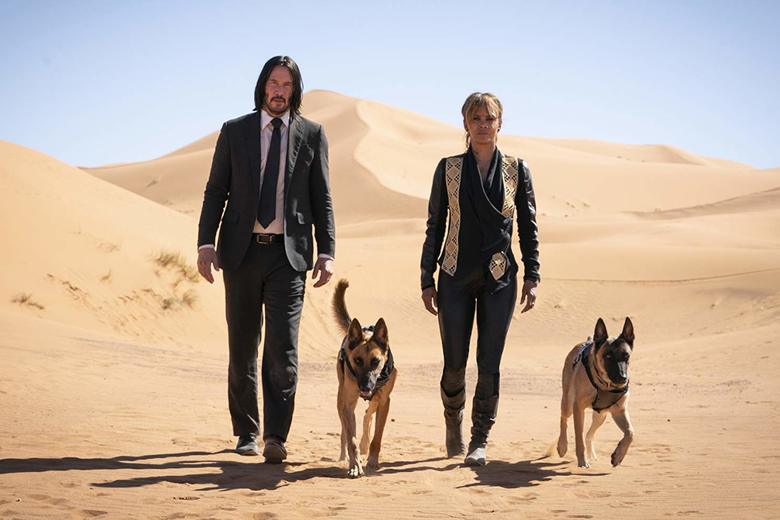 You probably know by now that John Wick (Keanu Reeves) is a dog lover. In the first movie of the franchise he wreaked bloody vengeance after the death of his beagle puppy.

In John Wick 3: Parabellum, Wick turns to an old friend for help when he is on the run with a $14 million dollar bounty on his head. That friend? Sophia, played by former Catwoman Halle Berry. In this film, Berry’s character has an affinity for canines rather than felines as she has two Belgian Malinois dogs.

That posed a bit of a headache during filming, as where John Wick 3 filmed in Essaouira, Morocco, seemed to have a bit of a cat problem. As Director Chad Stahelski told Entertainment Weekly, “The Moroccans are not big on canines. Love a f*cking cat, though. There had to be thousands. We went there in the winter when we scouted and they weren’t that prevalent. We were like, there’s a few cats here, we’ll get a cat department, and we’re going to move all the cats out. We show up to shoot and there were literally a thousand cats, okay? And the cats have balls of steel. They’re not afraid of anything.”

The cats were so numerous that “We had to build massive walls of cages,” Stahelski said. “They’re just stray cats, but we want to be good handlers. So, we built little cat houses, put them in, had to feed them. We had walls of cats… The amount of f—ing cat food — we were probably feeding more cats than people on set.”

Despite their efforts, strays would continue to wander on set. This caused a particular issue when the time came to film what has been called one of the film’s best fight sequences. In that massive fight scene Wick, Sophia, and her dogs take on a small army. However, it was sometimes difficult to have the dogs focus on their movie enemy when their natural enemy would come strolling by. One of the dogs might spot a cat and take off, ruining a shot. But they eventually managed to pull off the scene. You can see it in the movie which was released on May 17. You can also see a bit of the dogs in the movie trailer below.

So will cats be persona non grata in future John Wick movies? Or will we see some cat love alongside the puppy love of our title character? Only time and a possible John Wick 4 will tell.